ARCHIMEDES: A Really Cool High Impact Method for Exploring Down into Europan Subsurface 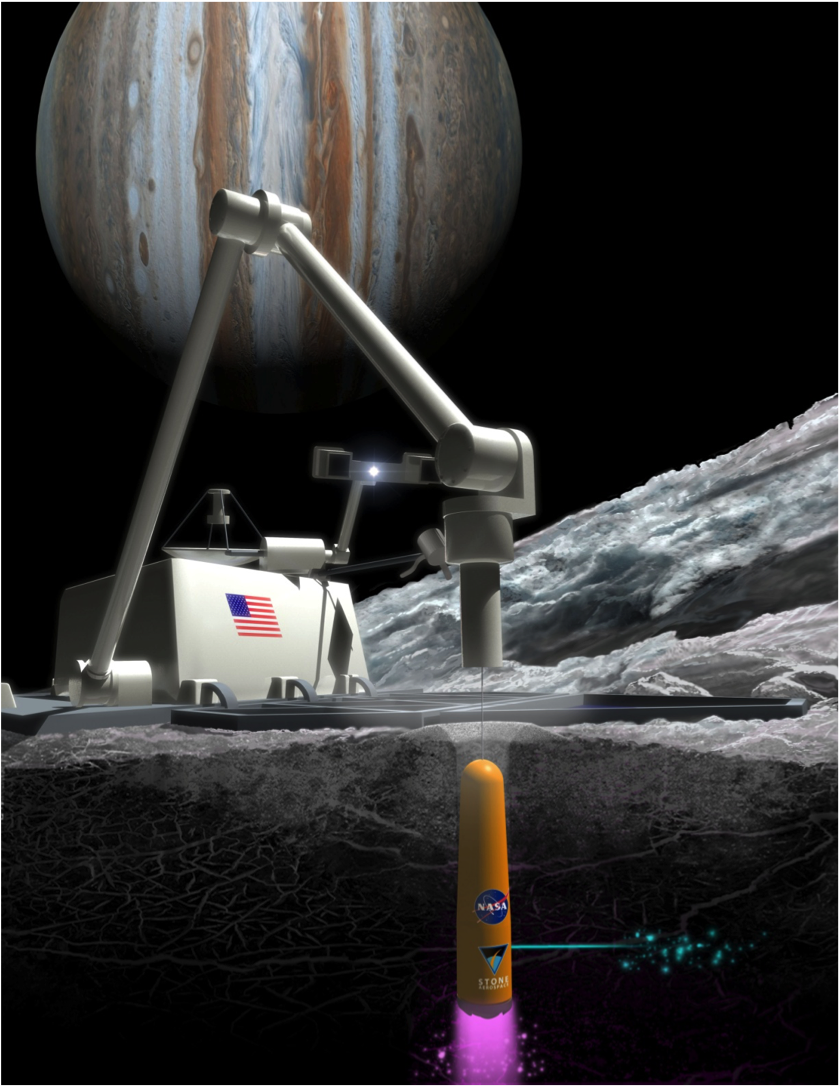 Artist’s concept of the ARCHIMEDES direct laser penetrator on Europa.

ARCHIMEDES is the latest cryobot under development in the Stone Aerospace shop and it uses Direct Laser Penetration (DLP). DLP represents a novel approach to penetrating ice. Heretofore, ice penetration systems have fallen into three major classes: mechanical drills, hot water drills, and passive melt probes. In the ARCHIMEDES Project we are developing and testing a 5 cm diameter probe that injects the power from a 5 kW, 1070 nm laser into ice.

DLP works because of a particular feature in the transmission spectra of light in water and in water ice. At approximately 1070 nm (near-IR) light is preferentially absorbed in a volume of ice ahead of the probe with only a small amount being absorbed in the liquid water film below the nose of the probe. The ice melts and the probe descends under its own weight. The approach is remarkably efficient because the energy is coupled directly into the ice with negligible sidewall heating loss. In short, we are able to put the energy right where we want it and not waste any heat where we don’t need it.

The DLP approach injects 5 kW of laser light directly into the ice. We use a near-infrared wavelength of 1070 nm. The laser light comes from a commercial off-the-shelf source, an IPG Photonics YLS-5000 fiber laser. The laser light is transmitted via a thin fiber optic tether. Since meltwater will refreeze behind a probe as it descends, the fiber tether must be spooled onboard the probe, so that the line unspools as the probe descends. The light exits the fiber transmission line. Then, the beam is shaped and focused using a series of lenses at the nose of the vehicle. Upon exiting the final optic, the laser light is absorbed in the ice below.   The probe descends as the ice melts. The fiber optic line can be wound quite tightly.  This means that 100+ meters of fiber can be accommodated onboard the penetrator.  Therefore the probe has a significant range. 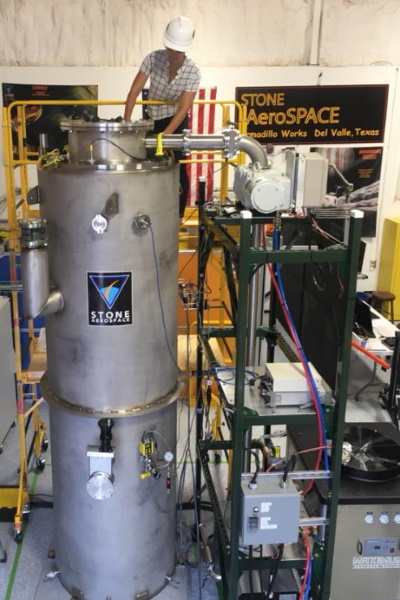 In order to test ARCHIMEDES in a Europa-analog environment we designed and built a facility called Europa Tower at the Stone Aerospace lab. Europa Tower is a cryogenic vacuum chamber.  It allows us to assess the probe’s performance in harsh environmental conditions similar to those on Europa’s surface. The chamber keeps ice at a temperature of 77 Kelvin and subjects it to a vacuum of one millitorr. Over the course of 2019 ARCHIMEDES DLP probe has undergone several successful tests melting through this “cold ice”. Significantly, it has proven to be 18 times faster and eight times more efficient than passive heating.

Particularly from the planetary perspective, DLP may present a unique solution to what is known as “The Starting Problem” for cryobots attempting to initiate travel into the ice shell of Europa or other Ocean Worlds. The Starting Problem is where the cryobot must begin descent at the lander in hard vacuum at 77 Kelvin temperature. The lack of atmospheric pressure precludes the formation of liquid water.  Therefore, energy dumped into the ice will cause it to sublimate, not melt.

Fortunately, DLP has no problems operating in vacuum. The beam will initially cause a hole to form with the ice sublimating to space, but after a short descent distance the sublimated ice will refreeze on the upper sidewalls of the hole and will eventually close it off, allowing vapor pressure to build. Once that happens the DLP probe will proceed downward in a fashion similar to how it would behave on Earth. While the limitations of DLP may preclude it’s use as a means to access the ocean, it may be a useful tool for investigations of the top ten to 100 meters of ice on Europa or the Mars polar caps. 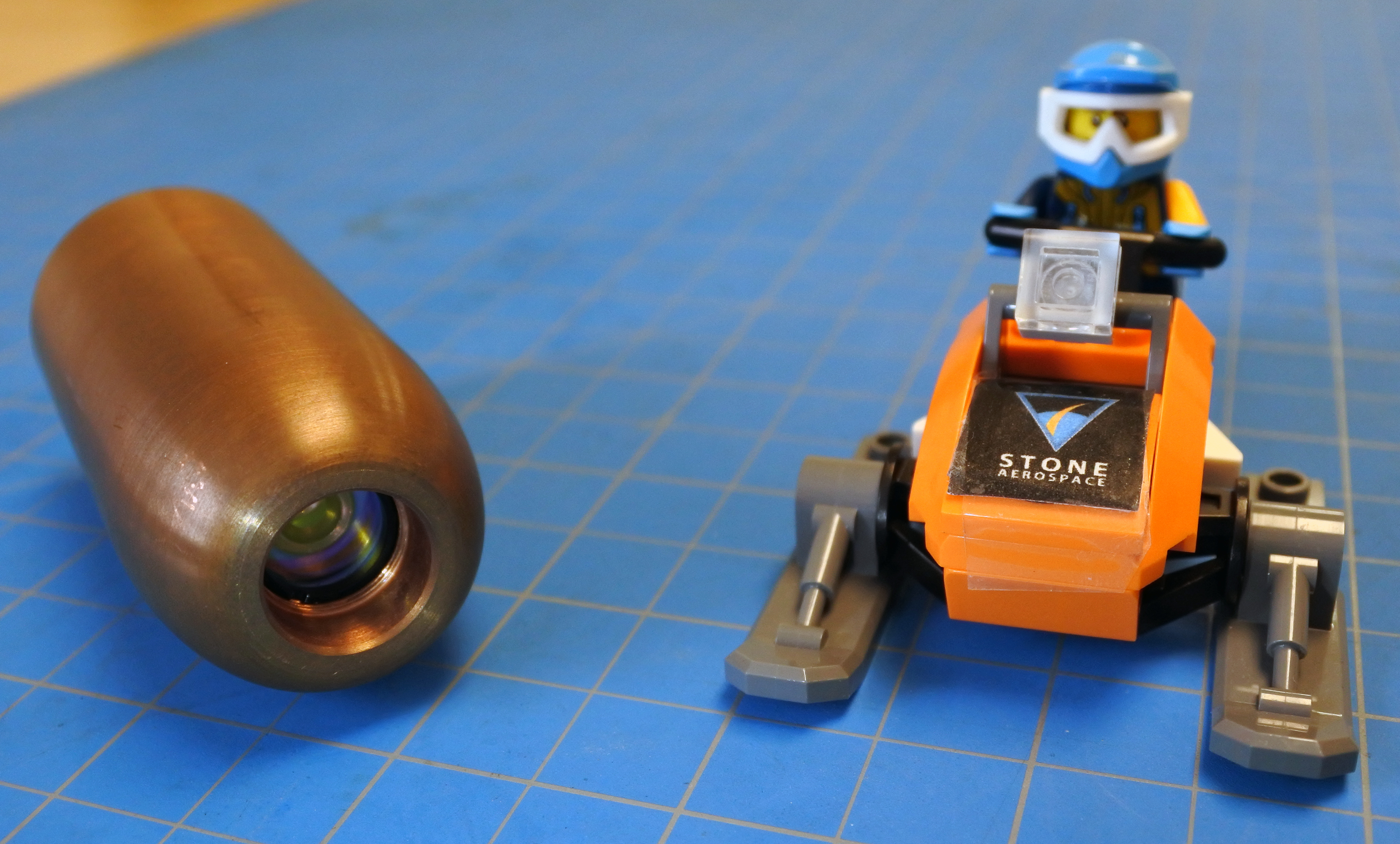 Our short DLP probe with a Lego snowmobile for scale. It has a diameter of 32 mm.

The compact and relatively simple DLP design also means that the probe can be sterilized prior to deployment.  This protects the ice column and subsurface water body from contamination. Furthermore, since the ice refreezes behind the probe as it descends, it is likely that forward contamination through the ice column (i.e., upper melt water mixing with deeper melt water) is minimized.

There are downsides and limitations to DLP. First of all, while laser light transmission through the fiber optic line and from the probe into the ice both boast very high efficiency, the laser source itself must be powered. The conversion from electrical energy used by the laser source to optical energy in the laser beam output is only about 50% with current technology. Second, we have only tested DLP in pure water ice at this point. It’s likely that impurities may pose problems. Therefore, we plan to perform tests of DLP performance in briny ice as part of the ARCHIMEDES project. Indeed, solid impurities will likely stop forward progress of the probe entirely.

Another enabling factor for DLP is the use of fiber optic line to transmit the laser light from a laser source on the ice surface to the probe. Laser light is transmitted very efficiently over fiber. In 2010 we conducted tests relating to high power optical energy transmission through silica fibers.  In particular, we transmitted 11 kW of optical power through 1.1 kilometers of such fiber.  We found that power attenuation is 12% of total power lost per kilometer of fiber.  Such attenuation must be taken into account in mission planning. Even so, fiber can be spooled onto a DLP cryobot at relatively small diameters, allowing for a highly efficient probe.

This video shows an early Direct Laser Probe (DLP) test in “warm” ice (-10 C). The video has been sped up 5X. The purple flash you see in the ice ahead of (below) the probe is not visible to the human eye. However, the camera does pick it up. In this test we ran 5 kW of power out of the laser. The descent rate, at this power, in this temperature of ice, was 22 m/hr. This prototype probe is 5 cm in diameter.

This time lapse video shows the ARCHIMEDES Probe descending into 77 Kelvin ice in the Europa Tower cryovac test chamber. Video has been sped up 30x.  This probe is 3.2 cm in diameter.

Applications in Polar Research on Earth

Direct Laser Penetration could be used in terrestrial glaciated environments as a clean-access tool to investigate thick ice sheets, ice shelves, and subglacial water bodies. Theoretically, the approach can be scaled to work through more than 4 kilometers of ice (e.g., the full thickness of the Antarctic ice sheet) at very high-power levels. At high power, DLP could also be used to reach deep subglacial lakes in very short times, theoretically 16 hours for 4 kilometers with a 10 cm diameter vehicle.  Additionally, it could be used to transit through ice shelves and install instruments in subglacial water bodies or to rapidly install fiber sensor arrays.

What’s more, the direct laser penetrator would have a much smaller logistics footprint than a typical deep ice mechanical or hot water drilling rig. The field DLP equipment would mainly consist of a laser source unit (typically about the size of an average refrigerator), and a 50 kW generator.  Consequently, used in the field, DLP would be easily deployable.

ARCHIMEDES is supported by NASA via COLDTech Grant NNX17AF64G.  The initial work on a DLP prototype, shown in the video above, was supported by the SPINDLE Project, NASA Grant NNX15AT32G. ARCHIMEDES and the DLP approach are one of the latest developments to come out of 10 years of ice-penetrator work at Stone Aerospace.

In 2010 NASA ASTEP Grant NNX11AJ89G funded our first cryobot, VALKYRIE. VALKYRIE used laser light in a different way. Instead of shining the light directly into the ice, we spread the laser beam (5 kW, 1070 nm) evenly over the inside wall of a tubular heat exchanger.  Meltwater was drawn in from the nose of the probe, and routed through the side walls of the heat exchanger.  Then, now heated, the water was pumped out through jets in the nose, creating a closed-cycle hot water drill. The project was coupled with astrobiological investigations and the entire system was fielded to the Matanuska Glacier in Alaska in 2014 and 2015.

We are just now starting work on a new type of cryobot system, THOR, funded by NASA PSTAR Grant 80NSSC18K1738. We’ll be taking it back to the Matanuska Glacier in 2020. Stay tuned!