During the past six years Stone Aerospace has developed two generations of autonomous underwater vehicles and used them in a wide variety of hazardous environments from the original exploration and mapping of deep hydrothermal springs to sub-glacial lake exploration and science missions in Antarctica. We designed the first of these vehicles – DEPTHX (DEep Phreatic THermal eXplorer) – to test the ability of a mobile robotic platform to autonomously explore and map in 3D where no external navigation aiding is possible and where no prior map data exists. This was part of NASA planetary robotic efforts directed towards enabling a future mission to the sub-surface ocean of Europa, the 4th moon of Jupiter. DEPTHX broke new ground on several fronts:

Figures 1, 2, 3, and 4 show the patent-pending DEPTHX design.  We designed it for survivability and precision maneuvering capability in 3D space. For example, the external geometry is an axi-symmetric ellipsoid of revolution, which eliminates snag points in unknown and cluttered environments. It also allows the vehicle to be “spun up” in autonomous mode with very low energy. This technique, combined with high-resolution sonar imaging systems and precision navigation allows for dense geo-registered 3D maps to be rapidly generated in unknown environments. It is this dense 3D point cloud that serves as the feedstock to the 3D-SLAM navigation engine described below. 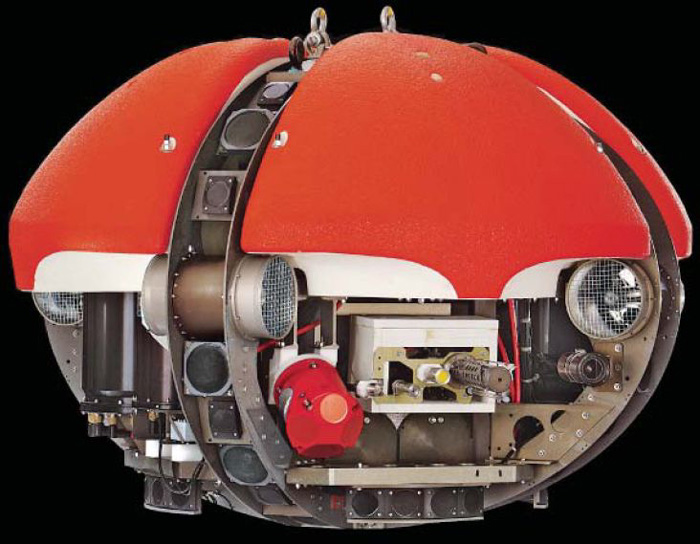 Figure 2: Vehicle-centric coordinate system for the DepthX AUV. The vehicle is ellipsoidal with a major axis of 2 m, a minor axis of 1.5 m and a mass of 1.35 metric tonnes. It contains a large central payload bay for rack mounted tools, instruments, and autonomous sub-systems. 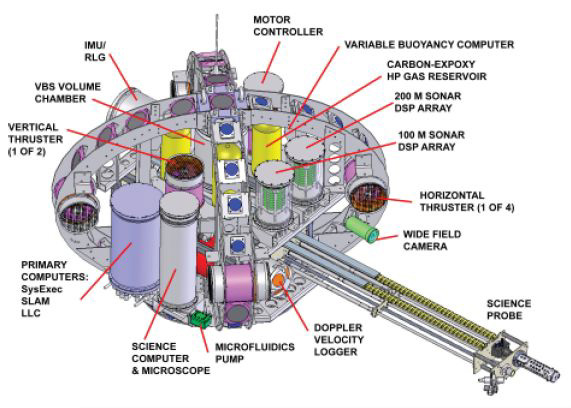 Figure 3: Vertical module design. This allows for vertical assembly of the vehicle as well as the operation of all electronics in their assembled configuration with the pressure housings removed. The extensible science probe retracts flush with the vehicle ellipsoid during normal transit and exploration operations. 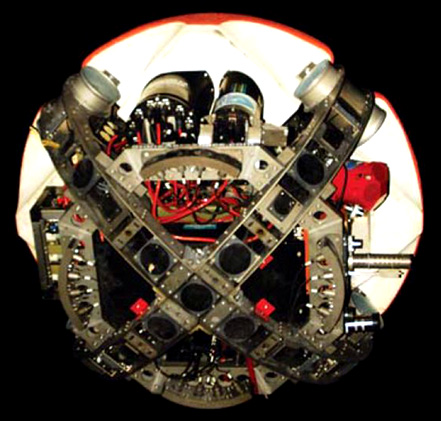 DEPTHX was unusual in the world of autonomous undersea devices.  It actively controlled precise motion in all 4 degrees of freedom (X,Y,Z, and yaw, with pitch and roll intentionally damped to provide vehicle precision stability for instrument pointing).

DEPTHX used two independent navigation systems. The high-grade dead reckoning system used an inertial reference unit as well as a ring laser gyro.  In addition, it used a redundant pair of depth sensors and a doppler velocity log. This instrument collection, combined with onboard custom code and Kalman filter, demonstrated long-range open-loop control on the order of 0.05 to 0.1% of distance traveled (less than 1m of error per kilometer of traverse). The second navigation engine was 3D-SLAM.  The sensor architecture needed to implement 3D-SLAM drove the ellipsoidal shape and the exoskeleton frame, but in additional made the vehicle survivable.  Hence the vehicle is literally an all-seeing eyeball, with tight beam sensors pointing in all directions (Figure 5). Using forward- and backward-looking range sensors and sophisticated real-time mathematics, DEPTHX can locate itself within a geometric environment, even one that it explored for the first time only seconds previously.

The 3D-SLAM accuracy on DEPTHX is approximately 1 meter anywhere within a 500-meter cube about the vehicle. To illustrate, figures 6a-e show the steps involved: the exploration process creates the 3D map (6a); but the map has noise (6b); however probabilistic sensor models are used to discriminate between what is real and what is noise (6c); then we achieved a noise-free, feature-rich 3D model after several iterations (6d); finally, the vehicle determines, through a computationally intense phase, an estimate of its position and orientation that produces the least error with the current 3D map (6e). This combined navigation system (dead reckoning and 3D-SLAM) enabled the autonomous original exploration of the Zacatón hydrothermal spring complex in Mexico in the spring of 2007 (see Figures 7 and 8). 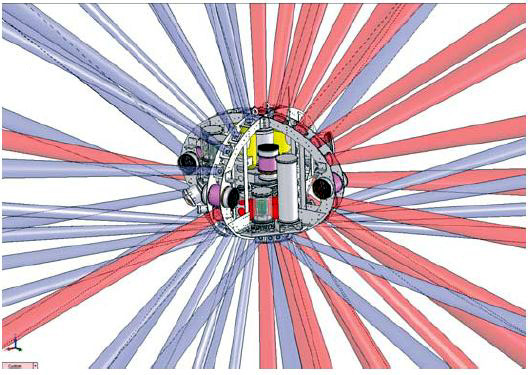 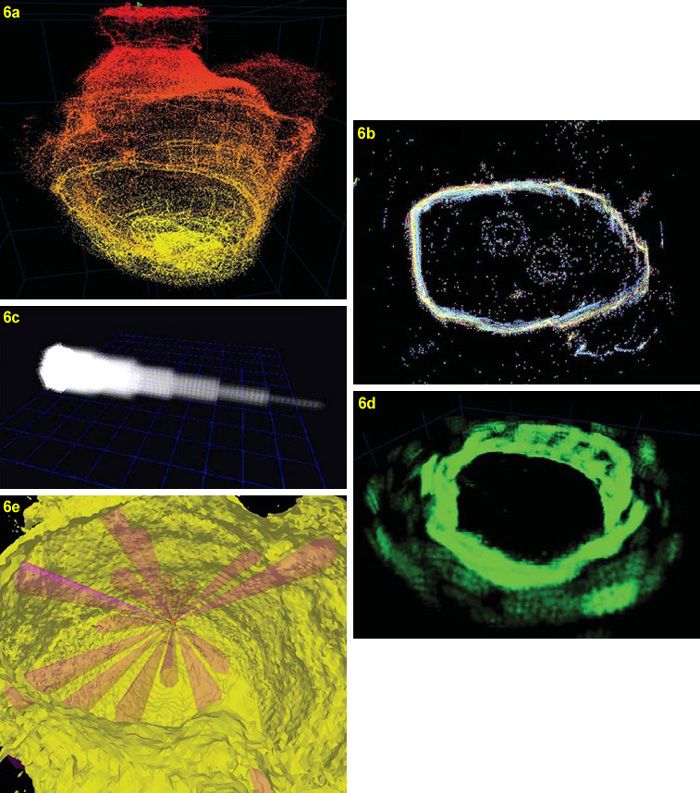 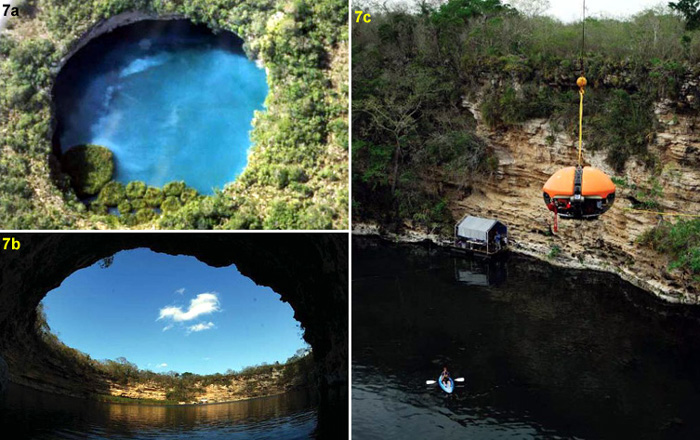 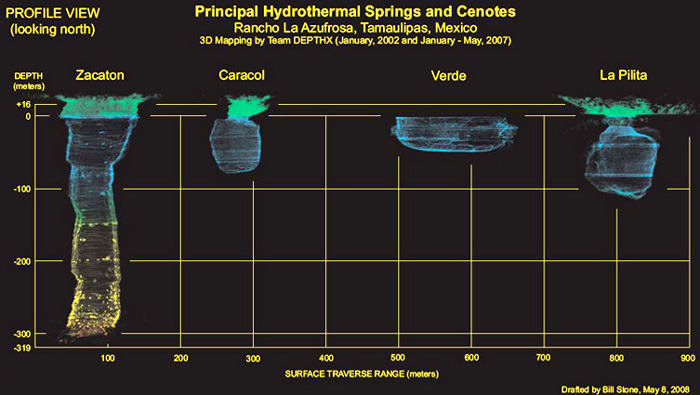 Figure 8: 3D maps of the cenotes. During three months of fieldwork in the spring of 2007, DepthX produced 3D underwater maps for all four of the major hydrothermal springs of the Zacatón complex. Then, we merged laser radar data (above water) with the geo-registered underwater data to form the composite image shown.  DepthX accomplished all exploration autonomously with no human guidance once a mission began.

DepthX’s science payload consists of a water and rock core sampling system that extends 1.5 meters from the vehicle in hazardous wall proximity zones (see Figures 9a-c).  This system can be used to extract rock samples to depths of 1,000 meters. 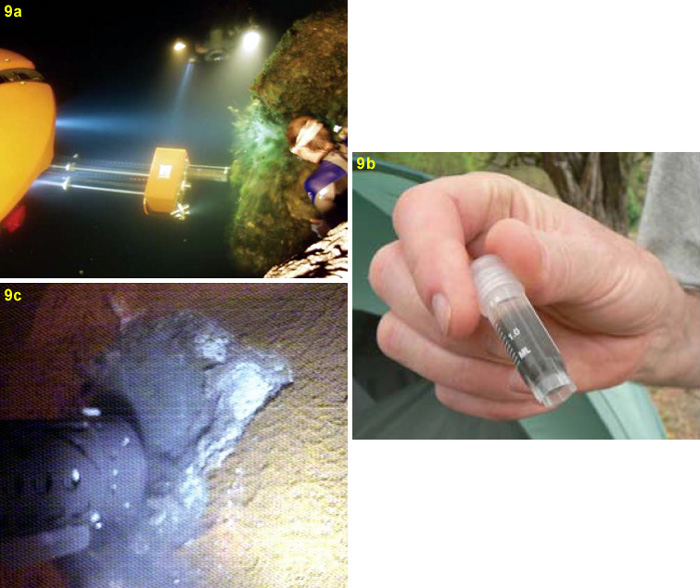 Figure 9: DepthX Science Payload.  We conducted an autonomous science program at Cenote Zacatón.  An extendable probe (9a) collected water samples from the cenote and rock core samples from the cenote wall. The local probe camera captured the image shown in 9c.  At this time, DEPTHX extracted a core from the wall of the cenote at -273 meters. (See video below.)  Significantly, DEPTHX acquired this and other such samples automatically, operating under its own criteria. The highlight of this was a May 16, 2007 mission in which the vehicle was instructed to autonomously explore down into the cenote seeking chemoclines and, if it found such a layer, select the safest approach to a wall and collect a core.  The samples collected during these missions have since led to the discovery of six new divisions of bacteria.  Less than one hundred were previously known on Earth at the time.

DEPTHX extracts a core from the wall of Cenote La Pilita.

For more information on DEPTHX please see our daily updates from the field in Tamaulipas, Mexico.