A prototype laser-powered cryobot for clean subglacial access and sampling

VALKYRIE is an ice-penetrating robot, a laser-powered cryobot, developed at Stone Aerospace under a NASA ASTEP grant. Its mission is to test new strategies and technologies for descending through the thick ice shell of outer-planet icy moons, such as Europa.

VALKYRIE uses a unique power source: a high-power industrial laser transmits infrared light to the robot via glass fiber. Upon reaching the cryobot, the light beam is expanded onto a dispersion mirror. This in turn redirects the light to strike the sidewalls of a cylindrical heat exchanger attached to the vehicle nose cone. As the sidewalls warm up from the infrared light, it also heats water cycling through the heat exchanger. The robot can descend either “actively,” jetting hot water out of the nose cone or “passively,” using just the heated nose cone. The nose cone design incorporates a primary water jet on the centerline and secondary off-center jets that can be activated for turning. In active jetting mode, intake ports in the nose pull water into the heat exchanger and the nose cone jets pump out warmed water. In this fashion the becomes a closed-cycle hot water drill.

To identify, and thus possibly avoid, obstacles in the ice, University of Colorado, Boulder, designed and built a novel end-fire Synthetic Aperture Radar and incorporated into the robot design. Additionally, VALKYRIE carries a science payload to investigate microbial activity in the ice column. The payload consists of a fluorescence-based multi-channel flow cytometer from Leiden Measurement Technology as well as water and filter sample collection systems. Autonomous sample collection algorithms were developed which use real-time data streams from the flow cytometer. This determines optimal triggering and timing of sampling routines. The Christner Lab at Louisiana State University subsequently processed the samples.

The team tested VALKYRIE over the course of two month-long field seasons on the Matanuska Glacier in Alaska in 2014 and 2015. The initial prototype measured 25 cm in diameter by 2.5 m in length.  The first season tested the vehicle’s descent speed and turning capability. The robot descended to 30.52 m depth at an average rate of 0.9 m/hr using active jetting.  In addition, using turning jets, the vehicle achieved a 7-degree diversion angle off dead vertical.  Due to time constraints, however, we terminated the tests, with the cryobot fully functioning and all systems go. 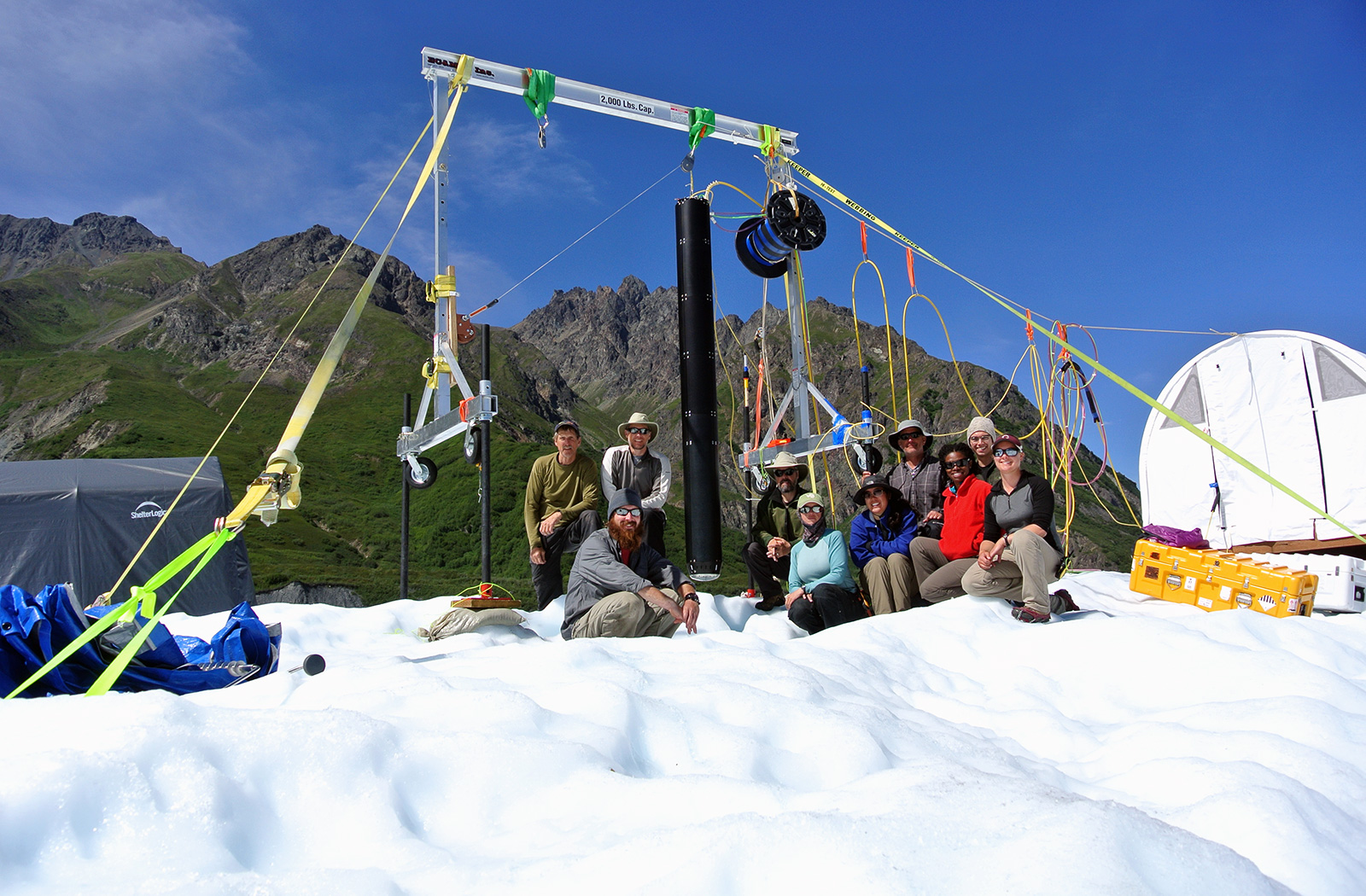 We integrated the science payload into the vehicle in the second field season. The team tested sample collection algorithms, and then the cryobot collected filter and water samples for subsequent laboratory analysis.  We tested the SAR system on the glacier independently.  It showed ability to detect – and model for obstacle avoidance behaviors – a 1 m object 80 meters in advance.

The technology developed on VALKYRIE will help us learn about how to penetrate ice on other ocean worlds. In addition, it may provide alternative access to deep subglacial lakes on Earth with minimal contamination. We can sterilize the robot and allow the melt hole to refreeze behind it, which then minimizes forward contamination.  Successful completion of VALKYRIE has led to the development of advanced cryobot concept designs for the NASA-funded SPINDLE project.  SPINDLE will utilize Antarctic ice sheets as planetary-analog testbeds.

Read more about VALKYRIE in our field notes.