ARTEMIS (Autonomous Rovers/airborne-radar Transects of the Environment beneath the McMurdo Ice Shelf) is a 20-km-range hover-capable AUV, a hybrid autonomous underwater robotic vehicle. Deployment of ARTEMIS was during late 2015 with the intention to explore and characterize the environment beneath the McMurdo Ice Shelf as an analog to searching for life in ice-covered oceans elsewhere in our solar system. ARTEMIS is part of the Sub-Ice Marine Planetary Analog Ecosystems (SIMPLE) project, supported by NASA Astrobiology.

Built specifically for this mission, ARTEMIS is deployable through a 52″ drill hole in sea ice. It is able to raise scientific sensors into contact with the ice overhead, can collect water samples, navigates autonomously or by pilot command relative to the ice ceiling overhead, as well as being able to dock autonomously with surface recovery equipment.

The large blue bot house sits with the rest of SIMPLE camp on sea ice in McMurdo Sound.

ARTEMIS sits in the bot house.

Maps show the 2015 SIMPLE field camp location and area of study (left). ARTEMIS water sample chambers are primed (middle). A vehicle representation and 3D sonar is rendered in live top and side views while ARTEMIS drives beneath the ice shelf transition (right).

ARTEMIS carries a broad array of sensors designed to record the environmental characteristics as well as biosignatures associated with life under the McMurdo Ice Shelf. Particularly of interest is the environment right at the ice-water interface. Therefore, ARTEMIS carries several upward-looking instruments in a package that can be extended 0.8 m above the main vehicle body to make physical contact with the ice ceiling, while keeping the rest of the vehicle (and its thruster wash) away from the measurement site. In particular, instruments on the ice-contacting tower include: 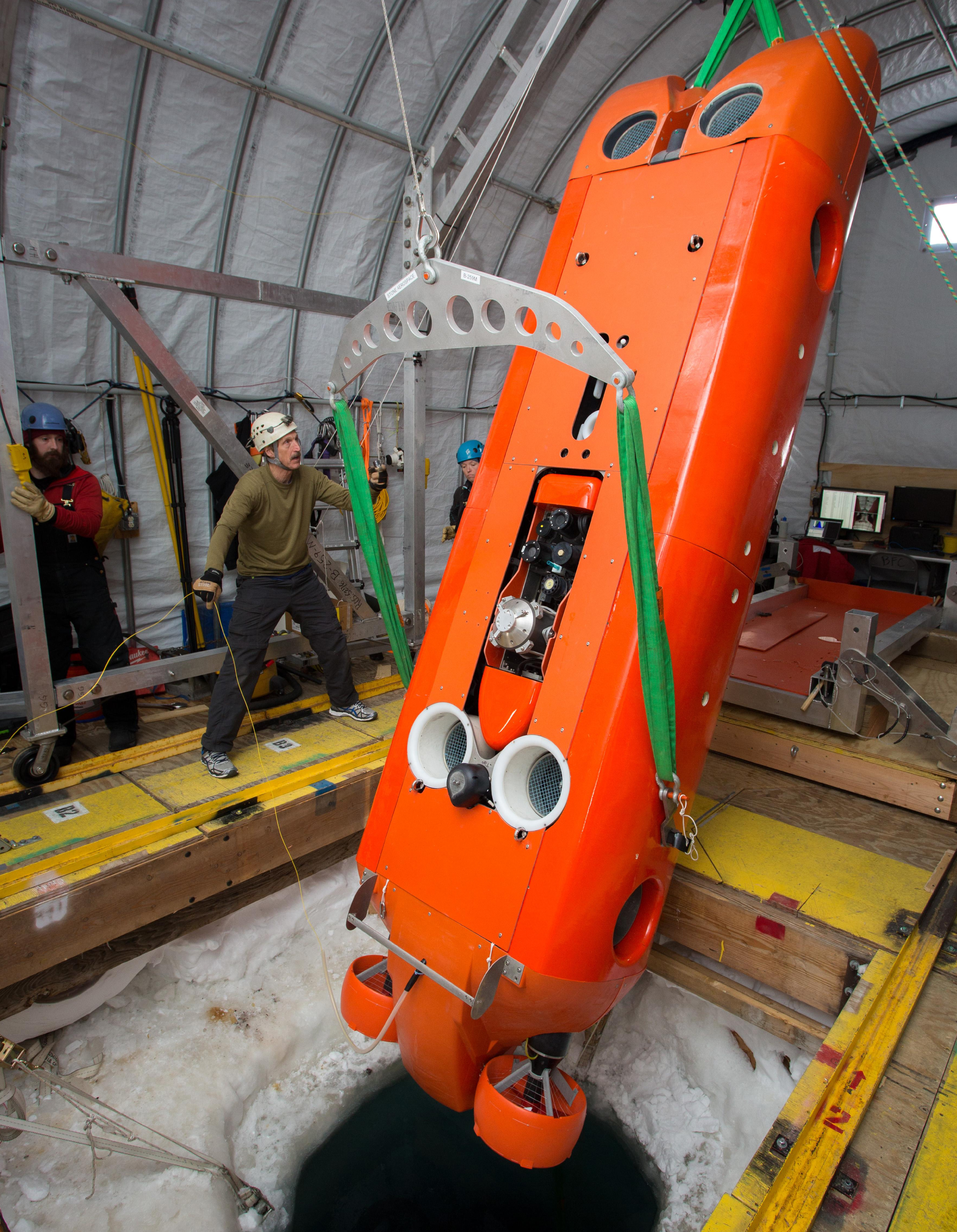 The Stone Aerospace team aligns ARTEMIS with the drill hole prior to lowering the AUV through the ice.

Data and imagery from all instruments are available live via a gigabit ethernet connection over a fiber optic cable spooled out by ARTEMIS.

A 3.5 KHz oscillating magnetic beacon sits passively gimbaled in a vertical orientation within ARTEMIS. Personnel carrying a tuned loop antenna can then localize the null axis of the magnetic beacon from the sea ice above the vehicle, and in turn use GPS to measure the vehicle location in an absolute reference frame.

We used a tuned loop antenna to localize ARTEMIS from atop the sea ice (left), then tracking personnel record the vehicle position while standing above it (right).

ARTEMIS uses a visual homing algorithm to identify, swim toward, and then mechanically engage with a specially-designed illuminated docking bar. The docking bar passes through a latched slot in the nose of ARTEMIS, and then leads to a spherical cavity that mates with a spherical load hitch at the bottom of the bar. Finally, the vehicle pitches up around the hitch to a vertical orientation so that it may be hoisted up through the drill hole.

ARTEMIS swims toward the docking bar beneath Antarctic sea ice, seen from the front (left) and the rear (right).

Renderings showing the ARTEMIS docking sequence: ARTEMIS engages mechanically with the docking bar (middle-right). Then, the docking bar hoists ARTEMIS up through the drill hole (far-right).

Many thanks to the U.S. Antarctic Program and people of McMurdo Station who made the ARTEMIS deployment possible.

ARTEMIS is supported by the NASA ASTEP “SIMPLE” program under grant NNX12AL65G.

We are grateful to RDI/Teledyne for supporting ARTEMIS through loan of the PAVS-150 long-range phased array Doppler sonar instrument.

Read more about ARTEMIS in our field notes.