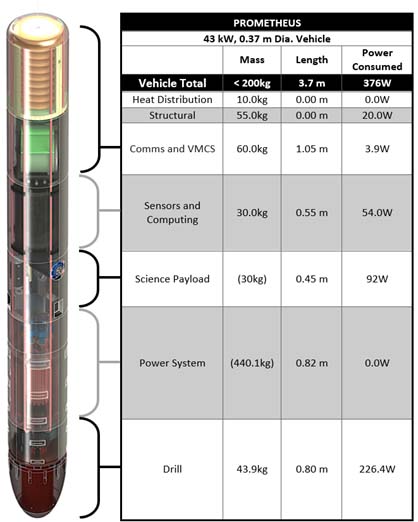 Rendering of the Prometheus probe.

Several of the moons orbiting the planets of the outer Solar System are ocean worlds, which means they hold liquid water oceans. These oceans are hidden beneath thick shells of ice and they are a promising target in the search for microbial life off of planet Earth. In order to search for biosignatures — evidence of life — in these oceans, a robotic explorer would first have to travel through kilometers of ice. This kind of ice-penetrating robot is called a cryobot. The actual conditions that will confront a cryobot in the ice of, say, Europa (the sixth moon of Jupiter), are largely unknown. However, any ocean world cryobot must be able to, at a minimum, negotiate five different operating regimes in order to reach a subsurface ocean. It must: (1) initiate descent into the ice starting at the surface, in a vacuum environment at cryogenic temperatures; (2) transit through brittle, ultra-cold ice; (3) transit through ductile, warmer ice; (4) penetrate or avoid salt and sediment layers, or other obstacles; and (5) detect and transit voids in the ice with final entry into the ocean.

The PROMETHEUS project is led by Stone Aerospace and funded under the NASA SESAME program. The goal of the project is to perform a set of key technology demonstrations that advance the capability to perform ice penetration in icy ocean world conditions. The PROMETHEUS cryobot concept is targeted for deployment on Europa, and consists of a fully-instrumented science vehicle able to actively control descent through the ice shell and into the subsurface ocean. The concept employs closed-cycle hot water drilling (CCHWD) technology as the primary means of penetrating ice and making forward and turning progress. A “passive” (purely conductive) heating system enables penetration starting on the ice surface. The PROMETHEUS design is compatible with a small fission reactor (the NASA Kilopower reactor) and employs a vertical motion control system to guard against falling through voids and to enable controlled entry into the sub-ice ocean. The design, ideally, could achieve a 20 km descent through a Europan ice profile in under a year (Earth time!) and with less than 500 kg vehicle mass. A series of prototype probes are, as of November 2021, being designed, built, and tested in order to advance the Technology Readiness Level (TRL) of the various design elements and concepts.

Two cryobot prototypes are currently in fabrication; each will test and demonstrate the ice penetration technologies of PROMETHEUS under Europan conditions. The Sub-Scale Cryobot is a miniaturized CCHWD demonstrator with both hot-water jetting and passive melting capabilities. While an actual flight-mission cryobot would be larger (similar in size to our THOR cryobot), the Sub-Scale ‘bot is built at a scale designed for testing in the Stone Aerospace cryovacuum chamber, Europa Tower. The Highly Instrumented Passive Probe (HIPPY) cryobot is designed to gather more information on the dynamics of general thermal ice penetrators; it is highly instrumented to allow for precise control and in situ measurement of variables important to thermal modeling. 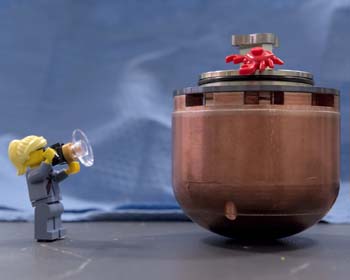 The nose cone for the Sub-Scale Cryobot

The Sub-Scale drills through ice primarily by jetting hot water out of its nose. Hot water jetting is the most efficient way to transfer heat from the interior of the cryobot into the ice. As a bonus, the powerful jets act like a pressure washer, blasting through layers of debris or dirty ice that might be encountered. Large scale hot water jetting is used in polar research on Earth, to drill very deep holes in the ice in Antarctica. With this PROMETHEUS concept we encapsulate that approach in the probe. A variable pump circulates water from the melted borehole to a dual-mode heat exchanger being warmed by variable heaters. In addition, the heat exchanger can be operated in passive mode by heating the nose conductively when no water is available to circulate. Additional variable heaters are incorporated into the shell to prevent the probe from freezing to the borehole walls. An on-board processor integrates data from various sensors, monitors performance and penetration depth, and provides communication to an external console via a tether. 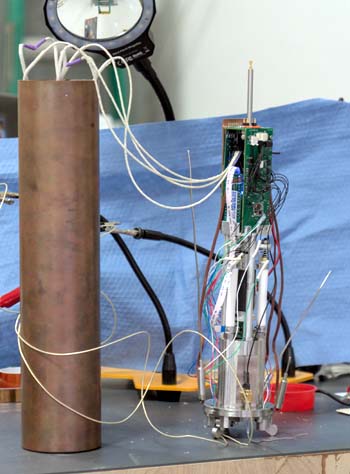 The HIPPY cryobot under construction

Unlike the water-jetting Sub-Scale cryobot, the HIPPY cryobot is a passive melt probe built to address three primary technical goals: (1) to provide detailed data on the most important and previously unvalidated variables in models of thermal penetrator dynamics, (2) to test performance of a passive melt approach to the the cold start problem, and (3) to test elements of an active thermal management system. HIPPY is a purely conductive melt probe with fine control and extended sensing capabilities. Four variable heaters are installed in the nose, and additional variable heaters are incorporated in the shell. These heaters are the active elements of the thermal management system. HIPPY can control the nose and shell heaters based on sensor feedback from numerous thermocouples throughout the vehicle body, calipers that measure bore hole size, an external pressure sensor, and a velocity sensor measuring real-time descent.

When designers are developing a new airplane or car, there are well-established equations and models (e.g. the drag equation, the lift equation, the “simple car” model) that they can rely on to determine how it will perform in different circumstances. These have been developed and validated with decades or even centuries of experiments to rely on. When it comes to the completely alien environment of melt penetrators in ultra-cold ice (around 100 K), models are few and far between, and none have been validated with real experimental data. The Model Validation Probe (MVP) experiments are designed to — for the first time — gather data on the performance of melt probes in cryogenic ice starting in vacuum conditions, as might be found on the surface of Europa or Enceladus. This data has proved invaluable in comparing with the currently theorized models and pointing the way to what the crucial factors in cryobot design will be, and the tools to analyze the missions and vehicles that will one day delve deep into alien worlds.

We designed and built three copies of a Model Validation Probe (MVP). The probe includes on-board spools which allow for continued payout of wires for power delivery, thermocouples, and depth encoders after hole closure. The MVP is made up of 4 separate components: the probe body, a cartridge heater, a power and thermocouple spool, and a depth of penetration spool. The MVP data-taking system collects data on power, temperature, and depth of penetration.

Using our three MVPs, the team performed a series of experiments in the Stone Aerospace’s Europa Tower, a cryogenic vacuum chamber. The chamber is three meters tall, and holds a column of ice that is roughly two meters in height and 75 centimeters in diameter. For these tests, the ice temperature was kept at or below 100 K (-280 °F) and the ambient pressure inside the chamber was kept below 10 mTorr. The tests yielded experimental confirmation of hole closure behind all probes; successful measurement of probe descent rate; and experimental verification of power efficiencies that are in line with existing models.

The design of a vertical motion control system with a vehicle-deployed strength tether that refreezes into the ice behind the vehicle is underway. We are building a dedicated bi-directional servo-spooling bench test system that resembles a system which could fit within a realistic flight vehicle. We have also conducted a trade study of the strength tether.

The bi-directional servo-spooling bench test system consists of a string with motors pulling on each end. One motor represents the VMCS Spooler, aboard the PROMETHEUS cryobot as it bores downward. The other, Event Simulator, applies a “forcing” tension and speed profile on the tether; this simulates events in this mission, while the whole apparatus stays stationary except the tether. This testbed will simulate the actual tether and VMCS spooler sizing and rough geometry for the mission, and to execute a 15 km mission profile.

Tether diameter significantly affects spooler size and weight. Only small size tethers (around 1 mm and smaller) would be feasible for a 15 km tether configuration on a flight cryobot. This tether diameter constraint narrows possible tether materials to only high-performance tethers that achieve the required loads. From our trade study we concluded Vectran and Zylon are the most suitable options for this application, and both options will move forward for future testing. 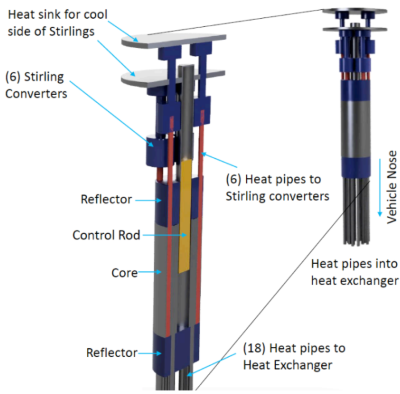 The goal of the PROMETHEUS Nuclear Surrogate is to develop a full-scale non-nuclear stand-in for the Kilopower reactor for use in future system and component tests. Nuclear thermal sources have rigid design constraints and the vehicle must be designed to accommodate proposed flight power source.

Kilopower was designed for operation in the vacuum of space. Operation inside the Europan ice offers a much different thermal and nuclear physics environment. Consequently, the off-the-shelf design of a Kilopower reactor is suboptimal for this environment. Being surrounded by ice (a neutron reflector) will also have an effect on the operation of the reactor if not taken into account.