We made rapid progress today, despite the ever-increasing bad weather (from the same arctic front that dropped temperatures in Colorado far below zero – project microbiologist John Spear wrote by email indicating that it reached -25F in Golden, but here in Tamaulipas it came as a steady cold downpour). 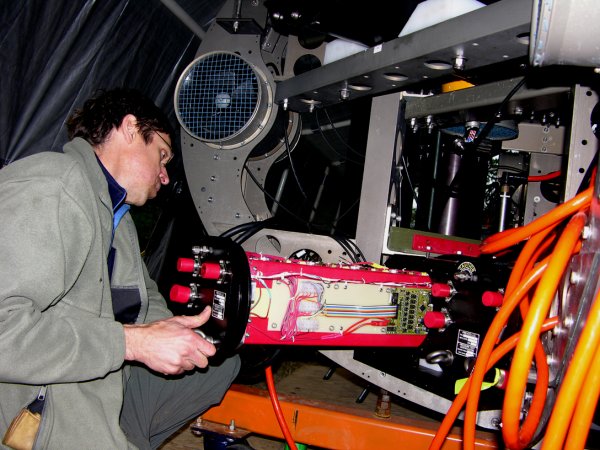 Above: John Kerr carefully loading Battery Pod 1 into DEPTHX. Each of the two Lithium-Ion battery stacks contains the energy equivalent of 6 lbs of TNT. 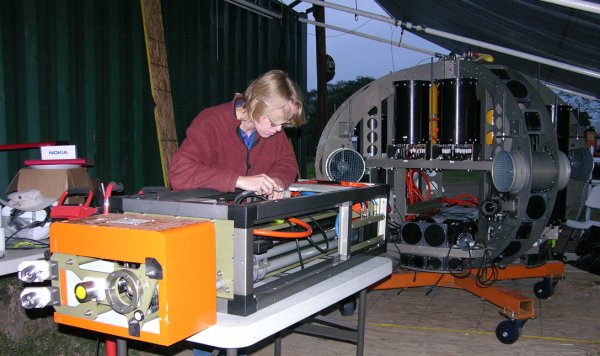 Above: Vickie Siegel works on the water sampler sub-system of the biology payload for DEPTHX.

Both onboard battery systems were successfully brought online today and after a complete change of all canister and cable connection orings we loaded the two Li-ion packs into the bot (see photo). It is difficult to explain the care and attention that one must pay to such a high energy source, but the following energy conversion may be of help: each battery pack in DEPTHX carries the energy equivalent of 6 pounds of TNT. Having loaded all of the main computer and electronics pressure housings we turned our attention to the science package, where changes had to be made to place the water collection containers in an easily accessable outboard location so that they could be removed at the conclusion of a science mission without disassembling the entire probe sub-payload. By 10pm we had all systems installed and had confirmation of hardware powerup and software communications with the main cPCI computer pod, the guidance unit, velocity logger, environmental sensor suite, depth sensors, batteries, science package, and the 200m obstacle avoidance sonar array. Only the motor controllers and 100 m sonar arrays remain to be tested in the morning before the bot is fully operational. Marcus Gary left basecamp around 3pm to pick up the Carnegie-Mellon portion of the crew at the Tampico airport. They arrived just before midnight. The rain is coming down hard now.