FIRST DATA: Today was a milestone for Team DEPTHX. The vehicle made its first true exploration run at Cenote La Pilita (that is, it built a 3D map of terrain never before seen by man). Mission control was established in two large tents beside the 25 m diameter cenote. Marcus Gary and John Kerr managed the “sky trak” mobile hoist to get the vehicle in the cenote whereupon John spent a fair bit of time in the 32C water performing fine tuning of the vehicle buoyancy by adding small lead drop weights. For these initial missions, largely because of the unknown spatial extents of La Pilita, we equipped the vehicle with a 2.5mm diameter Dyneema safety tether (breaking strength 1.5 metric tons) and a 1 mm diameter fiber optic link for observing the real-time behavior of the vehicle at mission control. 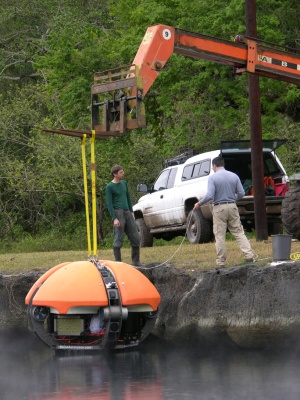 Importantly, besides providing a huge stream of state and sensor data (see previous blog image of the microRAPTOR real-time vehicle state software output) we were able to monitor live what the vehicle was “seeing” through an openGL visualizer that showed a representation of the vehicle along with sonar beam models for the 54 discrete sonar transducers that build the world map about DEPTHX. The present onboard software can reject spurious readings in real time—important for the upcoming geometry-based navigation tests. Also piped up are video images from the three onboard cameras. An example of the output from the wide field science payload camera is shown below in the screen capture from one of the mission control laptops.

Left: DEPTHX being lowered into the 32C hydrothermal spring of cenote La Pilita. 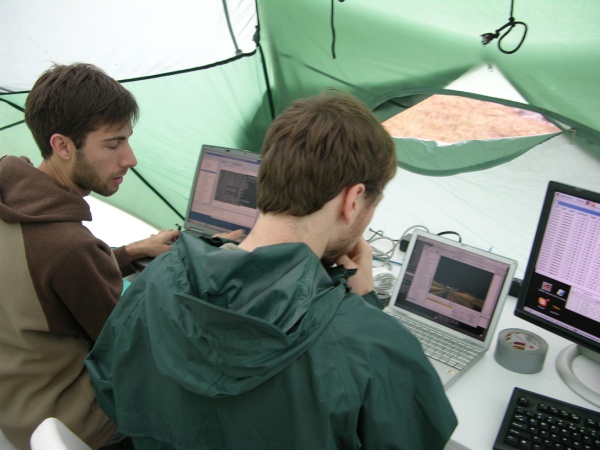 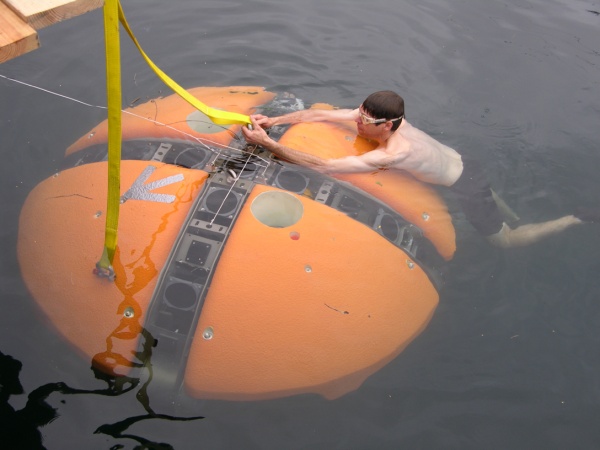 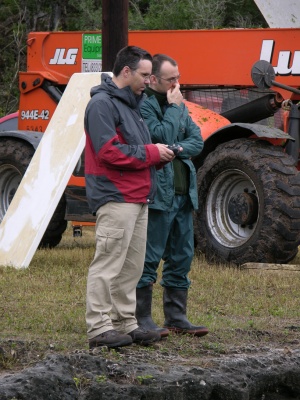 Following a series of warmup runs the vehicle was commanded to undertake a vertical powered descent mission to a maximum depth of 100 m while insuring that it maintained a “keep out” zone of 10 m about the vehicle and a minimum 5 m standoff distance to bottom. The resulting map (see figure below) shows 340,000 sonar wall hits during the course of an approximately 1 hour duration mission. During the descent the vehicle was set in a uniform rotation so that the sonar arrays “scanned” the wall, creating a high density fill factor.

Left: George Kantor (left) and Dave Wettergreen (both from Carnegie-Mellon University) contemplate the performance of DEPTHX at cenote La Pilita.

The real power of the 4-Pi steradian imaging system is that DEPTHX can simultaneously look in all directions. This, and the fact that the vehicle is descending while it rotates, provides the maximum opportunity for filling in voids that would otherwise not be seen by normal planar line-of-sight imaging systems. This capability is crucial to the implementation of 3D SLAM, which we will begin testing towards the end of this week.

Of particular interest, the plan view of the map (left image below) shows the presence of a 20 m diameter tunnel leading off from the western wall of the chamber at a depth of approximately 40 m at the roof and leading in a northwest heading. Similarly, there appears to be a broad bulging in the room in the northeast corner at about the 30m depth level. The vehicle came closest to the floor on an eastward sloping incline; what happens to the west (which is in the direction of cenote Zacaton—the target of the DEPTHX finale field exercise in May) is unknown. We hope to fill in more data in the coming days leading to an untethered subsurface mission in a full 3D labryinthine environment. 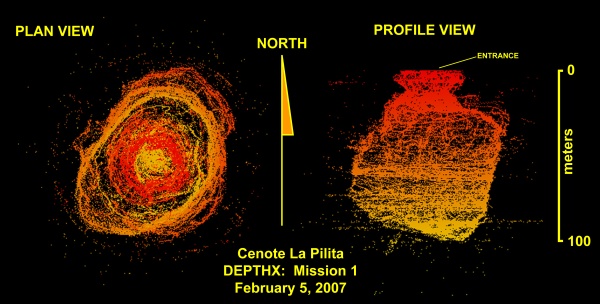 DEPTHX 3D map of Cenote La Pilita, created February 5, 2007 during the first true exploration mission for the DEPTHX project. The map is comprised of 340,000 individual sonar “hits”. In general the vast number of points clearly define an enormous subterranean submarine void—the full extent of which will not be determined until further off-axis exploration in the coming days. Outlier points are raw data as recorded by DEPTHX; some of these were a result of an incorrectly cabled sonar transducer; some represent “multipath” signal bounce (and therefore non-existent geometry); and some likely represent sparse new data suggesting potential voids to be explored on subsequent missions. (click here for a bigger version of this map) 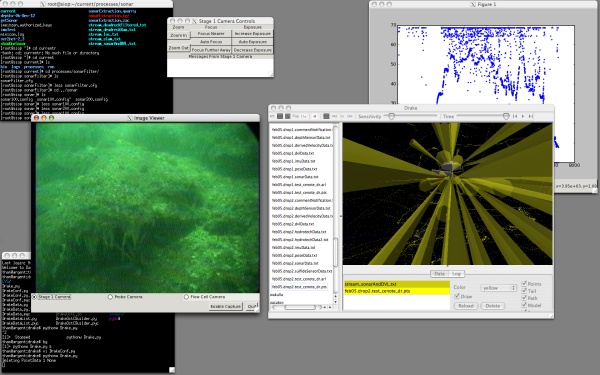