Wall and Water Sampling + Pre-SLAM: Most of the daylight hours today were consumed with tests of the various Science Payload sub-systems, mainly pre-programmed capture of up to five independent 2 liter water samples and the test firing of the coring tool, which extracts a 1 cm diameter x 3 cm long bio sample from a candidate wall location—see the images below for one of many such test sequences conducted today. In these photos you can see the Science Payload sampling probe in its extended position. The purpose of this design was to permit the main DEPTHX vehicle to “stand off&#x201#x201D; from areas of potential biologic interest and send in a non-disturbing probe. Bringing the entire vehicle up against any surface in a 3D labryinthine environment is fraught with possibilities for entanglement (and therefore potential loss of the vehicle) so in general we maintain a significant proximity fault “keep out” zone of 5 m radius from the vehicle. Only during proxops (proximity operations) do we intentionally allow the vehicle to get within 1.5 m of the wall; the probe then goes the last distance to look at what’s on the wall. This also has the benefit of minimizing thruster disturbance of wall materials. 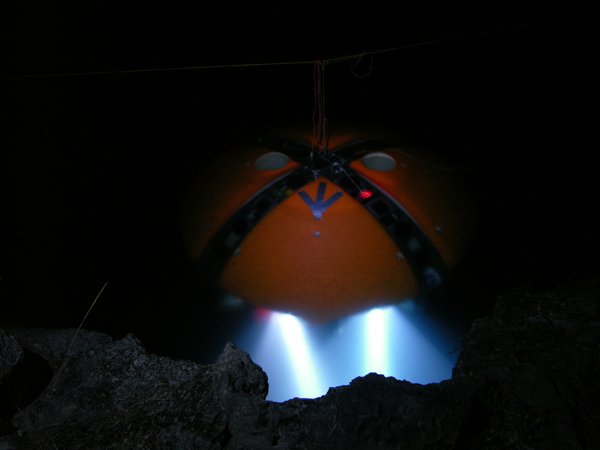 Above: DEPTHX begins autonomous mission 7 after dark. The bot made a powered descent to 80m and successfully conducted exploration circuits at three depth levels. 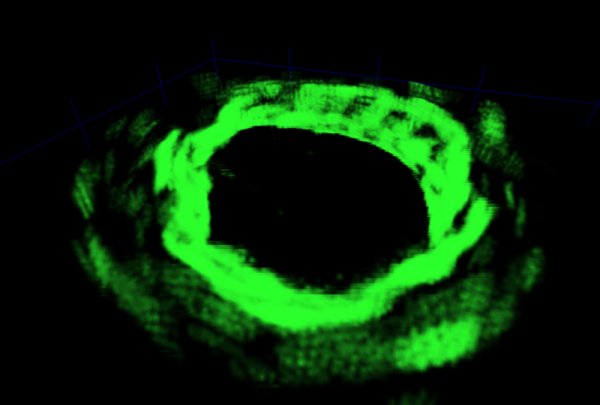 Later in the evening we began a series of more ambitious autonomous missions in which we sent the bot on a pre-programmed trajectory to various depths at which point it would then execute a triangular-shaped maneuver – moving 15 m along each leg of the triangle and then returning to the original vertex. The bot would then move to a shallower depth level, about 15 m higher than the first, and duplicate the maneuver. After doing this at many levels it would return to its “home” position, which is shown in the above night shot of the bot with its twin HID head lights blazing. The first such mission was attempting to reach 60 m depth when an over-temperature fault indicator on the inertial guidance unit tripped and the vehicle fell back to an abort behavior – surfacing along a path that placed it at the geometric centroid of the cenote. From the surface, except for the data being displayed on the microRAPTOR computer console interface, there was no indication that anything was different until the HID lights began making the entire cenote glow from a depth of around 20 m. After consulting the IMU operations manual we raised the temperature fault trip point and sent the bot back down, this time to -80 m. It then successfully conducted two back-to-back autonomous missions, returning to “home” each time… the first with a navigation error of just 9 cm; the second with about 0.5 m accumulated drift following more than an hour of operation away from base.

On each of these missions DEPTHX continued to collect a fire hose stream of geometric data, bit by bit filling in the unknown voids in La Pilita. Using these data a 3D “evidence grid”—a probabilistic density map showing “voxels” (cubes) of space likely to represent the internal boundary surface of the newly explored terrain—was constructed. One of the interesting features of this approach is that “negative probability” is deposited in the grid in places where the sonars detect nothing to exist. This negative probability accumulates over time to suggest that there really is nothing there, a consensus of many different sonar transducers seeing the same area over time. And thus, one can make a reasonably safe assumption that in such areas it is OK to drive the bot. Coincidentally, the converse is also true: that the places where true boundary surfaces exist will become better defined over time and have a higher probability rating that they are real. These, in turn, form the basis for the creation of a map, from which the vehicle location can be deduced in 3D. This, in a nutshell, is SLAM—Simultaneous Localization and Mapping. The green figure above shows the 3D evidence grid for La Pilita as it is being developed mission-by-mission. It is specifically a slice from -40 m through -60 m in depth. One can clearly see in this image that the core of the cenote is black, meaning high negative probability of occupancy of something real—and it is within that zone that it is safe to navigate. With some luck we will conduct the first full 3D SLAM navigation by Saturday. The expedition packs up on Sunday, February 11.