The advance DEPTHX team arrived at Rancho La Azufrosa last night after an eventful set of days crossing the border. It is difficult to explain all of the details from our plight, but let me just say that it deserves a write-up of some sort. 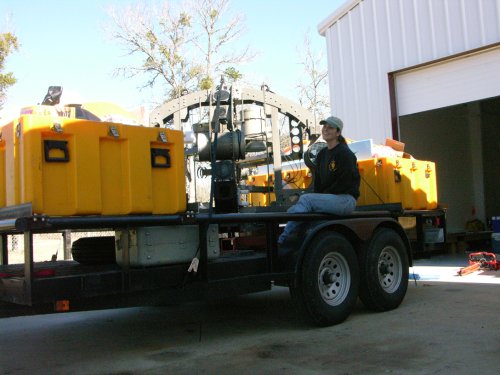 We left Stone Aerospace in Del Valle, Texas Thursday afternoon, arriving at our hotel in Harlingen after midnight. Awaking the next morning, we crossed the Rio Bravo at the Los Indios crossing, one that I always try to cross since it is out of any urban area. The customs agents were very nice there, but since it is a satellite office, they said we needed to cross in Matamoros. We stayed at Los Indios for about 5 hours calling back and forth to the U.S. Embassy in Mexico City, trying to convince the Mexican officials to let us pass (we even set up our mobile satellite internet at the customs area!), but finally about 12:30 it was determined that we must turn around and go to Matamoros. One hitch…..we had to now go back through U.S customs towing a trailer with a submersible robot on it! 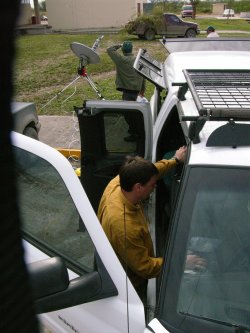 We spent 2.5 hours going through the commercial import line (with all the big trucks), and were lined up for a full-vehicle x-ray scan. After some convincing that this could fry all the electronics and ruin the project, the U.S. customs agents agreed to just manually scan to see if we had any radioactive material. Since we didn’t, they let us pass back into the U.S. Back where we started from in the morning, we regrouped in the parking lot of the hotel, printing out equipment invoices emailed from the U.S. Embassy, drafting a manifest list, and re-wrapping the bot frame in a tarp. By 4:00 PM we were on the road to Brownsville, destination Matamoros.

While approaching the bridge, we were met by a swarm of U.S. customs and "ICE" (I think it stands for International Commerce Enforcement) agents. Apparently, there are export restrictions on some stuff, and they were quite confused as to how to handle our interesting caravan. After sitting parked, poised to cross into Mexico, our "friendly" U.S. customs agents (in the sake of National Security, I’m sure) decided it was necessary to "detain the commodity" until they could run this up the chain of infinite bureaucracy. This meant it was locked up in holding yard Friday night. We had no idea how long this would take, and holed up in a nearby Best Western pondering our fate.

Saturday morning….Our options limited, I began to receive phone calls from the customs agent working our case. I have to say this guy was great. He went the extra mile to get us going again. After contacting our science liaison at the U.S. Embassy in Mexico City, he decided that it would be OK to let us go with "the commodity" and continue onto Mexico. We hooked back onto the trailer and crossed the Rio Bravo for the second time around noon on Saturday. I never felt so relieved to be in the hands of Mexican bureaucracy instead of the U.S.

Crossing through Mexican customs was very straight forward. A couple of hours getting forms filled out and documents stamped and we were heading south through the streets of Matamoros by 3:00 PM. The rest of the drive was quite uneventful, except for the fact that I was pulling a 8-foot wide trailer on roads that were 8 feet, 2 inches in each lane with radical drop-offs on the shoulders. I can attest to the "white-nuckle syndrome."

We finally arrived at Azufrosa around 8:30, and began the ominous task of unpacking. The internet seems to be working well, although not at light speed. It’s better than nothing at all. I’m sitting in the palapa drinking coffee writing this email, it’s pretty cool.