Marcus and Robin Gary left for Austin today – Robin returning to her job at USGS and Marcus to fetch an additional load of supplies for basecamp. This left us with a skeleton crew of John Kerr and myself to work the finer issues of setting up the field lab and re-assembling the bot until further reinforcements arrive.

First order of business was to uncrate the bot. At 1.5 metric tons DEPTHX is an industrial strength machine (rated to 1,000 m ocean depth), but this also means it’s not something you toss about by hand. Alejandro Davila, the owner of Rancho la Azufrosa, kindly made arrangements with a local Tampico-based crane company to ship a mobile handler to the site. We then began unloading all the electronics modules into the field lab for individual checkout. 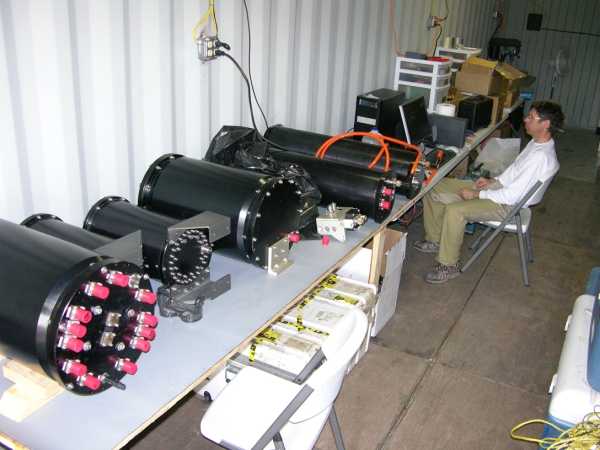 Above: about half of the pressure vessels that go inside DEPTHX, at the field lab.

Although it seems like a simple process, DEPTHX has over 500 electrical connections, all of which run through scores of dis-connectable pressure rated cables… and each of those, along with the housing closures, have hundreds of orings, which are lubricated and therefore attract dust… of which there is plenty at Rancho la Azufrosa. So every make-and-break of a cable connection or housing lid means replacing orings, re-lubing, and sealing before any contamination can enter.

Today we managed to load the variable buoyancy engine (VBE) ballast as well as the two pressure housings for the redundant lithium-ion power supplies into the bot frame. We also charged up the VBE pressure drive tanks (5,000 psi carbon-epoxy construction) and mounted those.

The weather has been cooperative, partially sunny, a bit windy, and 70F. The only point of serious concern today was that while totally focused on our work we began hearing strange “clacking” noises outside the lab trailer and emerged to find a large herd of goats inspecting the bot at close range… in fact they had it surrounded and were licking the sonar transducers. Fortuitously we caught them before they got the idea to chew on the cables. New line item on the pre-flight checklist: remove goats from bot vicinity.