Not everything goes according to plan. After unpacking most of the hardware into the field lab the previous day the first order of business was to top off the charge on the twin litihium-ion power stacks used to run DEPTHX, since all subsequent electronics check-outs are based on being on system power. 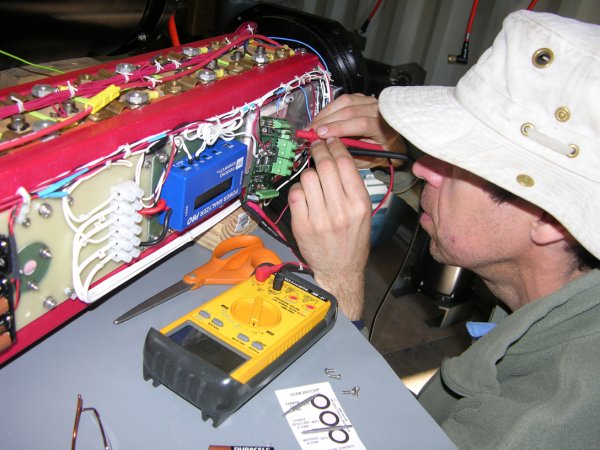 Unbeknownst to us (possibly from vibration on the trip down) a loose wire on the charging cable crossed circuits and sent full stack voltage (48 volts) down a line normally used for digital communications to control a number of electronics boards on the battery. Before we caught the problem it had fried all three (two primary and one backup) of the E-Stop (emergency stop) power disconnect boards on site here at Zacaton. For human safety reasons DEPTHX has the equivalent of a “big red STOP” button on the top of the vehicle. But because the full power draw from the vehicle can be large (scores of amps) that E-stop switch is not like your normal house light switch—it’s a digital switch that in turn “talks” to a very high power relay board in each battery which in turn enables high amp flow from the batteries. And it was the communications line (and all the microchips) to that “Disconnect” board that got fried. It took all of today to sort out the source of the problem that caused the loss of the boards and to permanently preclude the incident from re-occurring. But that still left us with a dead bot until the E-stop could be renabled. No solution had been found as of midnight and the team retired with the unpleasant knowledge that we had just 4 days in the jungle to sort this out before the arrival of the main research team. 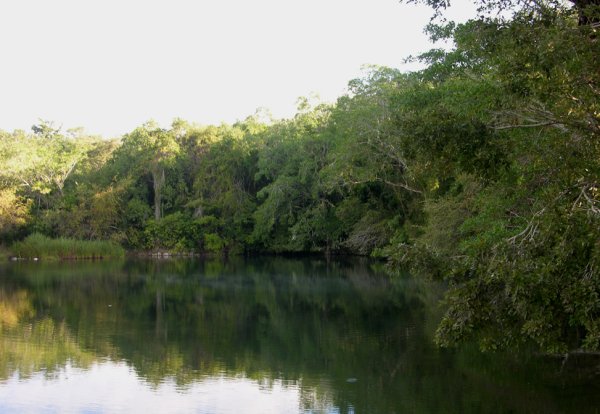 Above: source of “El Nacimiento” (the spring) lies just 100 m west of the main field lab at Zacaton. The horizontal black slot at center is the entrance to the Pasaje de la Tortuga Muerta (dead turtle passage) leading upstream and underground to the main Zacaton cenote. It was first explored in 1989 by Jim Bowden and Gary Walton and leads 220 m underground to where it re-emerges on the southwest corner of Zacaton.