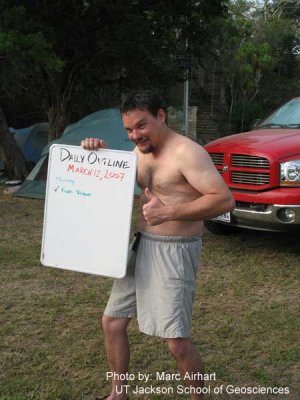 Marcus Gary gives the "thumbs up" after locating the bot Monday morning. After failing to resurface from a 4-hour mission the night before, the team was extremely relieved to see DEPTHX bob to the surface after Gary freed it from the rock it was stuck on.

Marcus was up before dawn. He geared up at La Pilita as the sun came up. Honestly, finding a robot (albeit a bright orange robot) that could be anywhere in La Pilita seemed like a futile task. But, being a game soul, he descended to 75 feet and began a slow dive following the walls of the sinkhole. The water was crystal clear. Beautiful biomat-covered lobes stood out under his HID dive light, which cut through the water like a laser beam. As he was swimming, he contemplated what divers would be recruited for a deep recovery mission. First choice, Jim Bowden, is currently in Italy diving at the deepest underwater cave in the world—the Merro Well. Approximately 15 minutes into the dive, one particular lobe caught his attention. He ascended a few feet and his light illuminated the word “DEPTHX”. Miraculously, he had swum right up to the robot.

All battery power had been spent, so the robot’s lights were dark. All systems had shut down. It was lodged under an overhang, a scant 6 feet from a clear shot to the surface. Being only slightly positively buoyant, Marcus was able to force the robot down a few feet and out from under the overhang where it was free to make a slow, unaided ascent to the surface. Surface team members were not expecting Marcus to find the robot so quickly. Third glance at La Pilita, no robot. A few minutes later, ROBOT! By 9:30am John Kerr had the robot out of the water and on charge. The batteries had shut off at 46 volts, so it would be at least 6 hours before the robot was ready for its next mission. This gave the team plenty of time to determine what caused the robot to get lost.

The CMU navigation team downloaded the data the robot gathered during its “star mission”. It had performed the ascents, descents, and traverses perfectly. The navigation fault occurred after the robot finished the “star” sequence at 60 feet, as it attempted to ascend to the surface in the middle of the sinkhole. Nathaniel analyzed the sonar firing patterns as the robot drifted off-course. After analyzing and re-analyzing the data, Nathaniel and George hypothesized that since data from several of the sonar transducers had been filtered out, this caused the robot to be pulled towards the wall. David and Dom joined the discussion. Dom confirmed, apparently as the robot drifted off-course, it was only being guided by one sonar transducer. That was a glaring error and a (relatively) easy fix. 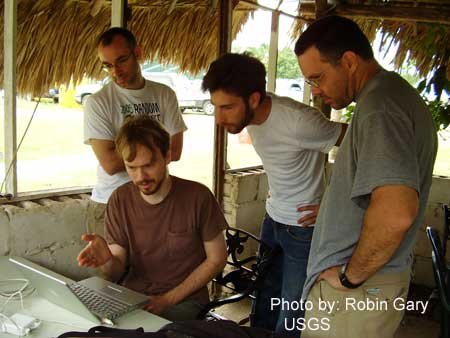 Nathaniel Fairfield explains to the rest of the CMU team what happened on the previous night’s stressful mission. The bot made it almost out, but had a small glitch causing it to get wedged under a rock ledge 18 meters below the surface. The glitch has now been fixed.