Our first full day back at Rancho la Azufrosa was a busy one. John, Robin, and Marcus had a long list of things to get done before the rest of the team showed up tonight. First on the list was to check the status of the bot and our shop. A strong windstorm, known locally as "El Norte" had blown through the previous weekend, leaving our shade canopy over the shop (a modified 40 foot shipping container) ripped to shreds. Not a major catastrophe, but a rather hot development. John Kerr emailed our geomicrobiologist, John Spear from the Colorado School of Mines to pick a replacement up in Denver and bring it on the plane. We will have shade again! Nonetheless, we opened up the shop and John checked the batteries. One of the battery banks had dropped to an uncomfortably low voltage over the past three weeks, but after an hour or so of pumping electrons into it, John breathed a sigh of relief as it became clear that it would work. On to the next item on the list. 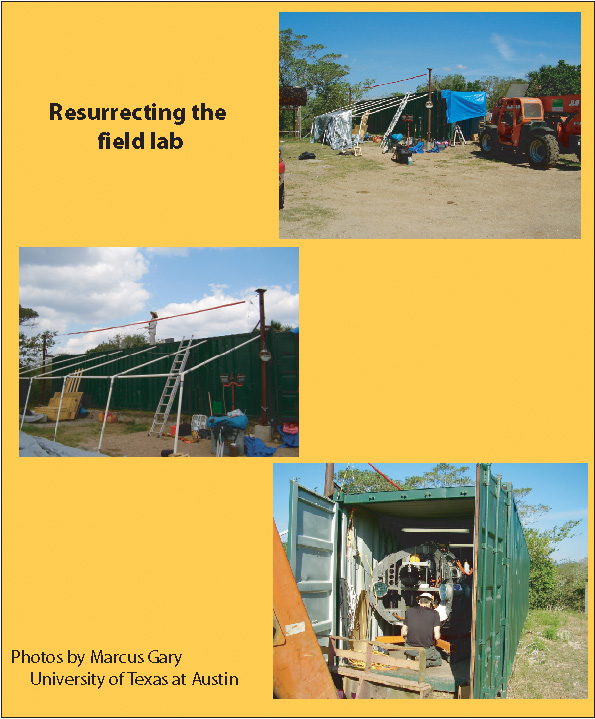 The three photos above: A windstorm or "El Norte" had shredded our shade canopy (top), so we had to evaluate what to do next. Temperatures began to rise in the field lab….approaching 100 degrees (F)….Robin climbs on top to hose down the lab for some evaporative cooling (middle)….success! Temperatures dropped to a pleasant 81 degrees within 20 minutes (bottom).

Turning on the bot 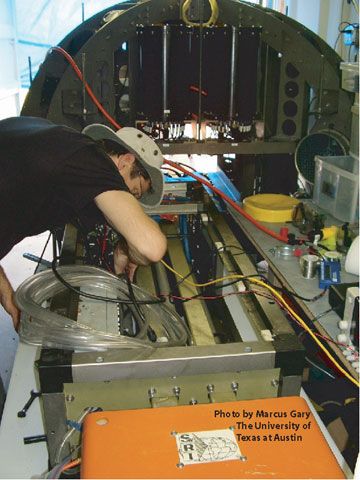 John now booted up the system successfully, and we checked out the status of the science payload. Operation of this component is a primary focus for this week’s tests, so a list was made for what needs to be repaired and/or modified. At the moment, all we needed to do was reinstall the payload into the bot.

Left: John Kerr makes some adjustments on the science payload of DEPTHX before reinstalling the hardware on the bot.

Robin and Marcus Gary now headed over to La Pilita to set up the DEPTHX mission control. This entails tying in to the electricity grid and installing a breaker panel to provide power, setting up 4 large tents, and getting all the other odds and ends set up. Marcus handled the electricity. It is always an adventure when dealing with Mexican high voltage….440 V-three phase….had to be careful. Robin went ahead with the tent set up. First was the bot battery charging tent, then the science/biology tent, then the navigations ops tent. Finally we set up a fourth tent that will serve as the geology tent. Everything looks good, so we headed back to the ranch field lab to see what John had been up to. 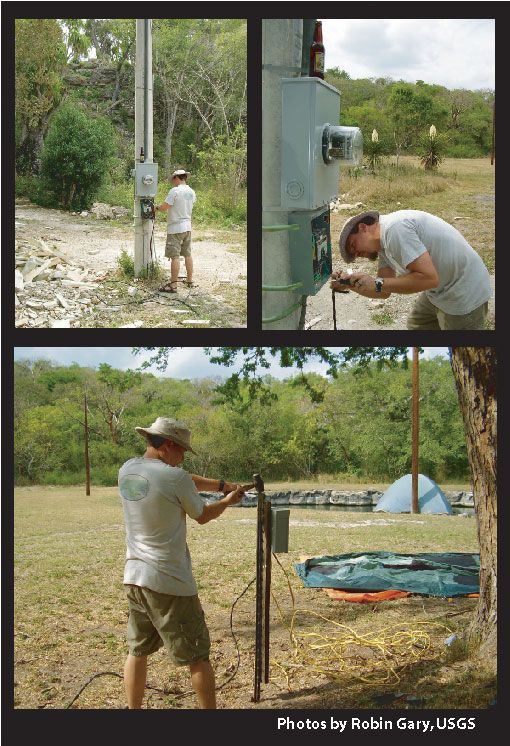 Marcus Gary ties into the electricity grid to supply power for La Pilita Mission Control. The bot battery charging tent can be seen set up near the water.

Upon return to the field lab, we found John had already installed the science payload, closed up the batteries, removed the bot from the container using the telescoping forklift, and had employed the help of local ranch hands Nacho and Gilberto to assist with bolting on the syntactic foam. Wow, things must be going well! Marcus jumped out and took over operation of the forklift so John could help guide the foam onto the bot frame. After another 30 minutes, it was ready to head to La Pilita. John and Robin continued to pack up computers, tables, cables, battery chargers, etc. to set up at La Pilita and Marcus headed over with the bot hanging from the forklift. 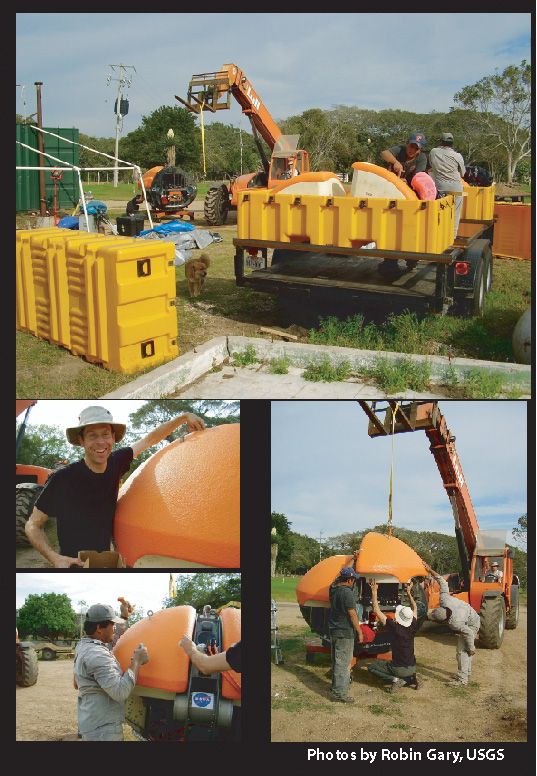 John, Nacho, Gilberto, and Marcus bolt on the syntactic foam to the bot. This was the final step at the field lab in preparing DEPTHX for operations at La Pilita.

Final Set Up and Arrival of Other Team Members

By 6:00 P.M. we have the bot poised for deployment into La Pilita, all support tents set up and operational. It was a busy day, but we were now prepared for the rest of the team to arrive and hit the ground running on Friday morning. Always a good feeling when things go well and you reach your goals. By 7:30 the three of us headed back to the ranch house to begin cooking dinner and preparing the rooms for other team members. Around 10:45 three sets of headlights rose up from the ridge and everyone made it to Rancho la Azufrosa safely. Antonio Fregoso led the caravan from the airport in Tampico, picking up: 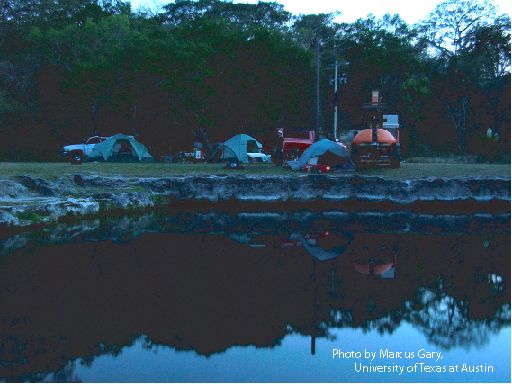 The sun sets on La Pilita Mission Control with the DEPTHX bot ready for the next day’s round of tests.