John Kerr and Marcus Gary arrived on site at Rancho la Azufrosa on Friday evening May 11th to begin unpacking DEPTHX from the storage container where it had baked for the past two months. John reported a positive system boot today that indicated the system was still stable. Bill Stone left Austin, Texas mid-day with a truck load of late-arriving components that would be needed for the new high power underwater lighting system that would be used for the science autonomy experiments that will dominate this series of tests. Jose Antonio Soriano, one of Mexico’s best known expeditionary explorers and a commercial nature photographer, began documenting the final field stage of the DEPTHX project. Mexican biologist and DEPTHX collaborator Antonio Fregoso, from the Universidad del Noreste in Tampico, also arrived on site. Over the weekend the floating science station in Cenote Zacaton was upgraded by Marcus and Antonio while John worked on wiring for the power supply for the new film lights. Stone also brought two MK6 closed cycle life support backpacks and associated heliox and oxygen gas supplies for a hedge against possible need for emergency recovery of DEPTHX should there be a problem. The MK6 is limited to 200m operating depth so any autonomous system failure in DEPTHX below that depth would be unrecoverable.

View of Cenote Zacaton looking northeast. The round, green floating reed mats at the top of the image are known as “zacate”, hence giving rise to the name “Zacaton” for the cenote. Normally these rotate and move about with changing winds; however, in this case they were corralled into the northeast corner with floating line in order to keep them from interfering with the science missions. The pit measures 120 m in diameter and the drop to the water is 17 m freefall. Photo: (Jose Antonio Soriano / Stone Aerospace) 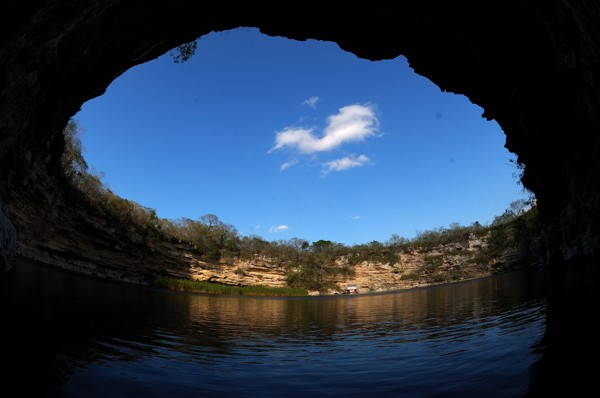 The view from the bottom –  a fish eye portrait of Cenote Zacaton taken from a kayak at the northwest corner of the shaft. It was at this location that cave divers Sheck Exley and Jim Bowden made their attempt to reach the bottom of Zacaton in 1994. Bowden reached a depth of 282 m. Exley never returned and the mystery of what lay below remained until the arrival of Team DEPTHX in May 2005 during which the shaft was imaged to about the same depth (282m) using DEPTHX core instrumentation in a drop sonde configuration. The current autonomous missions hope to finally resolve the mystery of what lays below. Photo: (Jose Antonio Soriano / Stone Aerospace).

John Kerr working on the guts of the Science Payload to integrate a new PAR photo sensor that will measure incident ambient light levels at locations where DEPTH will begin taking biological samples from the wall of Cenote Zacaton. Photo: (Jose Antonio Soriano / Stone Aerospace). 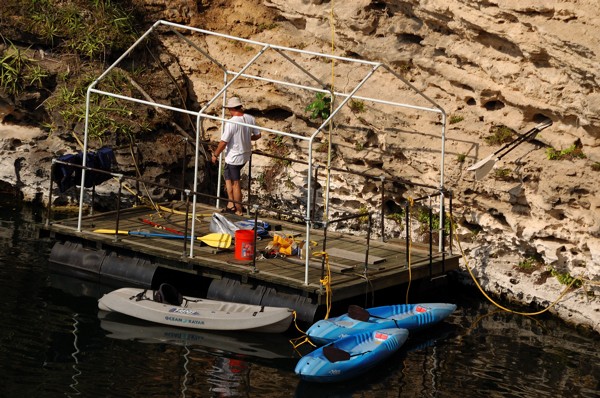