Today we re-ran the May 15th mission, this time with what apparently was a solid guidance system alignment. Because of the disparate behavior of the IRU (with the previous day’s behavior) we kept the data tether on the bot in order to observe any anomalous behavior. The descent to -270 m went without error and the bot was performing with nominal parameters. Once we were relatively certain the system was stable we uplinked instructions for DEPTHX to proceed deeper into the northwest corner. The result of this timid exploration was the ability to see (with the sonar arrays) down to a new underwater depth of -319 meters. The main entrance shaft – with a well defined bottom now beginning at -276 m on the southeast corner and sloping down to the northwest to -319 meters – appears to focus into a deep alcove at the northwest corner. Tantalizingly, there remains a zone below this point (see today’s map) that was not able to be imaged because we did not drive far enough under the enormous overhanging roof for safety reasons. Although we have closed-cycle helium diving equipment on site the maximum safe depth for bot rescue with that equipment is 200m. So any errors below the northwest roof would result in a permanent loss of the bot. The unknown northwest void could be a closed alcove or it could be the entrance to a 16 m high by approximately 40 to 50 m wide horizontal tunnel. Beyond that we cannot speculate without further exploration, and that cannot take place until a positive explanation is reached for the IRU crash of May 15. We are pursuing a resolution to this while continuing to conduct fiber data tether science missions. It is important to point out that the source for the large river that appears at El Nacimiento to the west of Zacaton comes from whatever lies down in that alcove. Whether that souce is navigable to DEPTHX will have to be determined by untethered exploration. It should be noted that in addition to the 319 m of confirmed underwater depth, the shaft continues 16.5 m above the water in air (see the cenote photos for the May 13 blog), thus giving a total known entrance shaft depth of 335 m. 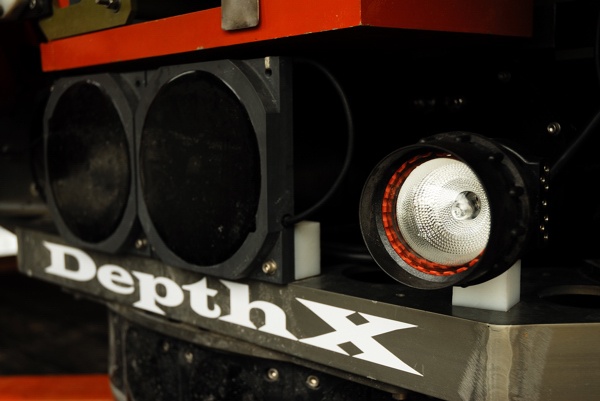 New 1,000 m rated underwater high power lighting (two 100 W diffuse illuminators) formed a new addition to DEPTHX and were given a ride with the vehicle today in preparation for the first science mission on May 17. Photo: (Jose Antonio Soriano / Stone Aerospace) 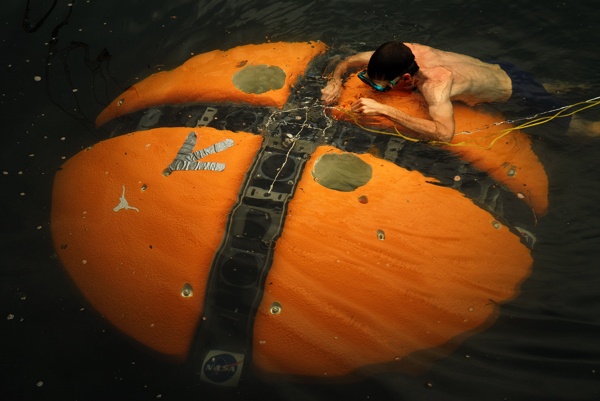 John Kerr attaches the fiber optic data link to the bot in preparation for the second mission to the bottom of the entrance shaft. Photo: (Jose Antonio Soriano / Stone Aerospace). 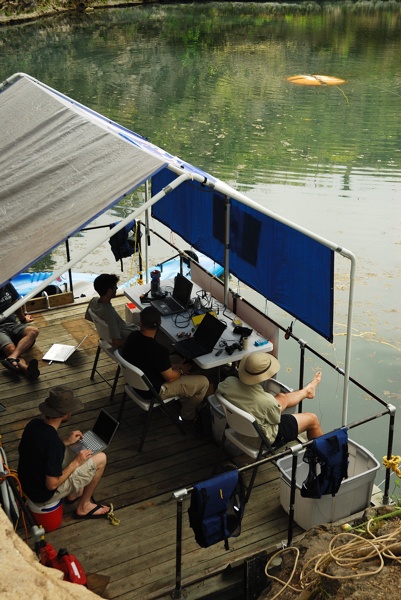 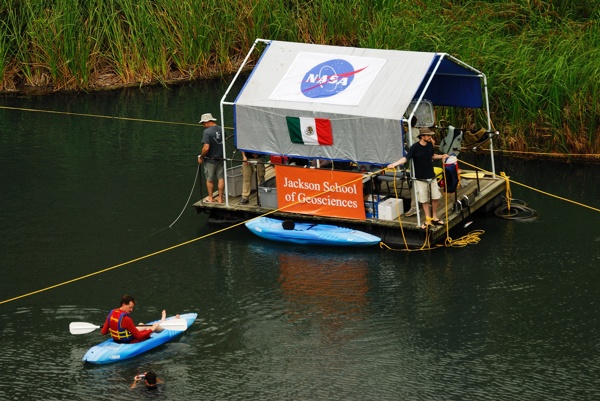 The floating science platform is maneuvered out to the center of the cenote while the bot descent is underway. Photo: (Jose Antonio Soriano / Stone Aerospace). 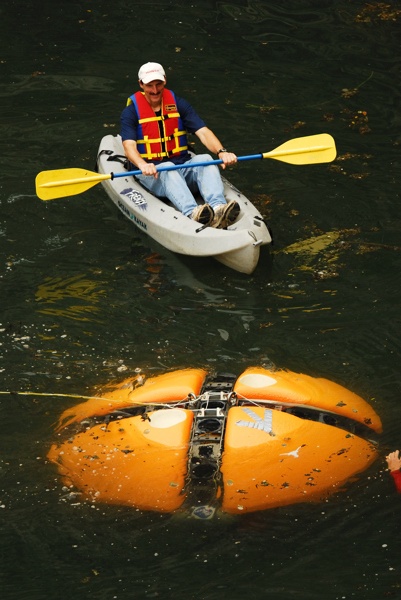 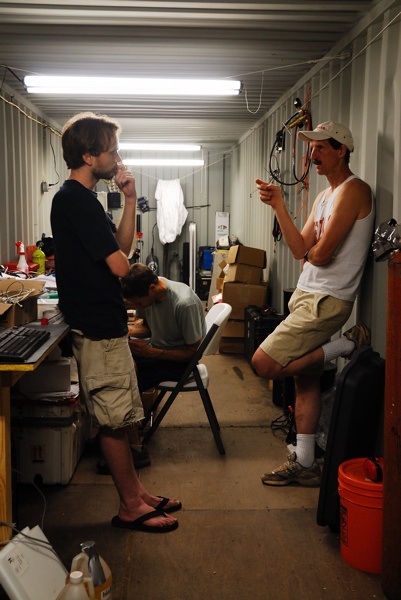 Following the May 16th mission Nathaniel Fairfield (left) and Bill Stone discuss DEPTHX navigation control issues at the field lab while John Kerr (in background) wires up the first test circuit for interfacing the PAR (photosynthetically active radiation) sensor that will be used as the trigger for some upcoming science autonomy missions. Essentially it is a light intensity detector that is tuned to the wavelength of chlorophyll. Photo: (Jose Antonio Soriano / Stone Aerospace). 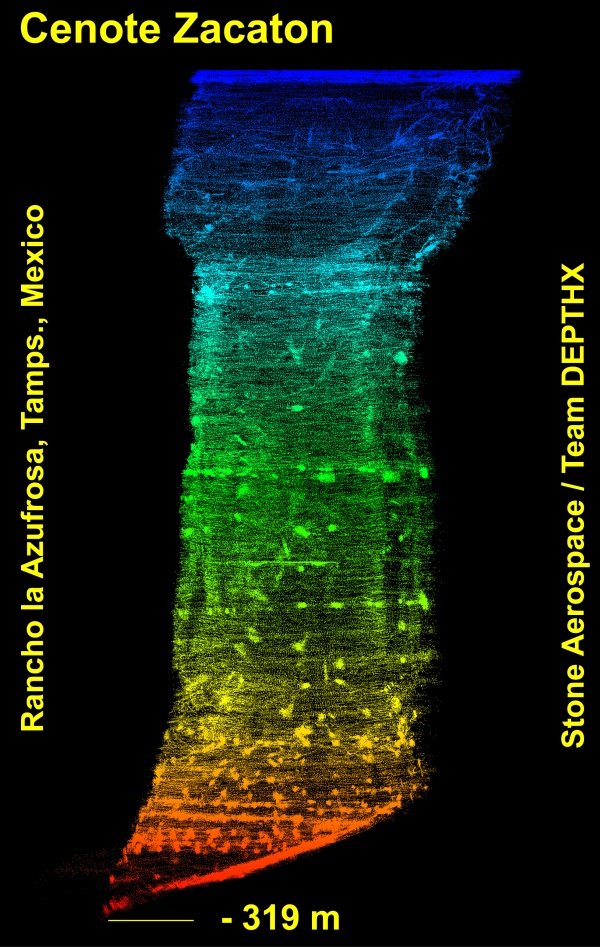 This map illustrates the May 16, 2007 data set for Zacaton. With a stable IRU the descent, exploration, and ascent portions of the data were automatically co-registered. This conclusively confirms the presence of a sloping bottom to the entrance shaft of Zacaton and also confirms the presence of an unexplored void to the northwest, the extent of which remains unknown. Photo: (Stone Aerospace / Team DEPTHX). 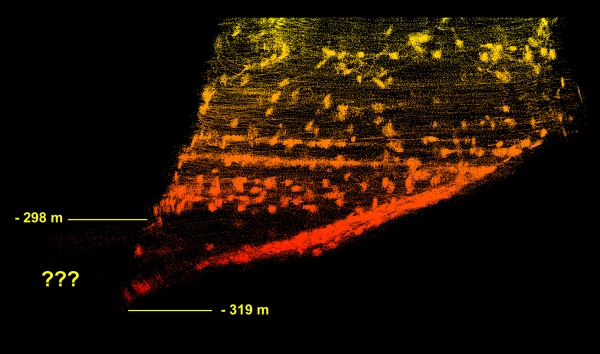 Refined closeup of the mysterious northwest corner at the base of the Zacaton entrance shaft. As the data indicate, there is a potential there for a passage approximately 16 to 20 m in height by 40 to 50 m wide. Or it may be a blind alcove…. Only further exploration will tell, but this seems to be the logical source of the hydrothermal spring. Photo: (Stone Aerospace / Team DEPTHX).