We were back to work as usual this morning. We planned a mission in the southwest end of the lake, around the same area we navigated to on our first long run. Launch went smoothly; we are really getting the hang of our routine here now. Bill and Vickie tracked the bot on the surface and the folks in mission control watched as the bot navigated from point to point. A little over halfway through the mission, though, mission control radioed a message to the tracking team, “We seem to have the fiber snagged on something. We’re going to stop here and dive a little, see if we can get the fiber free.”

In order to get as many points covered as possible per mission, the missions are planned to be long narrow loops, usually working up one row of grid points and down the next row. Somewhere in this loop, we had wrapped the fiber around something sticking out of the ice ceiling. Now, even though the bot was heading closer to home, the fiber in the bot house was still spooling out, instead of going slack to be pulled back in.

After the dive, mission control let the bot continue its planned route and hit one or two more grid points. When the fiber continued to feed out, even as the bot approached closer and closer to home, we decided to cut a few points off of the end of the mission and head straight home. Since we have a 1000 m long string of fiber, we had enough line to bring the bot home, even with the fiber wrapped on some mystery obstacle several hundreds of meters away.

With the bot safely home and the fiber optic still wrapped around something out in the lake, the debate began about how to proceed. Some people wanted to recharge the bot’s batteries and go back down and, using the upward and horizontal cameras, follow the fiber back to find whatever it was caught on. Others wanted to detach the fiber from the bot and just pull it through by hand. By pulling on both ends of the line—the outgoing and the incoming—we could feel that the line was wrapped around something smooth because there was not much resistance to tugging in either direction. In the end we decided that while finding and identifying the snag object would be useful for future missions, it was too risky to take the bot back out to investigate while the line was tangled—it might just make the problem worse. Instead, we decided to pull it through. We taped a small piece of foam to the metal connector on the end of the fiber so that it, like the rest of the fiber, would float on the ice ceiling. We tossed the connector into the water and began to pull on the other end of the line. Everyone watched with anticipation as Bill pulled the line and fed it onto the deck as it came up. We all wondered if the connector would get stuck in the snag point, should we have cut the connector off? After a few minutes of pulling line in, Bill reported that there was suddenly much less resistance in the line, the connector must have made it around the snag. It was several minutes more before the end of the line made it back to the bot house. What a relief to get out of that mess. Although we still don’t know what we got caught on—an old experiment or an imperfection in the ice surface—we had the foresight to mark the cable before pulling it through, so now we know how far away the snag was, and in what approximate direction. Even though we had to cut the mission short, we still got seven data points today. 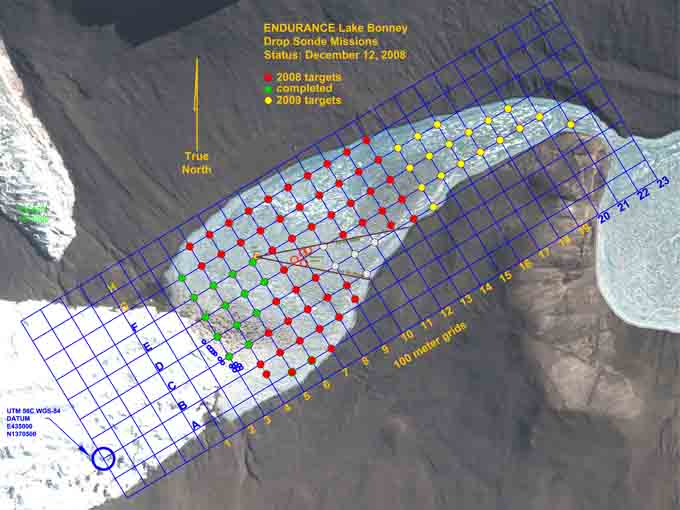 Our status at the end of Mission 2.