Now that we have our act together on these profiler missions, it is time to do the riskier missions. In our previous missions we have picked off almost all of the nearby, easy grid points and now we have to go further out. The mission plan for today was a 1620-meter long loop, with 11 grid points. It’s the farthest distance we’ve planned to traverse, by over 100 meters. According to Bart’s mission planning worksheet, it cuts into our reserve battery power. We decided that if we are very efficient with our launch procedure, we should have enough battery power to run the mission safely. The second concern is the sheer straight-line distance from the Bot House to the furthest point on the plan, 704 meters. If the fiber gets caught that far out, we don’t have enough fiber to drive it all the way back still connected. Everything needed to go right today.

We got off to a good start, getting the bot into the water quickly. The buoyancy, which mysteriously changes a little bit from day to day, was adjusted and looked good. Just before diving the bot down to the bottom of the melt hole, we noticed a small white object in the vertical thruster mesh. Since we didn’t want this foreign object to interfere with the thruster, Maciej got into a harness and leaned out over the bot to pick the object out of the mesh – it was a small chunk of syntactic that must have broken off. We took the bot down under the ice, went through the rest of our launch checklist and the bot started off to the first point for the day. When it got there, the ice-picking maneuver, where the thrusters turn off and the bot floats up to rest against the ice ceiling, didn’t work. With the thrusters off the bot was slowly sinking instead of rising. Somehow, the buoyancy was off. Given our tight battery budget for the mission we could not afford to keep the thrusters on to hold the bot against the ceiling, nor could we dally, find some other solution and then continue on the mission. The only choice was to go straight back home, take some lead off the bot and then recharge the batteries to full capacity and start the mission over. 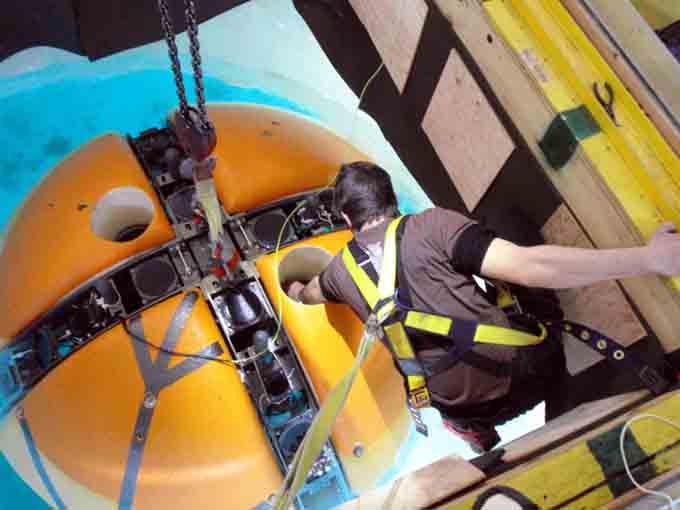 Just before launch, Maciej leans out over the bot to remove a small chunk of syntactic that has broken off and become stuck in the mesh above one of the vertical thrusters.

The bot’s buoyancy in Lake Bonney has consistently been a bit of a pain. One would think that if we could get the buoyancy just right one day then, with no changes to the ballast or the bot, the buoyancy should be the same the next day, but that has not been the case. There are probably several factors in play here: the bot’s temperature when it goes into the water, the water temperature and density in different parts of the lake, microbubbles and so on. For this reason, we’ve been in the habit of checking the ice-picking maneuver right at the beginning of every mission, just beyond the melt hole. Today the ice-picking worked during the launch check but wasn’t working at the grid point. We couldn’t establish a cause for this problem so we decided to just deal with the situation by removing two pounds of lead.

With the batteries back on charge after our aborted launch,Bill works on adjusting the bot’s buoyancy for round two of today’s mission.

After we had charged the batteries for a few hours we were back to full charge and ready for Take Two of our mission. This time we were able to launch the vehicle in even less time and in a flash we were cruising back out to the first grid point on our mission plan.

This time the bot ice-picked normally, we did the sonde drop and were off to the next point. By this time in our field season here, all of our repetitive tasks have become second nature. Chris, Shilpa and Kristof are able to do sonde drops more efficiently now and Bill and Vickie have no trouble keeping up while tracking the bot and flagging the sonde drop points. 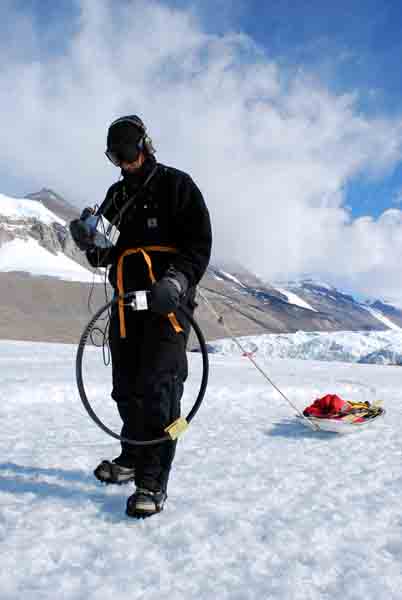 Bill tracks the bot’s radio beacon with a loop antenna while pulling a sledwith the flags and kovacs drill needed to mark the sonde drop points. 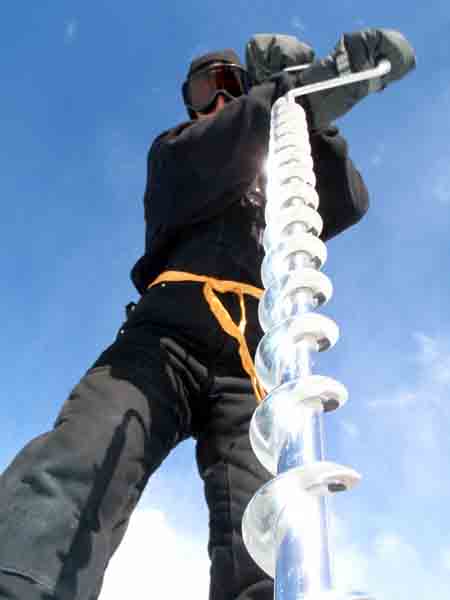 Bill drills a hole in the ice for the bamboo pole that will flag this sonde drop point.

On the return leg of the loop there was a moment of concern when the fiber appeared to be caught, but a short dive with the bot cleared up this problem. When the bot returned to the Bot House, we still had several amp-hours of battery life left, more than we expected. What’s more, today the bot went as far away from the melt hole as it will go in Lake Bonney and it returned home successfully. 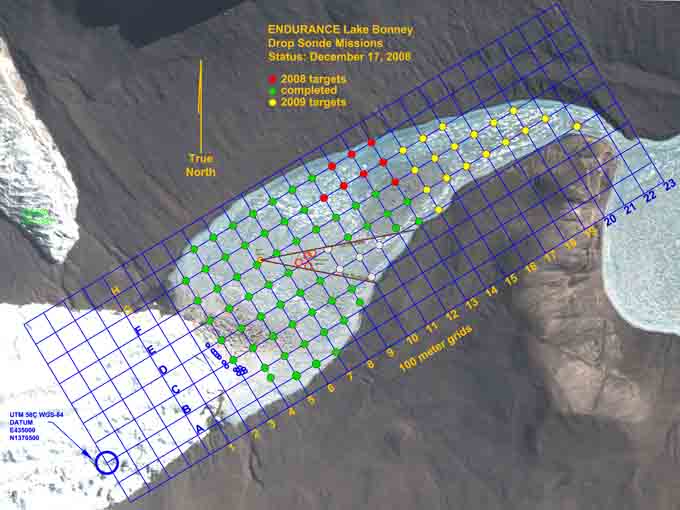 Our status at the end of Mission 6. The grid is almost done.