While yesterday’s mission was pretty long and took us far from home, the plan for Mission 7 was even more aggressive today—1730 meters long, and again about 700 meters straight-line distance from the Bot House. Also we would be operating close to shore again. The north shore of the lake is a steep talus slope that tops out in a large cliff face about 600 meters vertical distance above the lake. This slope is littered with huge boulders and it seemed quite likely that the slope under the ice would have some big rocks, too—hazards for the bot. So, just like the start of every mission, we had some reasons to be a little nervous. 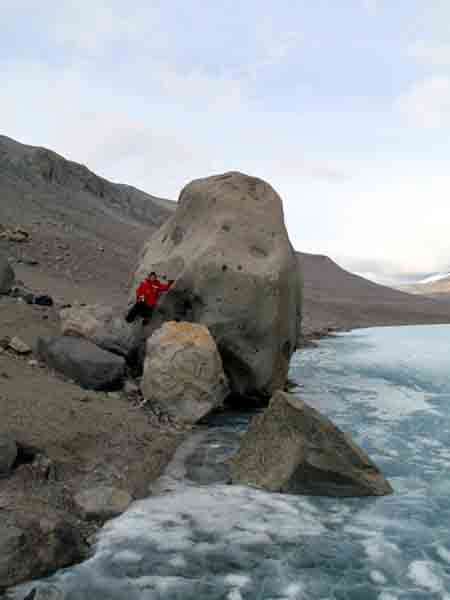 Vickie poses next to Potato Rock on the north shore of West Lobe Lake Bonney.It is rocks like this that had us worried about bringing the bot close to shore in this area of the lake.

We topped the batteries off, dropped the bot in the water and started off. Vickie and Bill tracked the bot as it traveled between sonde points. The phono plug on one of the beacon receiver headsets broke about halfway through the mission and since time is of the essence with these longer missions, Kristof hopped on the ATV and raced out to the tracking team to give them a replacement headset so that there would be no delay in locating the bot.

As the bot approached the north shore in the second half of the mission, mission control kept a close watch on the water depth and the obstacle avoidance sonars. As predicted, we encountered a large rock on the bottom that was big enough to halt our progress to shore. We did the sonde drop from the safe point we stopped at and then proceeded parallel to the shoreline, approaching more closely once we passed the rock. 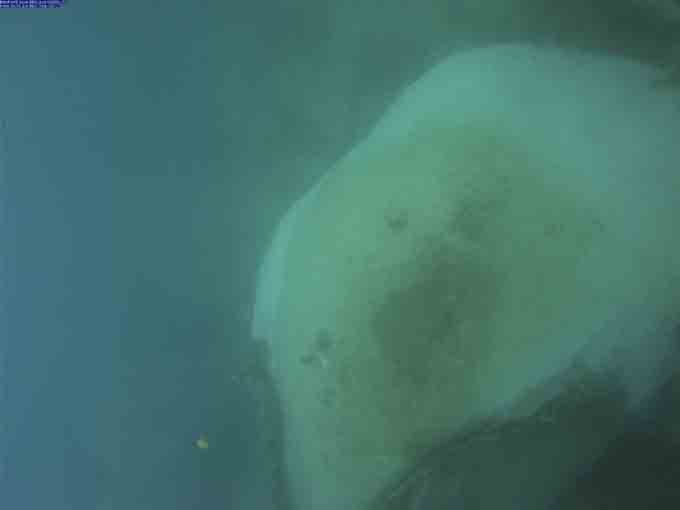 The sonde camera took this image of a large rock near the north shore. It was about two meters tall.We avoided this obstacle and happily didn’t find any others.

In no time the bot had run through the remaining sonde points without further incident. On the 350-meter journey back to the Bot House, we ran the bot on a course parallel to and 30 meters offset from the path it took out in the morning. This provides us with a patch test for the multibeam sonar, basically calibration data we can use when we post-process the sonar data.

The bot made it home safe and sound. With the exception of a couple of sonde points we might grab later when we are running missions to the glacier face, we are done with all of our 2008 sonde point targets; we have succeeded with a large part of our job here this year and our spirits are high today. Tomorrow we start on another objective: mapping the glacier face. 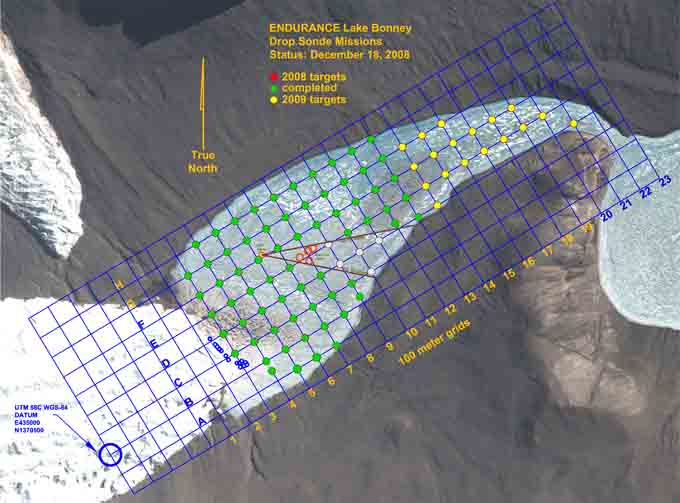 Our status at the end of Mission 7. We have hit all of our sonde targets for this year!