Today we shifted gears from running sonde drops at grid points to mapping the face of the Taylor Glacier. The glacier ends at the head of West Lobe Bonney and the face of it extends down below the surface of the lake. Peter is interested in getting a 3D sonar map and, if possible, photos of the underwater glacier face.

We spent the morning re-arranging some of the sensors on the vehicle. During the profiler missions we had our multibeam “DeltaT” sonar facing downwards to map the lake floor as we went from point to point. For the glacier missions, we want the DeltaT to face the vertical glacier wall, so we mounted it sideways on the front of the vehicle. We also moved the horizontal camera and HID lights to face the same direction as the DeltaT, also on the front of the bot; previously they faced out from the aft direction of the vehicle to help us avoid obstacles as we drove the sonde from point to point. 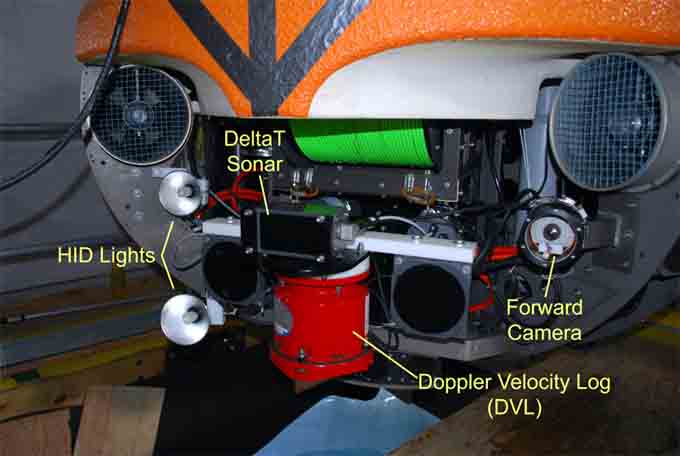 The HID lights, forward camera, and DeltaT sonar were all placed on the front of the vehiclefor the glacier-mapping missions.

We were worried that we would snag the fiber close to the glacier because the lake ice is somewhat broken up there and there are large icebergs sticking up out of the lake ice. Trying to avoid this, we drafted a mission plan where we would drive up to the glacier face, spin the vehicle slowly to get a sonar scan, and then retreat along the same line we approached on. Then we would move sideways 25 meters, approach, scan, and retreat again. The resulting mission plan looked like a dinner fork, where each tine was an approach and retreat. It was not an efficient use of battery power but we hoped it would keep the bot from looping the fiber optic line around any obstacles out there. The northernmost section of the glacier face looked the most straightforward and hazard-free, so we decided to start there.

We started to run the mission and as the bot approached the glacier, it became evident that somehow either the data on the mission plan map or in the bot’s navigation was incorrect. The coordinates that should have had the bot right against the glacier actually left the bot about 20 meters short of it. Bill and Vickie, who had been tracking the bot, hopped on the ATV to drive back to the Bot House and draft some extended coordinates. However, in the last few days, thanks to the warm weather we’ve been enjoying, the surface of the lake ice has morphed dramatically and the ATV got stuck in a water-filled ditch on the rough ice, leaving them soaked and walking back to the Bot House. Armed with an ice screw and some cargo straps, Maciej went out to retrieve the ATV as Vickie drafted new coordinates and Bill changed into dry clothes.

With the new coordinates the bot approached the glacier as originally intended and the sonar scans reported good data. Bill and Vickie continued to track the vehicle until Vickie suddenly broke through a layer of ice, getting wet to her knees, at which point they decided the ice near the glacier was too instable to follow the bot any further out. 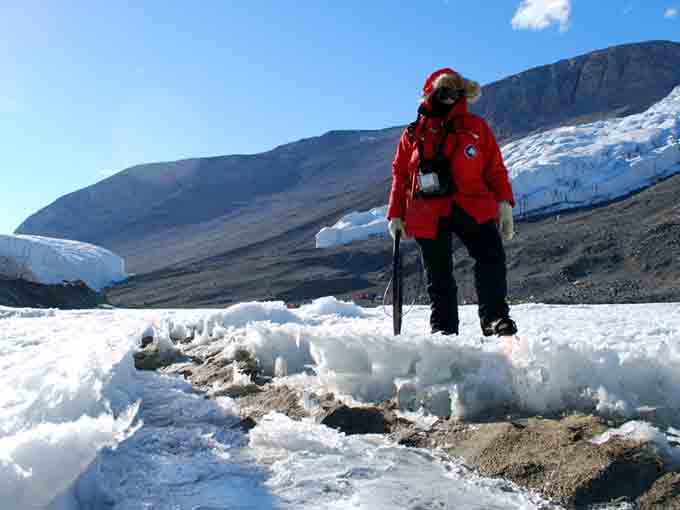 As the weather get warmer, the lake ice gets rougher and rougher. This makes tracking a slower process.

The folks at mission control were getting enticing images from the horizontal camera so they decided to approach the face a little closer to get more footage. When they did so, the bot unexpectedly bumped into an ice ledge, which knocked out the readings from the DVL (Doppler Velocity Log). The DVL is a key sensor in the bot’s navigation system so if it loses lock momentarily the bot becomes entirely disoriented, even after it regains lock. So now, with the bot in a place where we could not track it, the bot didn’t know where it was. Luckily, Chris was able to watch the sonar feedback and camera images and manually drive the bot away from the wall. The programmers estimated how much the bot might have drifted before the DVL regained lock and sent the bot an estimated location and told it to navigate back to the last point flagged by the tracking team. As it approached this flag, Bill and Vickie tracked the bot and reported the error, a few meters, in the bot’s calculation of where the flag was. Mission control reset the location using this groundtruth data and sent the bot home. 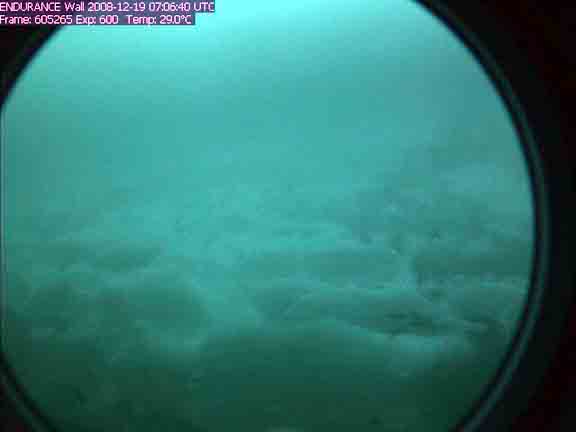 The forward camera took this image of the ice ledge the bot bumped into near the glacier.

To make matters even more interesting, by now the batteries were getting low and the bot was still several hundred meters from the melt hole. In addition, the visibility in the water had been decreasing all day and by this point in the mission, the water was quite murky. The warmer weather has been melting the glacier ice and there is now a waterfall blasting out a tremendous amount of water from the glacier face into the lake. Also, the flow in the Santa Fe stream next to our camp has increased. This influx of water is stirring the lake up and carrying in very fine-grained sediments. The result is that the crystal clear water we saw this morning is now a milky stew. The loss of visibility means that the visual homing program, where the bot follows a blinking light up the melt hole does not work because it is not be able to see the light. 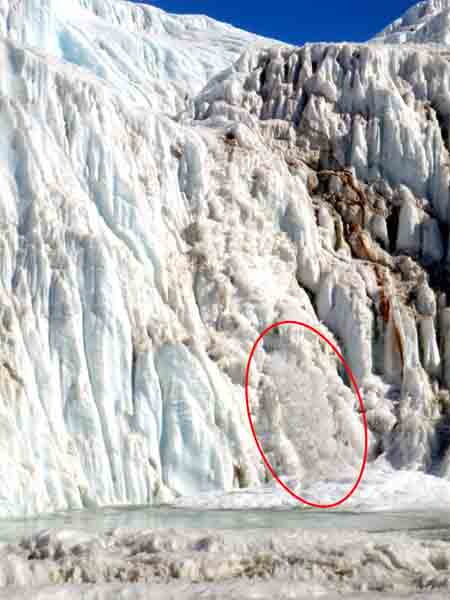 Water has started gushing out of a 3-meter wide hole in the glacier face. The waterfall is about 10 meters high. 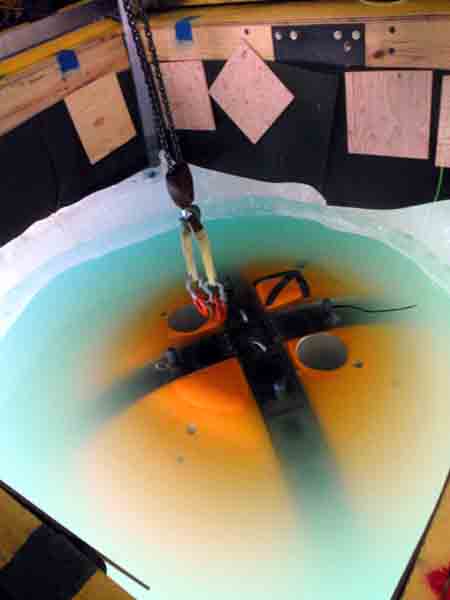 The visibility in the water has suddenly dropped from almost unlimited to about 30 cm.

Exhausted from the stressful mission, we resorted to our recovery strategy of tugging the bot in by its tether. We navigated to within a few meters of the melt hole and then Kristof slowly and carefully pulled the fiber optic line. To everyone’s relief, we soon saw a dark shadow rising up through the murk. In a few seconds the shadow became an orange blob and then the bot was home.

Upon closer inspection we were happy to find that the bot suffered no major damage from its bump into the wall. The DVL bumped the ice shelf directly but none of the sonar transducers on it were scratched, and the HID light mounted just to the left of the DVL had been bumped and was aiming upward, but it was not even dented.

Despite the chaos today, we had a successful mission. We navigated to the glacier face for the first time, got a lot of sonar data and images, and navigated home. A few more data collection runs from the glacier face and we will have accomplished our objectives here at Lake Bonney. 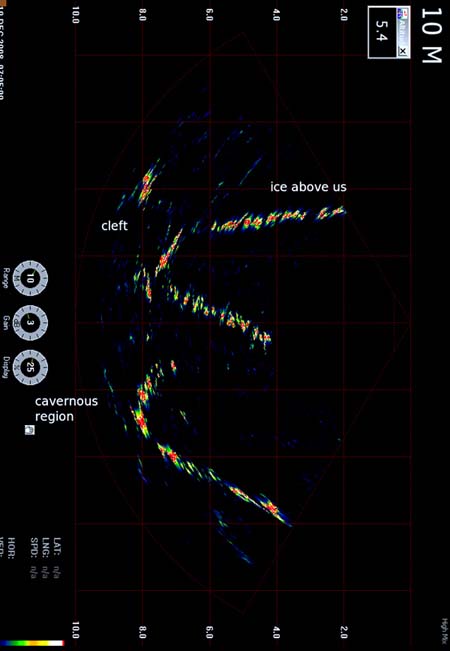 This is a screenshot of the live feedback from the DeltaT sonar. It shows a profile view of the glacier face at this point. The top horizontal stretch is the ice at the lake surface; below that, the glacier wall starts as a curve on the left; the middle point is a ledge jutting out and below that the wall recedes again. Mission control found this pattern common.