In this morning’s group meeting we discussed the possibilities for today’s mission. We determined that if we gave the bot a fairly ambitious mission plan today we might be able to get the rest of our DeltaT glacier scans done by the end of the day. We decided to go for it.

Soon after starting to go through the bot’s pre-launch checklist we heard someone hail us on the helo communications channel of our radio, accompanied by the distant beat of a helo rotor coming up the valley. We had been informed that there might be visitors today, so we figured we would be giving the grand tour to some folks from McMurdo or Scott Base (New Zealand’s science station on Antarctica). The helo landed outside the bot tent and the visitors came in. To our surprise, however, these were not the normal kind of visitors we had seen before. These folks were decked out in red and green, jingle bells, and Santa hats. After marching into the Bot House and singing us a Christmas carol or two they presented us with gifts. The boxes contained the best thing you could bring to a bunch of researchers working on a frozen lake for over a month: food. There were fresh baked cookies, bread, and candies and, one of the most valuable and rare things in you can wish for here in Antarctica, fresh fruit. 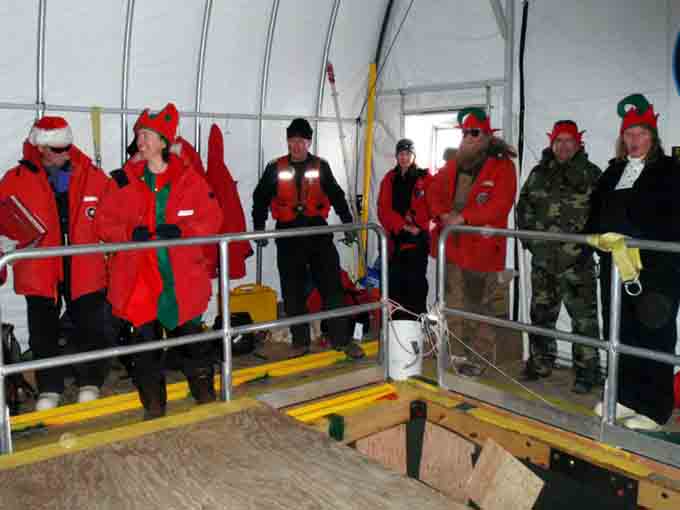 Santa’s jolly elves gather around the moon pool to sing us a carol.

Our jolly visitors departed, off to spread cheer to the other field camps, and we munched some cookies and got back to work. We completed the checklist and sent the bot on its way. There were no snags today and the bot succeeded in doing a continuous sonar sweep of the remaining glacier face. Chris took the bot’s trip home as a chance to experiment with running the vehicle at higher speeds to find the most power-efficient speed. We took the bot up to a whopping .25 meters per second!

This image is a panorama south to north across the 1 km wide glacier face.
We got more than 100 million sonar hits to build the map; only about 5 million
are shown here to keep the file size reasonable. In the center portion it appears that the glacier is actually floating on the lake (there is an undercut cave at the bottom that runs about 1/3 the length of the image). You can also see moraine deposits at either end. This is a 2D end-on rendering of the glacier—the data are full 3D and we will be generating some “fly through” videos with the UIC electronic visualization lab over the next month that will give life to this and to the lake chemistry data. Click here for the largest version (8Mb).