After our brief stint as Antarctic carpenters, we have returned to doing what we do best—working with the robot. Today we got the Bot House set up as a working mission control. The programmers set up their computers along the far wall and boxes of tools, robot batteries and spare parts were unpacked and set up on tables along the two long walls of the building. The bot and gantry dominate our workspace and setting up desk and bench space for eight programmers and technicians was a little tricky. With everything unpacked and the empty shipping cases stacked high along the walls, we set about getting the bot into working order.

First of all, the bot had to be put back together. In Texas, before we shipped the bot to the Ice, we removed the most delicate sensors and packed them in padded cases to be shipped separately. This ensured that they weren’t damaged in transport and it reduced the weight of the remaining vehicle so that it would be light enough to be flown on the helo trip from McMurdo to Lake Bonney. Now that we’re here though, all of these sensors had to go back on before we can think about putting the bot in the water. 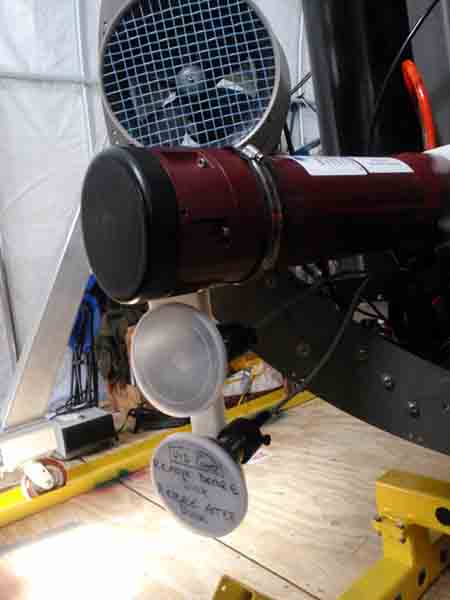 The USBL (ultra-short baseline transceiver) and HID (high-intensity discharge)lights were just a few of the components to attach to the bot today.

As Vickie bolted each sensor back to its proper place, Shilpa and Kristof worked on some of the vehicle code. Chris and Bob assessed the bot’s giant batteries and started charging them up. Bart sorted hardware and worked on developing mission plans. When Vickie went to mount the Delta T sonar to the vehicle she noticed that the bracket that should attach the instrument to the bot wasn’t here. Talking with Bill, they realized that somehow in the rush and confusion of packing the vehicle, tools, spare parts and whatnot in Texas, the bracket they had ordered had never been delivered and thus never brought. Bill and Peter therefore designed and constructed a new mounting bracket out of some extra prototyping materials we had brought along for just this kind of thing. So far this looks like the only thing that didn’t make it to Antarctica from Texas—not bad! 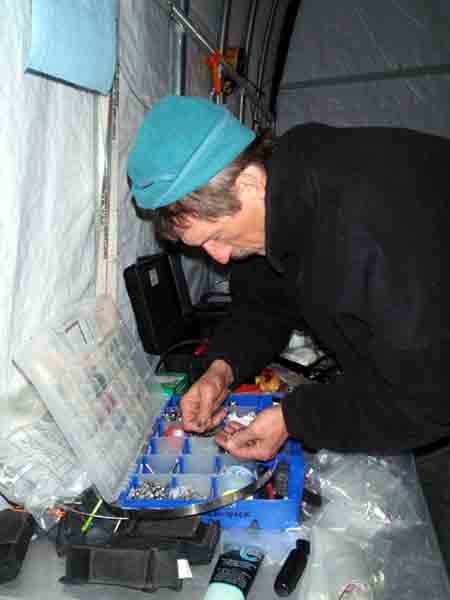 Bill finds some hardware to use on a new mounting bracket for the Delta T sonar. 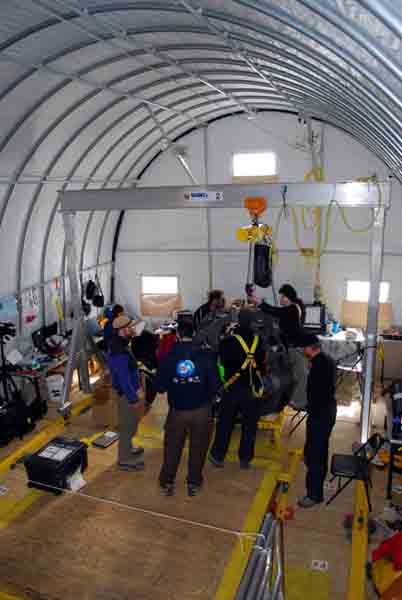 The team works to get the bot put back together and get the Bot House set up as a workshop/mission control.

At the end of the day, most of the vehicle is back together and we should be able to start real testing tomorrow.