Today we put the bot in the water. Since the vehicle hasn’t been wet since our last tests at NBL (NASA’s Neutral Buoyancy Lab) in August we wanted to check all of the electronics pods for leaks and check that all of sensors and instruments were working. The bot has traveled halfway around the world, after all. To do these checks we hung the bot from the hoist without the orange syntactic blocks we normally use to make the vehicle float. John and Peter paid particular attention to their scientific instruments on the drop sonde. They adjusted the water pump on the sonde, raising the bot out, priming the pump and lowering it again a few times to watch its behavior. With the pump in order, Chris, Shilpa and Kristof ran through the checklist of sensors and electronics: No pod leaks, sonars, DVL (Doppler Velocity Log), depth sensors, IMU (Inertial Measurement Unit), cameras, lights and so on, all working. Check, check, check… 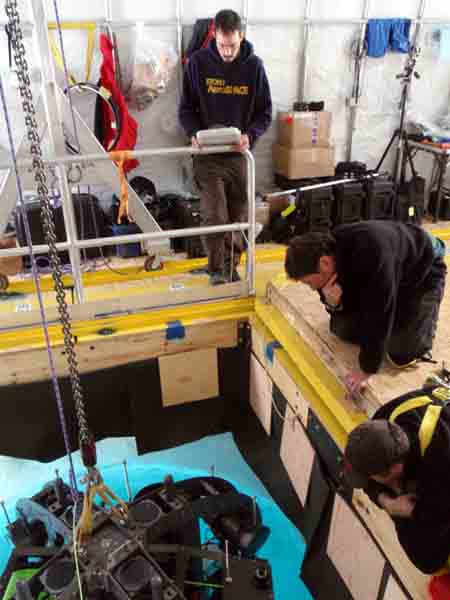 Kristof, John, and Peter watch intently as the bot is lowered into the melt hole for the first time. 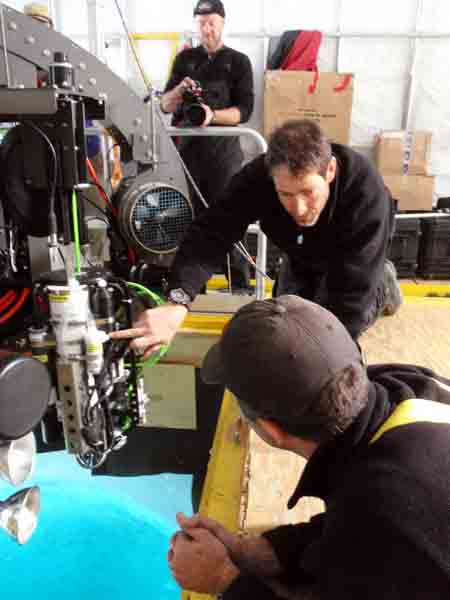 John and Peter get the Seabird pump on the drop sonde working.

One of the last few tests was to check the science payload package, the profiler. The profiler is made up of several parts. First there is the drop sonde, basically an aluminum frame with all of Peter and John’s water chemistry instruments strapped onto it. This sonde hangs from the bot by a Kevlar reinforced Ethernet cable. The cable feeds over a pulley and onto a large spool on the opposite side of the vehicle. Servo motors spin the spool to raise and lower the sonde through the different water strata in the lake. Normally, with the floatation blocks in place, we are not able to see much of the spooler functioning; only the up and down motion of the sonde is visible. Since we left the blocks off for this test we were able to watch the entire profiler in action underwater. It was satisfying to see how smoothly the level winder guided the green Ethernet cable between the spool and the pulley as it wound and unwound, raising and lowering the sonde. Several minutes into the test run, however, the spooler stopped unexpectedly. Chris noted that the software was reporting a temperature fault – it was too cold. What we found was that if we heated the electronics pod for the profiler in air with the Herman Nelson heater, the driver would function correctly, but once the pod had cooled to 10°C in the nearly freezing water, the driver would stop. 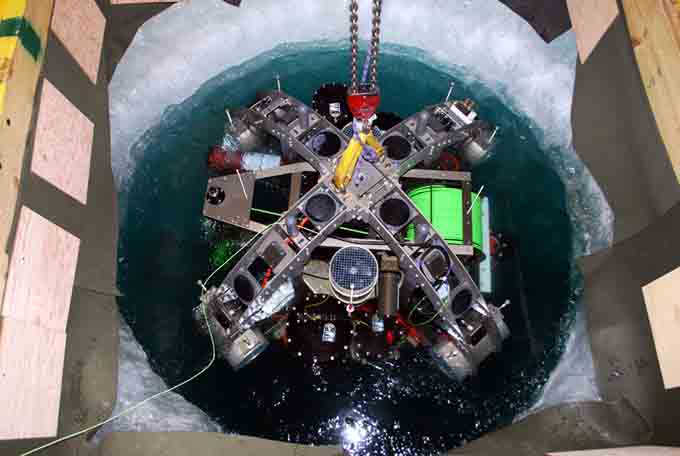 We watch from above as the spooler drum (on the right) unwinds the bright green Ethernet cable that holds the sonde (underwater on the far left). 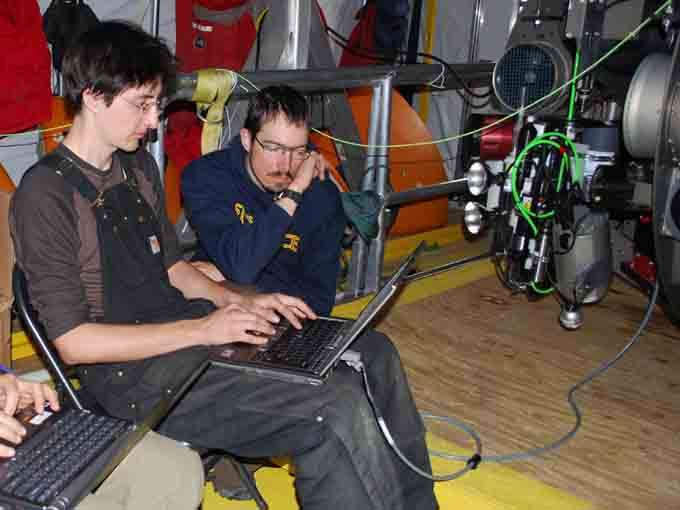 With the bot back on the surface, Chris plugs directly into the profiler electronics pod to investigate the servo motor malfunction while Kristof looks on.

Of course we had considered the effects of Antarctic temperatures on the vehicle before. We wondered if such cold water would cause equipment malfunctions. In February we operated the bot under ice in Lake Mendota in Madison, Wisconsin. Those tests identified a problem with the electronics that control the thrusters. We later traced that problem back to some poorly soldered connections – a slip in quality control from the manufacturer. The faulty electronics were immediately replaced and the bot suffered no further problems from the cold. But during the February tests in Wisconsin the profiler was still in the design phase; it didn’t exist and thus couldn’t be cold tested. So what exactly is the problem? Is there a way we can fix it in the software settings, a minimum temperature parameter we can change to allow the servos to run at a lower temperature? There isn’t anything about it in the servos’ manual and, given the time difference between here and the States, we’ll have to wait until morning to ask the manufacturer.