The first people bringing their breakfasts into our camp mess tent this morning found Bart already on the phone with the servo driver manufacturer. Fortunately, when the comm techs set us up for internet, they also gave us a VOIP phone. After breakfast we tore ourselves away from eavesdropping on Bart’s conversation with tech support to start work out in the Bot House. Just because the profiler is temporarily stalled doesn’t mean we can’t proceed with other tests, so the plan of the day was to put the bot in the water with the syntactic on and take it for its first Antarctic swim.

Before taking the bot down under the ice, we wanted to make sure that the bottom perimeter of the ice hole was snag free. The lake ice is about 3 meters thick and the level of the lake water in the melt hole is about 30 centimeters below the ice surface. The other 2.7 meters of the hole is underwater and this makes it difficult for us to judge if the wall surface is smooth or jagged. To give us a definitive answer, Peter decided to do an ice dive and have a look. As he donned all of the gear associated with ice diving in Antarctica—layers of fleece, a drysuit, dry gloves, and a full face mask—Vickie hooked up his air supply. In these kinds of ice dives, it is nice to keep the scuba tanks in the warm air at the surface and run long hoses from the tanks to the diver’s full face mask. This keeps the tanks and first stage regulators warm, making the dive safer and more enjoyable. The full face mask includes a comm unit so we could talk to Peter during his dive. He took an ice chipper bar down and busted off all of the jagged corners at the bottom of the ice hole.

Once the melt hole was prepared it was time to get the bot ready to swim. We put the syntactic blocks on, lifted the vehicle with the hoist and set it in the water. To make the bot as power-efficient as possible, we always ballast and trim the vehicle. To ballast, we add or remove lead weights to the bot to make it neutrally buoyant, so that without hooks attached it floats just under the surface of the water and neither sinks nor rises. To trim the bot we place the lead weights we’re using for ballast in specific locations on the bot’s frame so that it sits level in the water. The whole process is a little time consuming but a neutrally buoyant and well-trimmed bot won’t use much battery power for thrusting, so it is important to get it just right. In our previous tests in tanks or at the Quarries in Austin, it was easy to add and remove lead because you could just lean over the vehicle. Here, however, there is about a meter drop from the top of the platform to the water level, where the vehicle is floating, and you would have to lean out horizontally as well to work with the ballast. Since we didn’t want to drop either a person or our lead weights into the icy water, Vickie rigged a climbing rope to the gantry and, wearing a harness and using climbing ascenders, hung just above the robot to adjust the lead weights more easily. 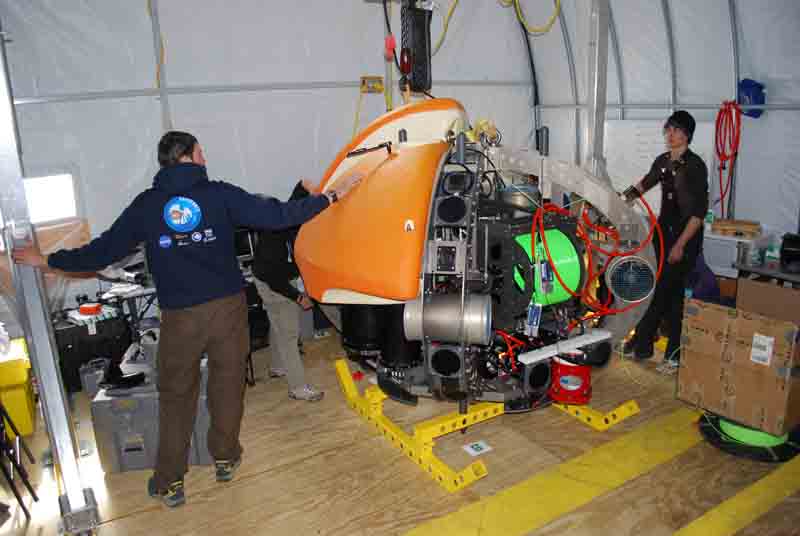 We put the orange syntactic blocks onto the vehicle to provide flotation. 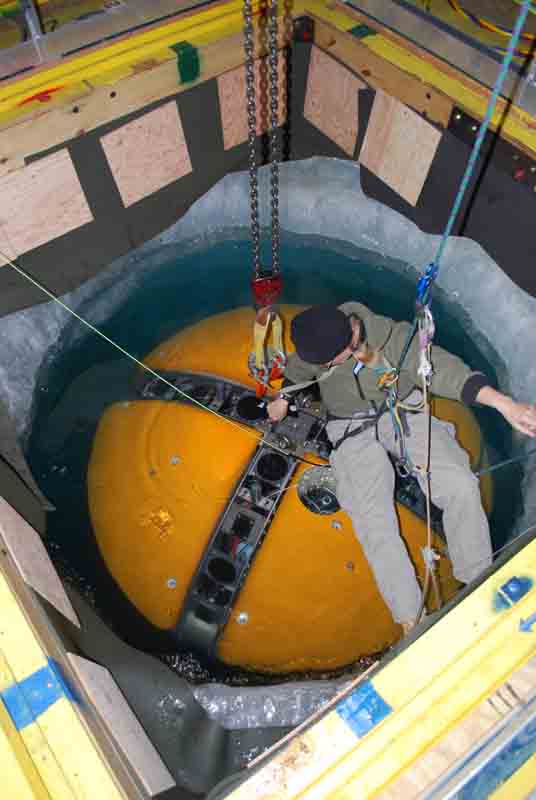 Vickie gets on rope to ballast the vehicle and get the buoyancy just right.

Once we felt confident that the vehicle was ballasted properly, Kristof, Shilpa and Chris took their seats at the mission control table and drove the vehicle down and under the ice for the first time.

“The ice is smooth!” Shilpa reported.

This was a relief. The top surface of the lake ice is anything but smooth: it is scalloped and cracked with plateaus and valleys and in places can vary in height by half a meter. So naturally we wondered about the underside of the ice. We hoped it would be smooth because it would make navigation easier and it would be less likely for our fiber optic line to become ensnared. We all crowded around the monitor displaying the view of the horizontal-facing camera. Yes, the ice was smooth as glass.

We motored the bot around under the ice testing the various sensors in action. After a while we noticed that some of the sensors that use sonar elements started to drop out and we didn’t know why. We brought the vehicle back to the surface to check it out. As the bot rose up through the hole we noticed that it looked different, kind of…fuzzy. Also, it was too buoyant. At the end of its ascent, the bot was riding almost 2 inches higher in the water than it had when we ballasted it half an hour before. Looking closer we learned that the white “fuzz” we were seeing on the bot was actually thousands and thousands of tiny bubbles coating the entire exterior of the vehicle.

The white speckles and fuzz on the bot in this photo are actually thousands of tiny, trouble-making microbubbles.

The lake water is supersaturated in dissolved gases and as the bot moved through the water, some of this gas was apparently coming out of solution and forming these microbubbles on the robot’s surfaces. The microbubbles were making the bot significantly more buoyant and were interfering with the acoustics of the sonar transducers. We’ve never had the bot in such gas-rich waters before and didn’t predict this kind of problem.

While we found this surprise to be another puzzle we’d have to deal with, Peter reminded us all that this is the kind of stuff we are here to learn about. There are two parts to the Endurance mission here in Antarctica: one is to collect data from Lake Bonney and the other is to develop some of the technology that an AUV on Europa would use. In this way, our fieldwork here is proving to be a good analog for a mission on Europa. The exploration of Europa is bound to contain some surprises, just like our exploration of Lake Bonney and the microbubbles. The more we can learn about possible issues like these in the experimental phase here on Earth, the better we could design an AUV for alien environments.

Our attempt at a quick fix for the microbubbles on the sonars was to take a small amount of Simple Green hand cleaner and rub it over the sonar faces. This seems to keep the bubbles from forming on these surfaces but we might be able to find a better substance to act as a surfactant here. To counter the extra lift given by the bubbles, for now we just threw an extra pound of lead on the vehicle.

We took the bot back down under the ice for some more tests. For one thing, we wanted to test one of our bot recovery procedures. Now that we knew that the underside of the ice was smooth, we figured that if the bot were to die, that is, lose communications with mission control or run out of battery power, we could pull it back in by hand by tugging on the fiber optic line we use to communicate with the bot’s cPCI (the bot’s main computer). To make sure, we did a practice run of physically pulling the bot back in with an extra safety cord we had tied on. It worked very easily, so we know that in a crisis we have a way to get the bot back.

During this emergency practice, we had the upward-looking camera on, and were displaying its images on one of the mission control monitors. The upward-looking cam is at the top of the bot and faces directly up. Normally we would only use it for visual homing to help the bot return to the melt hole at the end of a mission. What we didn’t expect is the kind of images we would see while the bot was just running around under the ice. We found that the ice was amazingly clear and that a lot of sunlight came through. There are thousands of bubbles in the ice. Some bubbles contain sediment that was blown onto the ice from the land and frozen in, some bubbles are white and clear. They form columns going from the bottom towards the top. It was beautiful and Peter added enthusiastically that the views from this upward camera were a source of data that no one had recognized before. The ice was clear enough that we could even tell when we had crossed under the Bot House floor.

When we finished the remaining tests for the day we pulled the bot up for the night, put the batteries on charge and went back for dinner.