Since our next moves can only happen after the bot is delivered tomorrow, today was a natural day to just take a break. The winds continued to barrel down the valley but some folks decided to take the free time as a chance to do some hiking anyhow. The others caught up on office work, read books and drank cocoa. Around the dinner table Peter explained the origins of the incredible wind we’ve been experiencing. The Antarctic continent is shaped like a giant dome, more or less. The land in the interior of the continent is covered with a massive ice sheet over two kilometers thick and the highest elevation of this dome is around the center of the continent. During the winter the rock and ice radiate their heat out to space and temperature drops. As the land cools, the air does, too. The air grows denser as it cools and gravity starts to drive it downhill. The phenomenon is called a katabatic wind and in Antarctica they are known to be fierce, cold and persistent. 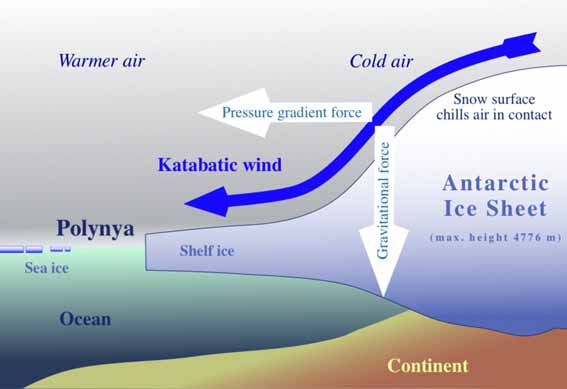 This diagram by Hannes Grobe was copied from the Wikipedia page on katabatic wind.