The main portion of the team was up at 8:30am and off to the bot garage. The late team (who planned yesterday’s mission at 3am) of Chris and Bill slept in till 10:30am then came to the lab at 11:30am along with Marianne Okal from UNAVCO. Marianne would be running a series of LADAR scans of Taylor Glacier and the Bonney Riegel narrows to complement the underwater 3D map. Together these would form a permanent 3D temporal record of the geo-spatial topography of these features at this point in time.

Marianne Okal sets up for another LADAR scan at Taylor Glacier. The far tripod, with its white sphere, is part of the geo-registration system. Three of these spheres, whose GPS position is known, are positioned within each scan frame and the laser ranges to these spheres form a unique registration solution to the position and orientation of the LADAR. Like the underwater 3D data, we use UTM (Easting, Northing, and Elevation, in meters) as the reference coordinate system.

At noon there was an exclamation from Shilpa at Mission Control that the internet was back up… following another 7-day absence. There was a momentary stuttering halt to the mission checklist while everyone dashed to check their email. By 1pm all of the system checks had been cleared and the bot was underway on Bathymetry Mission #5. The mission plan (see figure) was as similarly complicated as the previous mop up missions, with the effort being to fill in the gaps from the previous surveys. In this regard it is worth pointing out that there was no apriori “most-efficient” method currently developed (by us or anyone else) for bathymetry mapping of an unexplored sub-glacial lake. The approach we took in 2008 was that the Sonde chemistry casts took highest priority; the initial scanning and exploration of the underwater entry of Taylor glacier into West Lake Bonney second priority; and, finally, to fill in bathymetry and improve the extremely limited knowledge of the lake bottom topography (obtained by the few wire drops that had been performed before 2008) as a “target of opportunity”. We took the philosophy in 2008 that we would mount the multi-beam imager in down-look mode and take what we could get in the form of bathymetry while otherwise getting the Sonde data. Fortuitously, we now knew from the successfully completed 2008 sonde missions what the topography looked like and were now able to go about a concerted program to fill in the gaps. The approaches we have selected to the November 30, December 1, 2, 3, and 4 missions have sought to fill in the gaps with the least number of missions. These have resulted in the “gerrymandered” shape to some missions, today’s included.

Bathymetry Mission 5, on December 1, 2009 was another “gerrymandered” convoluted route to fill in gaps in the lake bottom topography left by prior missions. The total mission length was 3,352 meters with an under-ice transit time of 3.6 hours (total of 4.6 hours in the water).

By 2pm the vehicle was at waypoint BA47. There was no surface tracking this time although we did keep the data link up. The only human input on the mission was to adjust the multi-beam range and gain settings to gain the maximum low-noise bathymetry data. This “supervised autonomy” approach worked well (as it has in the past) and the swath widths (and fill factor in the targeted regions) were maximized throughout the mission. By 4:12pm the vehicle was back at the melt hole, locked on, and auto-surfaced. We then submerged again and returned to F6 for further testing of the DVL-assisted auto-sonde drop code that Chris had developed. By 6:16pm the bot was back on charge on its carrier sled in the lab and the data were being downloaded. Bill completed the mission plan for December 2 and this was distributed for comment. Since this would again push the system to its limits (through the Bonney Riegel narrows) efforts were undertaken to balance the battery stacks and achieve maximum accessible charge. By 8:06pm the batteries were out of the vehicle and being manually balanced; by 8:37 pm the imbalances had been corrected and the full stacks were put on a 3.25 amp charge for the night. The canisters were left open for a final balance in the morning. 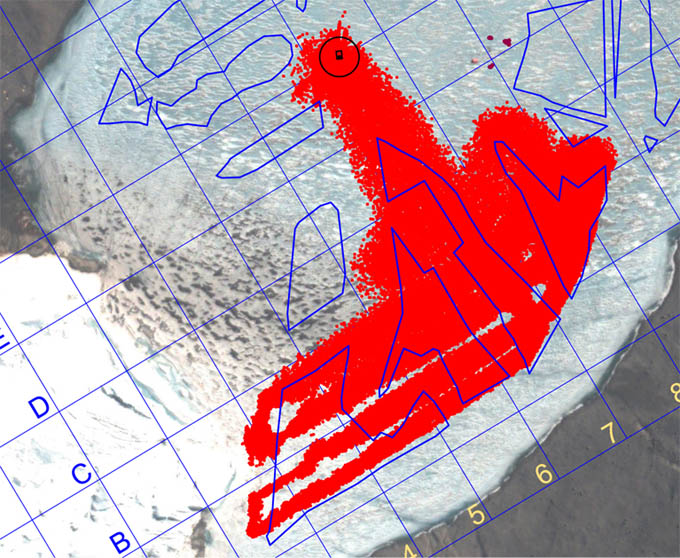 Supervised autonomy (with mission control actively modifying the range gating and gain on the multi-beam scanner) resulted in a nearly 100% fill factor in the targeted gap regions of the map. Extreme under-keep shallows prevented absolute coverage in the far western section of the map. In some places less than 2 meters of clearance under the vehicle existed—the lake shallows up considerably west of the A4-C4 line. 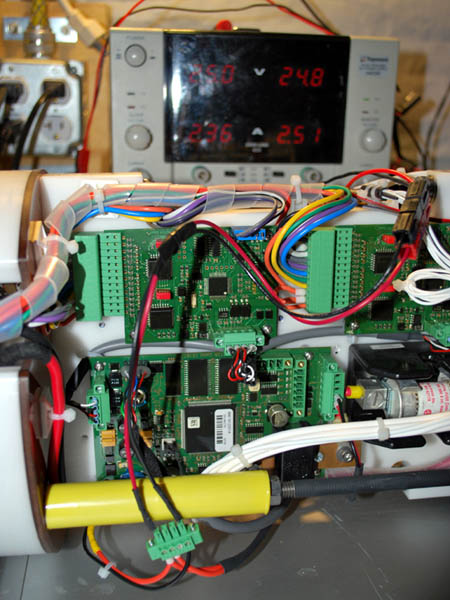 Going for maximum performance for the December 2 Narrows mission, the individual battery stacks are manually balanced prior to full charging.