The crew was up at 7am and met for breakfast at the Building 155 galley. The last of the BFC gear (sleeping bags, missing pee bottles, water bottles, food, and ice rigging gear) was collected, cleaned and returned, closing our tab at the Berg Field Center.

A final bolt-down of the syntactic to the bot took place up in Building 126 on Ob Hill. We used a pallet jack to move the 700 kg (each) yellow shipping crates to where they could be snatched by a “pickle” fork truck and taken to Science Cargo. By mid afternoon all our shipping crates were checked in at Science Cargo (including a large toolbox, the two yellow crates, and the two gray boxes that had finally come in from Marble Point as a one-stack pallet). The bot remained in Building 126 until the carps completed the crate around it. Science Cargo indicated that the bot, along with a science UAV (unmanned aerial vehicle) would be going back on a dedicated C17 at the end of January. 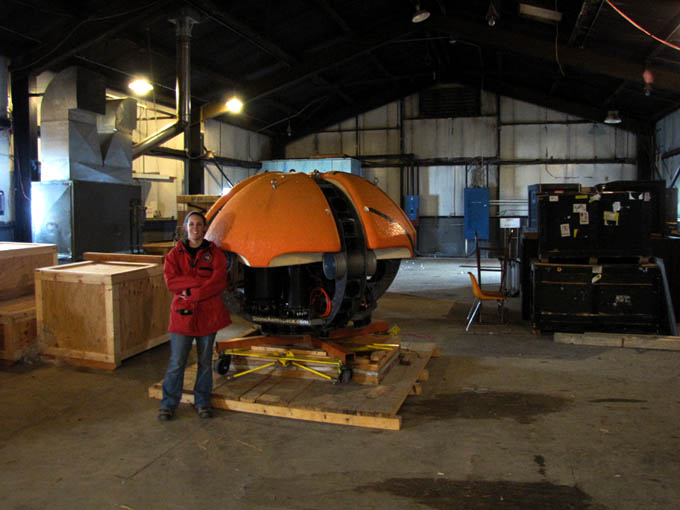 Rachel poses in front of the bot inside Building 126 on Ob Hill.

We spent the rest of the day cleaning up our rooms, packing, completing blog entries, and closing out our offices in Crary Lab. At 8pm we did the ritual “bag drag” up to the post office building where flight loads were prepared. Given the amount of field gear we had brought with us it took two heavily-laden trips per person. 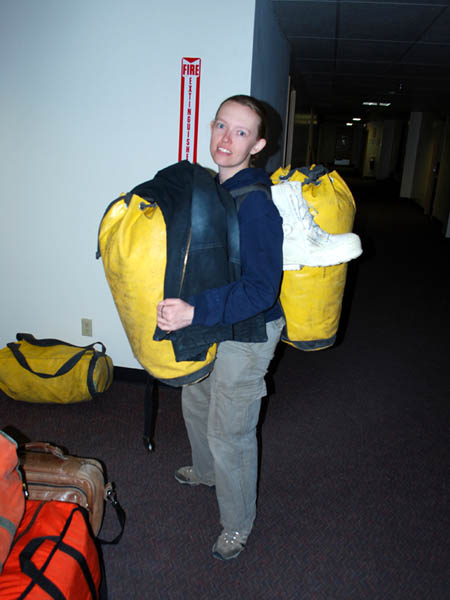 Vickie backpacks a double load on the first bag drag haul to the flight staging area at the post office building.