After a considerable amount of discussion and planning we sought to wrap up all remaining data collection and vehicle control experiments for 2009 in one final mission. The primary objective was to fill in the bathymetry map southeast of the LTER limnological cables. For this we would have to employ the diversion pole for the 4th time. The mission profile was complex and contorted and we hoped to fill in some of the northwest gaps left over from the November 30th mission. Last, we planned to test the finalized sensor-fusion Sonde cast system on a short mission down the deep axis of the lake through waypoints AC01 and AC02. 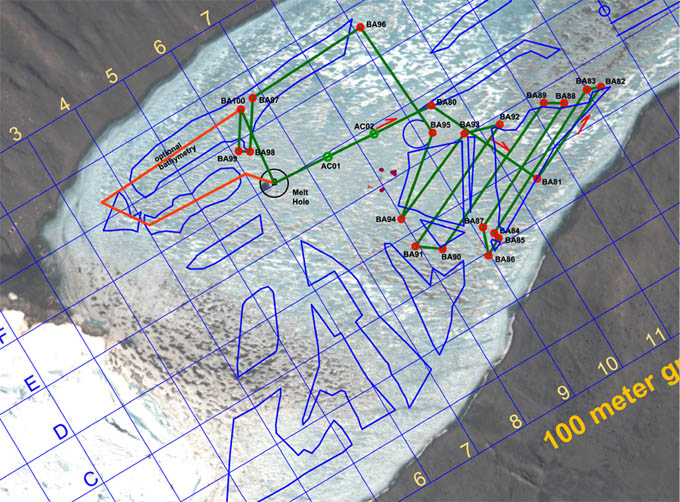 The complex December 3, 2009 bathymetry mission had as its initial objective the completion of lake floor mapping southeast of the LTER limno cables (shown as a cluster of four maroon spots south of AC02). It then proceeded north to fill in gaps in the November 30th mapping zone, and finally ended with automated sonde tests east of the melt hole.

The final mission was uploaded at 11:15am and the vehicle as in the water and neutrally ballasted 21 minutes later. The vehicle subsequently failed the ice-picking test at 11:48am and we brought it back and removed 1 kg of ballast, this time taking the precautionary measure of locking the nav solution prior to ascent through the melt hole. This procedure subsequently proved effective. The mission proceeded smoothly and it was supervised, although not interfered with, at mission control throughout the entire run. 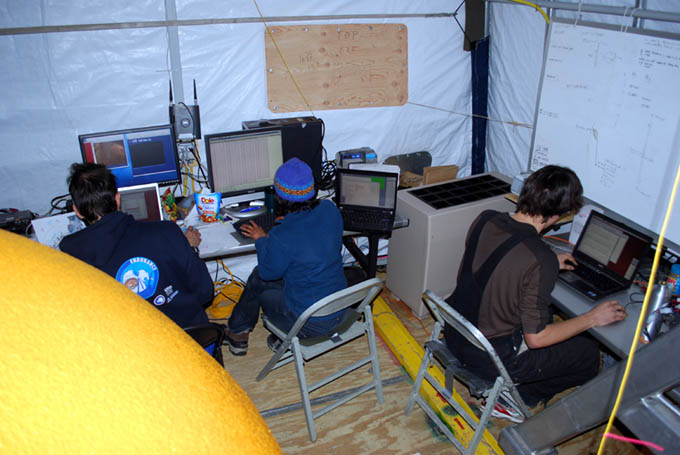 The issue of the changing ballast requirements has remained one of the curious mysteries of working in Lake Bonney. From day to day—and even during the conduct of a mission—and with no physical changes to the vehicle from one mission to the next, the buoyancy has been seen to vary as much as 10 kg. Originally this was thought to be a result of the “microbubble” phenomenon discovered here in 2008. There, we believed that super-saturated gas dissolved in the water was allowed to leave solution due to the pressure drop associated locally with the vehicle’s thruster props. It would frequently adhere to the vehicle skin as white fuzz. This, however, had the effect of increasing the buoyancy of the vehicle, which altogether was not a problem for Sonde missions. The issue of increasing negative buoyancy following an otherwise positively buoyant state in the melt hole could potentially be explained by cold shrinkage of electronics housing and flotation or possibly by trapped bubbles compressing with greater depth. But great efforts were undertaken at the start of each mission to “burp” the vehicle of any trapped gas. So this issue remains for consideration for future sub-glacial autonomous systems operations.

At 4pm the bot detected a very large boulder on the north shore of the lake, on the order of 10 meters in diameter. At 4:35pm Mission Control interceded in the mission in a planned test of one of the auxiliary navigation systems (the iUSBL). In this test Mission Control induced a failure state in which the dead-reckoning navigation system went off-line. The vehicle control system picked up on this and successfully navigated back to the melt hole on the iUSBL system for the remaining 150 meters of this first part of the mission. By 4:44 pm we initiated the second half of the mission: an autonomous sonde run east of the lab. With no intervention the bot conducted fully automated sonde casts at F6, AC03, and AC04 (parallel to, but offset to the north of AC01 and AC02). Also, given that a large rock had been detected in this zone on the outbound journey to the limno zone we were able to use this information for further fine tuning of the roll calibration on the imaging sensors. Total mission length for today, not including the final sonde run, was 3,318 meters with 4.3 hours of under-ice time. With this mission complete the 3D geometry of sub-surface West Lake Bonney was complete (see figure). As of 6pm today, with the bot safely back, all mission objectives set forth for the ENDURANCE project had been met and in most cases exceeded by substantial margins. 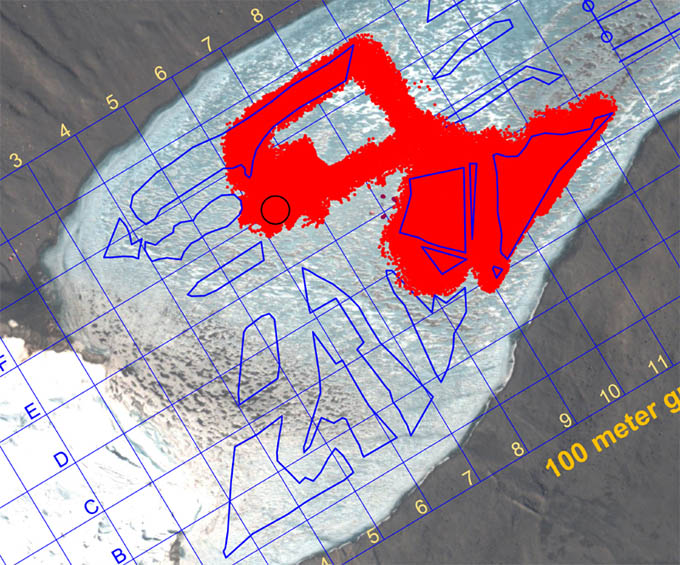 Results of today’s supervised autonomous bathymetry mission. Complete coverage (and more) was achieved in all target zones (shown by the blue polygons).

By 6:21pm the moon pool cover had been closed for the final time and a group photo of Team ENDURANCE 2009 was taken. The rails were disassembled and taken outside. The Sonde was removed and packed. By 8:04pm the four syntactic flotation quads were in their yellow shipping transport cases and moved 50 meters west of the bot garage, within helo pickup range. All of the battery stacks (5 of them) were packed and stacked. At 8:30pm the 10 kW diesel base generator was powered down for the final time and we drove back to the Jamesway at ELB. Just two days of packing and break down remain in Taylor valley. 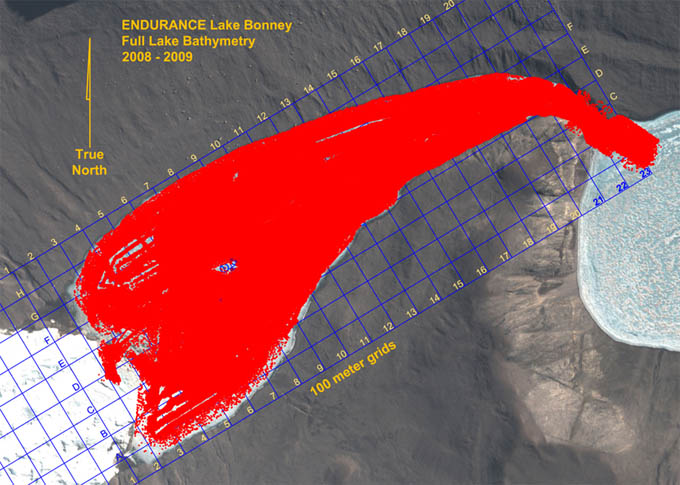 The composite result of all bathymetric data acquired in 2008 and 2009 by ENDURANCE. The entirety of West Lake Bonney is mapped along with the Bonney Riegel Narrows (where Scott’s party passed in 1903) as well as several hundred meters out into East Lake Bonney. There are other data, from obstacle avoidance sonar as well as glacial mapping from 2008 that are not shown here that fill in remaining sections up to the face of Taylor glacier. In all the map represents several hundred million measurements and by orders of magnitude is the most detailed map of any sub-glacial lake currently known. 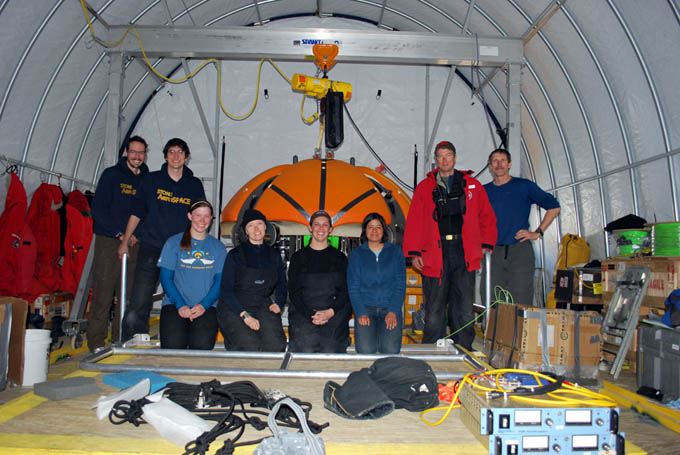