Following a team breakfast we bade farewell to Peter, Shilpa, Kristof, and Chris. They hiked off to the post office at 11:40am for pickup to the Pegasus ice runway and the waiting C17 for the ride back to Christchurch. The remaining members of the crew (Maciek, Jim, Vickie, Rachel, and Bill) met at Crary at 1pm and drove up to Building 126 to continue breakdown, sorting, and re-packing of the shipping containers.

We spent the afternoon setting up the lightweight gantry that had been used at the glacier melt hole, laying down the 6 inch steel channel rails for it, and getting the hoist loaded onto the trolley (a not-inconsequential feat given that the hoist weighed over 50 kg). We then picked up the bot for placement on its heavy wooden shipping pallet. Next came the four orange syntactic flotation quadrants (they had been removed for helo flight due to load restrictions; there were no such restrictions on the C17 so we re-assembled most of the durable systems into the bot frame. The expensive, sensitive electronics and sensors went in their own shipping containers. With the bot tied down on the pallet, we then turned the job of completing the giant box sidewalls and top to the more capable hands at the carp shop, who had been unendingly helpful this entire season. We plan to meet with them tomorrow to go over the bolt up procedures.

At that point what remained was to empty two large “Triwalls”—large 3-layer corrugated cardboard shipping boxes—into which we had dumped a good portion of our science cargo hastily at Lake Bonney and repack that load into the two now-empty yellow boxes. We put the lead on the bottom. There was a small debate over setting up the gantry to pull boxes out of the Triwalls (the men favored just jumping in and passing them out; the women wanted to use the hoist. As they had a 3:2 majority the men were chastened to finish their work at Crary while the others completed the transfer and the Rubic’s Cube dense packing. Around 5:30pm a call was received in Crary and the truck was driven back up Ob Hill to retrieve the three women. Everyone went to dinner then and retired early. While having more diverse and plentiful food, McMurdo certainly lacked the ambience that made staying up late and working at Bonney a pleasure. 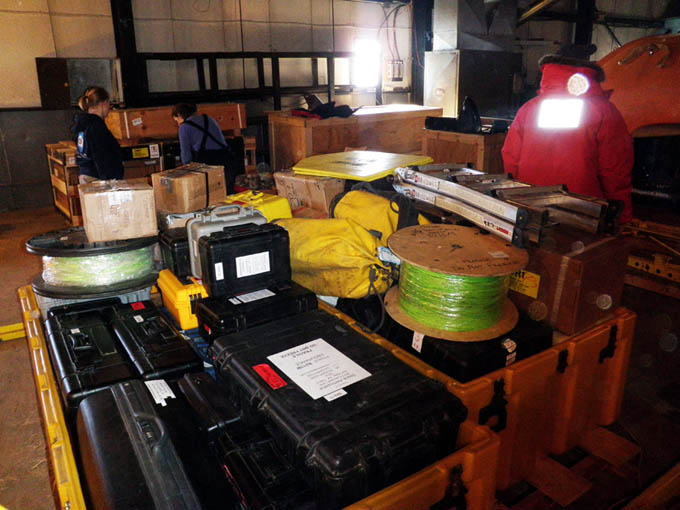