Some of us were up at 6am working on data reduction and blog postings. There was a small team meeting at breakfast at 7:15am. Emma and Jim helo’d back to West Lake Bonney today to pack up the last remaining BFC items (tables, chairs, stove, heaters) contained in a small auxiliary Jamesway hut that had been erected adjacent the bot lab during the original set up in October. There had been a mis-communication last Saturday with the carp crew there about who would wrap that part up and so this last bit somehow never got done. Since no one gets cleared to leave MCM without cleaning up their field camp mess, back we went.

We spent the morning doing an inventory of all equipment in the two large yellow shipping containers. At 1pm we assembled a critical mass of crew at Building 126 and took down the hoist and gantry then transported that by truck back to the MEC shop. By 4pm we had the two yellow shipping crates closed up and cargo-strapped, ready for transport. We picked up the carpentry foreman over at the Carp Shop and went back to Ob Hill to discuss proper tie down procedures for shipping the bot as well as the bolt up of the sidewalls and top to the giant crate that went around it. We returned at 5:30pm and met the rest of the crew for dinner, including Emma and Jim who had successfully completed their mission to WLB. 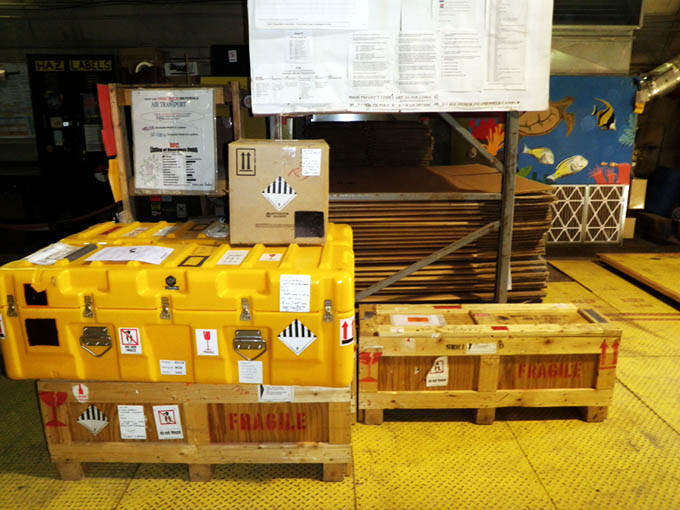 This evening everyone spent time sorting through their ECW gear for tomorrow’s bag drag. The remaining six of Team ENDURANCE (Maciek Obryk, Jim Olech, Emma Steger, Vickie Siegel, Rachel Price, and Bill Stone) were now on the manifest for the December 11th C17 flight to Christchurch. Personal gear sorting at the end of a season is somewhat tedious. MCM gives you up to 70 kg of checked baggage but only one orange hand bag to carry on board, which includes your laptop. There is also a similar small orange bag that you can pack with emergency clothing in the event the flight “boomerangs” (has to abort and return to MCM due to weather or mechanical issues). The rest stays locked down in the cargo nets if the flight returns so you have to anticipated that if things go wrong you will be living with those two small orange bags for some time, hence the considered packing exercise.