The lead team of Vickie, Kristof, and Bill was up at 6:40am and off to the bot garage by 8am. They reloaded both battery stacks into their housings and into the bot, then reconnected power lines and re-installed ballast lead. By 10am the system was powered up and showing 100% power charge.

By noon the bot was over the melt hole for the sonde instrument calibration. Outside, winds began to pick up steadily from South Pole (katabatics) to 30 knots gusting to 35 knots. Wind gusts hitting the north end of the lab were violently shaking it—every time it moved it blew out the heater. The air temperature at the start of the mission was a warm 32F but dropping.

We shortly received a radio briefing that helicopters were grounded at McMurdo for at least two days, preventing arrival of chief project scientist Peter Doran. At 12:20pm we performed a sonde test drop to 18m depth to verify changes made by Chris and John to the sonde instrument parameters—all looked good on the live sonde monitor at mission control so we proceeded. By 12:30pm the bot was down at 5 meters depth and performing a test of ice picking behavior. This time, due to variations in temperature, the vehicle was proving to be too heavy so we recalled it to the melt hole and removed 500 grams of ballast. 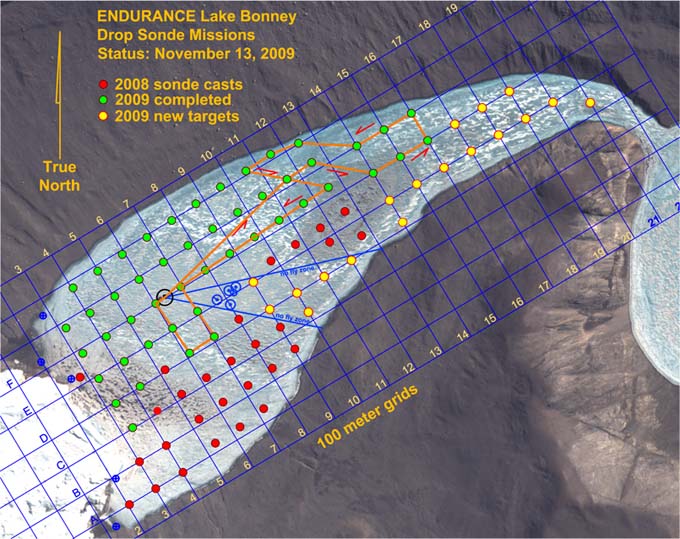 The total mission length was 3400 meters, including additional post-return navigation testing that was performed in the vicinity of the melt hole involving the USBL secondary localizer. Following the additional navigation tests the power was down to 12% and still usable, validating Bart’s hunch of several days ago regarding the battery balancing.

The team returned to camp at 9:20pm (an early night for us) and discovered to everyone’s dismay that the winds (which were still driving hard) had uprooted Shilpa’s and Chris’s tents. After dinner the entire team broke out replacement tents and helped set new sites up, these tied down to bigger rocks. 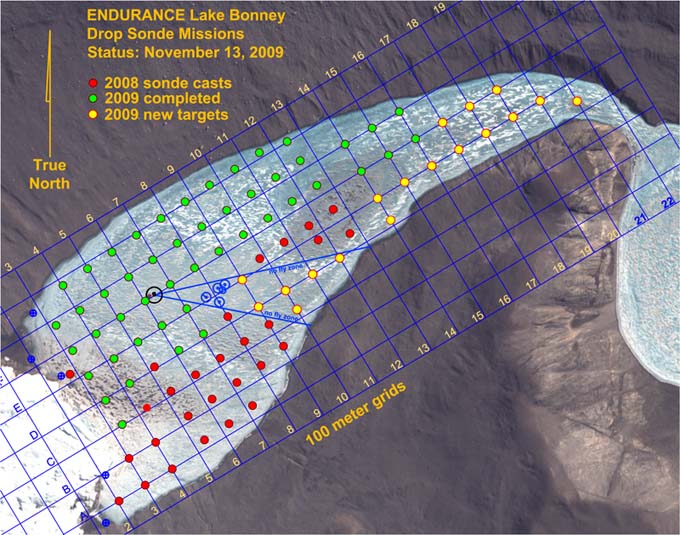