We awoke to news that McMurdo was in Condition 1 (no travel). Here in the valleys it snowed during the evening at the higher peak levels but down low it was still dry.

During the routine (but extensive) pre-mission checklist we found that one of the six thrusters was showing a low level of pressure balance volume so it was taken out for maintenance and a spare swapped in. 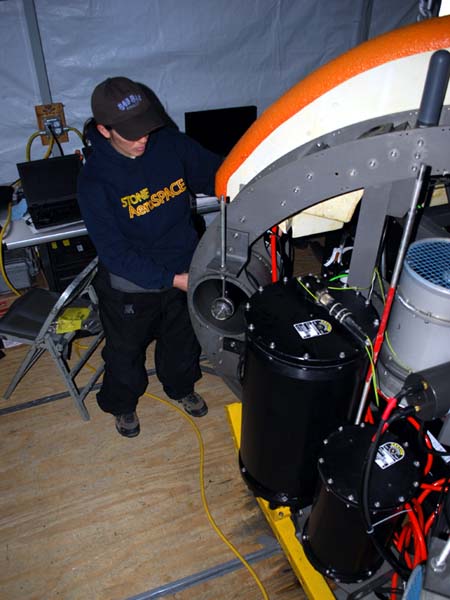 Rachel completes the swap out of the #2 thruster for maintenance.

Prior to yesterday we had planned to incrementally (and conservatively) work our way out towards the “narrows” separating east and west Lake Bonney some 1.5 kilometers east of the lab. Using the revised mission planner and the improved battery behavior we realized we could acquire all of the remaining east end sonde casts in one mission. A year ago we had felt it would be required to have a secondary melt hole near the east end for “inflight refueling” and had re-designed the charging system on the vehicle for that purpose. Now with the improved vehicle travel efficiency and double power onboard it appeared we could run significant east end forays.

The mission began at 3:52 pm and the vehicle returned to the melt hole at 10:30pm with all sonde points acquired. Importantly, we had conducted a detailed multi-beam side-looking survey at two locations at western head of the Narrows. Multibeam was able to image all the way to shore on both sides. Depth at lake center in this area was 11m under keel, leaving enough to consider a more advanced mission in which the bot actually drove through the narrows and into East Lobe. At D21 (our furthest point today) we were just out of sonar range to image the location measured by Scott. 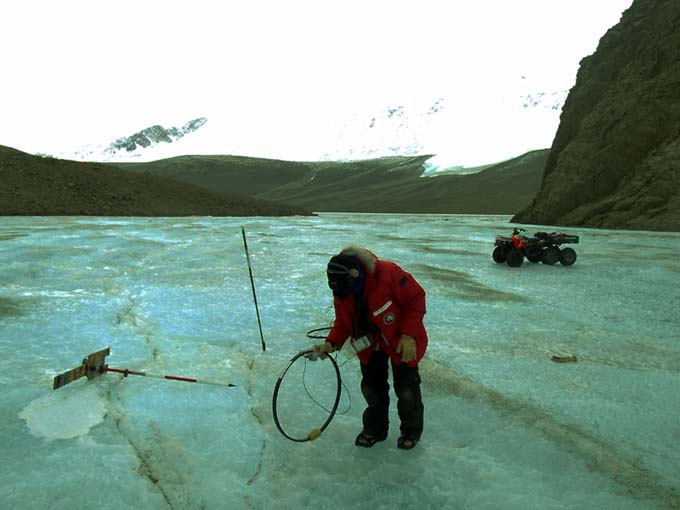 Marking the furthest exploratory mission for ENDURANCE, Vickie tracks the bot at 1.5 kilometers from the melt hole. Behind her is the “narrows” between west and east Lake Bonney, looking into East Lobe. Scott’s team took measurements here December 17, 1903.

Shortly after turn around (although still with more than half the sonde casts remaining to be performed) we had our only technical glitch for the day—at F19 communications dropped out for an unnerving 30 seconds. Then it suddenly came back. Shilpa analyzed the data and began searching a section of the onboard code she had been suspicious of for some time, ever since the earlier data link drop outs. With nearly 100,000 lines of software running the bot this would have been an insurmountable task during a mission, but Shilpa had spent a lot of time tracking this over the last 10 days and now found it—a “memory leak” in a routine designed to track the status of certain vehicle systems. Unchecked on a long mission, the errant process filled up memory and died. When restarted, it freed up memory and the system came back. The fix, until a more optimized re-write of that section could be performed, was to pre-empt and periodically re-boot that process—one of scores running the vehicle. Given the location of the bot at the time (1.5 kilometers from the hole) this was an impressive bit of thinking under pressure on the part of Shilpa.

At 8pm, still more than a kilometer from the lab, the grapel (1mm diameter micro hail) storm began with persistent 25 knot up-valley winds. The lab was already invisible from station F14 and we joked about having to navigate the tracking team back to the lab by following the bot home under the ice. By the time the tracking team returned there had been an accumulation of 1 inch of snow by completion of mission. 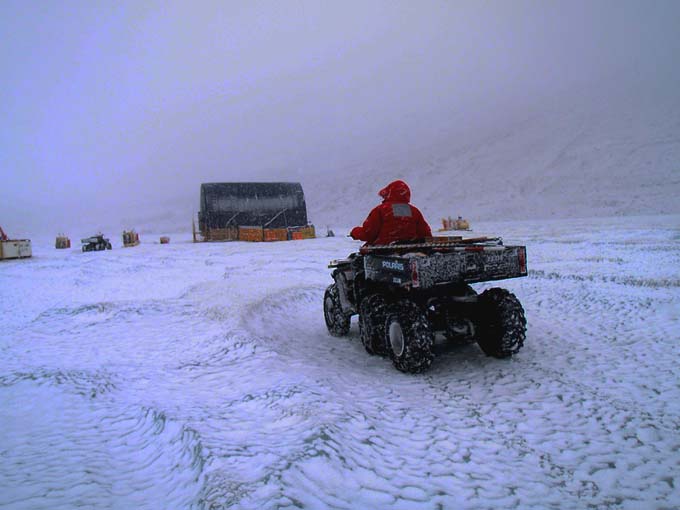 The grapel storm turned into a blizzard, obscuring the lab from 500 meters out in a white out. 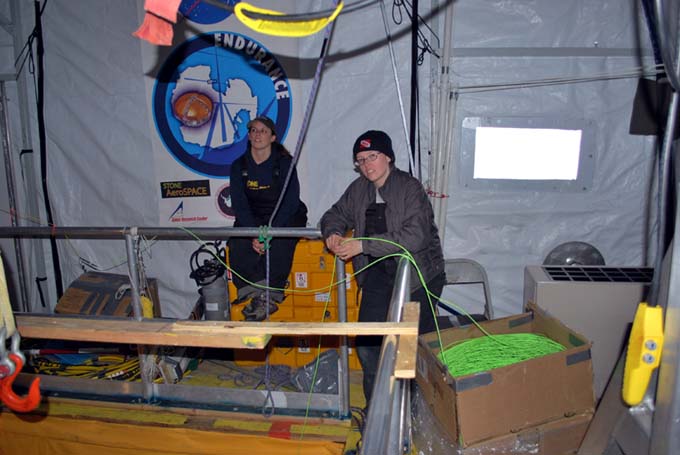 By 11pm the bot was on its sled at the lab. Power reserve was 21% when the it reached the melt hole, following a total of 7 hours 3 minutes in the water. At end of mission we found the bot very positively buoyant—adding the 8 kg dive bag we use to lower it each day would not get it underwater. Heavy micro-bubble formation had occurred all over the bot. There were also micro-bubbles all over the sonde (down-looking) camera window. 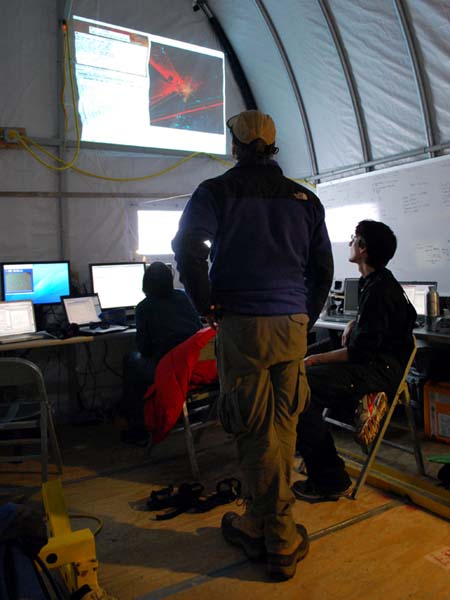 Shilpa, Bart, and Chris watch the new situational awareness visualizer at mission control as the bot “discovers” the melt hole on return from its long trip. 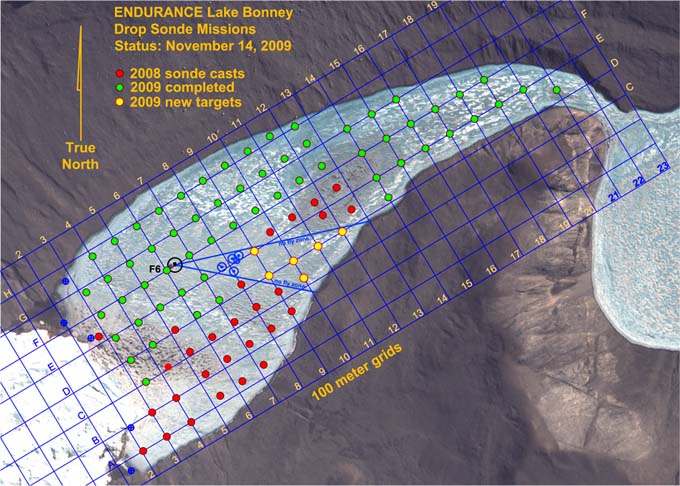 We drove home to East Lobe camp at 1am.