With the success of the previous day’s foray into the “no fly” zone behind the LTER limno cables and the knowledge that with proper battery balancing we could likely hit 5 kilometers of cruise range with the new power stacks, we began hatching a plan to visit East Lake Bonney. The previous year we expected that it would be necessary to create an auxiliary melt hole a kilometer east of the bot garage where we could surface and recharge the vehicle and then maybe continue on to the end of West Lake Bonney. The new batteries made that obsolete, but it did not solve the problem that the “narrows” at Bonney Riegel made a sharp 90-degree turn. With the presence of boulders along the lake edge, the probability was high that the data fiber would be drawn into the boulders and snag the vehicle if we attempted to navigate through the narrows. The success of the diverter pole concept changed all that.

We began work on the complicated mission plan at 11am. This work was punctuated by the arrival, on short notice, of a Bell 212 load of NSF visitors who toured the lab for close to an hour then choppered off. By 2:20pm we had the plan and vehicle trajectory worked out: the anticipated mission length was 3,931 meters with 8 sonde drops through the center of the Narrows. Run time was predicted at 6.5 hours door-to-door with 5.5 hours underwater. Some time before that, Vickie had driven an ATV out to the Narrows with the RTK GPS equipment and had set out two new locations “R2” and “Pivot2″—the latter was the location for the diversion tube and the former was the targeting point for the bot some 30 meters to the northeast of the tube to ensure the fiber stayed on the north side of the tube as the bot headed southeast. At 3pm John Priscu drove out to run the Jiffy drill and install the pipe. By this time we had also upgraded the radio communications system at the lab with a 5-watt base station that could be received all the way to East Lake Bonney camp—the previous hand-held radios inside the lab had difficulty with interference from the metal arch frames of the habitat. 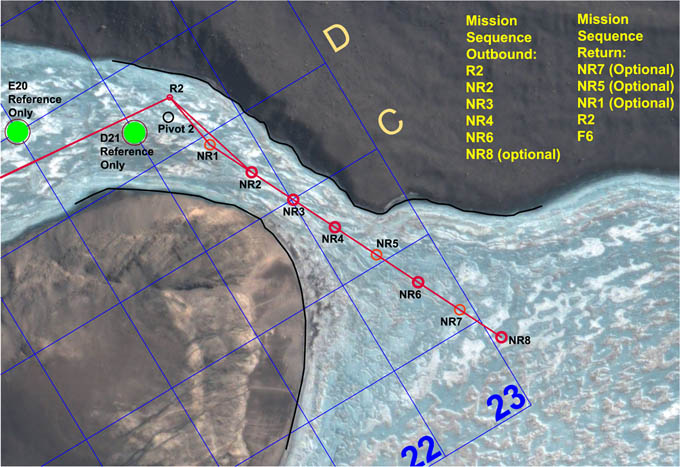 The bot was programmed to proceed directly to mid-stage targeting point R2, 1520 meters from the lab while mapping the south lake shore grounding line along most of that distance. It then proceeded southeast through the narrows and more than 400 meters out into East Lake Bonney. It performed 8 sonde drops along the way (the “Ninja Romeo” series).

The November 18 narrows mission would be the longest ever attempted with ENDURANCE. To ensure the bot would make it back we kept the vehicle on charge through the sonde calibration cycle. The vehicle was then lowered into the water, the sonde “homed”, and the cables freed to allow it to begin its journey. 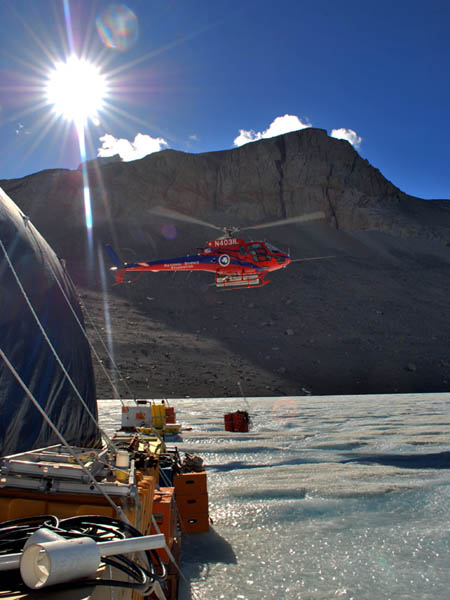 The bot garage was abuzz with helo activity today, with several pickups and drop offs. Here an ASTAR is dropping off another load of AN8 (diesel) for the main 10 kW generator.

By 3:50pm the bot was underway to station R2 with a predicted 100 minute run time to get there. Meanwhile, Kristof began a novel dance physically miming the vehicle programming for today with Shilpa calling out the various commands to verify that the bot was going to do the correct thing inside the narrows. We had the multi-beam sonar configured in side-look mode and it had been programmed to scan the south shore of the lake from an 80 meter standoff on its way outbound (see figure for a glimpse of the data results from the 3D visualizer). However, once it got to the narrows we needed to perform a series of obstacle avoidance sweeps to ensure the way forward was passable. The least energy configuration for achieving this (and today every coulomb counted) was to perform a 180 degree yaw rotation of the vehicle at the sonde drop points and then continue forward, alternately sweeping each side of the narrows; on the return to base the bot would sweep the opposite quadrants and all of this was verified by Kristof’s miming routine. For the same reasons, prior to launching the bot today we kept the vehicle on charge while the sonde calibration was being performed and only removed the charge cables at the exact instant when the vehicle was ready to be released. 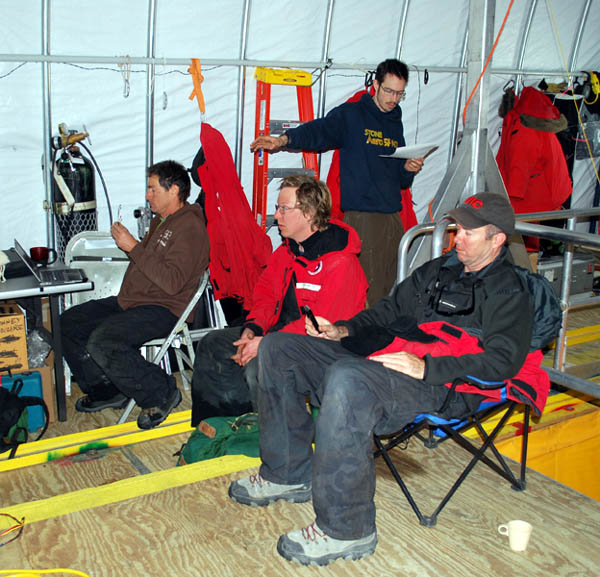 Kristof Richmond (standing in the bot garage) mimes the mission programming steps for the run through the narrows. 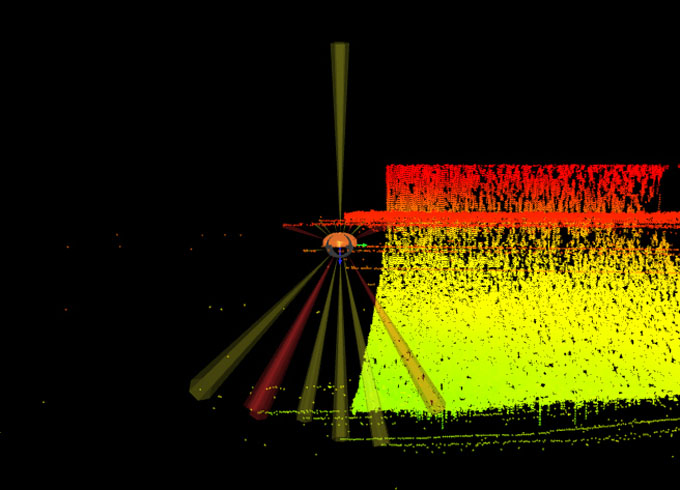 In addition to the sonde runs through the narrows, today was also the first lateral imaging bathymetry mission. We maintained an 80 meter standoff range from the south shoreline (which we had acquired with RTK GPS) and mounted the multi-beam sonar in its horizontal (forward-looking) position. Because the vehicle is orientation-independent, we rotated the multi-beam so that its field-of-view was perpendicular to shore and drove the vehicle “sideways” down the lake to achieve the desired scan. Yellow points in this figure are valid bottom bathymetry hits; the bottom of the red points represents the underside of the ice cap. Above that are multi-path ground bounce (fictitious) points which will later be filtered out in the post-processed data set.

At approximately 5:45pm Bill and Vickie detected the vehicle under station R2 and verified it was sweeping past the pivot point on the correct side for a safe passage. They continued tracking it for another 400 meters out into the wide open expanse of East Lake Bonney. By 8pm the vehicle was back at R2 and the diverter tube was removed, leaving roughly 1600 meters remaining to reach the lab. The vehicle arrived at the bot house on cue shortly before 10pm and post-processing of the data took place for another 2 hours. We headed for bed at 12:30am. Given the long last three days we gave people till noon to recover. With the additional maneuvering to station F6 and some short range navigation testing prior to surfacing the total actual mission length was 4250 meters. 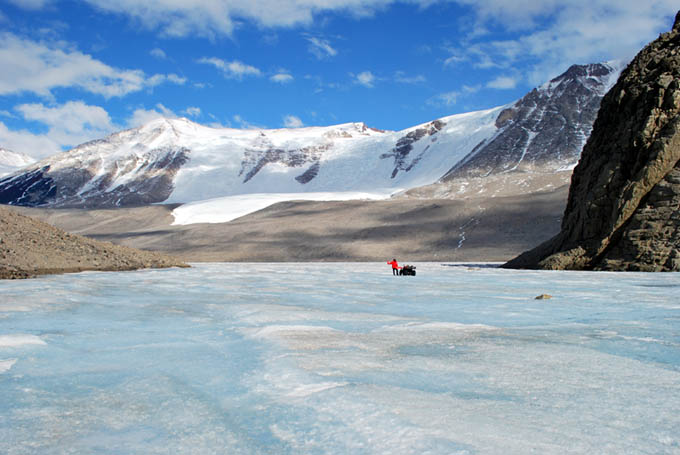 Bill sets station NR2 in the heart of the Bonney Riegel narrows. 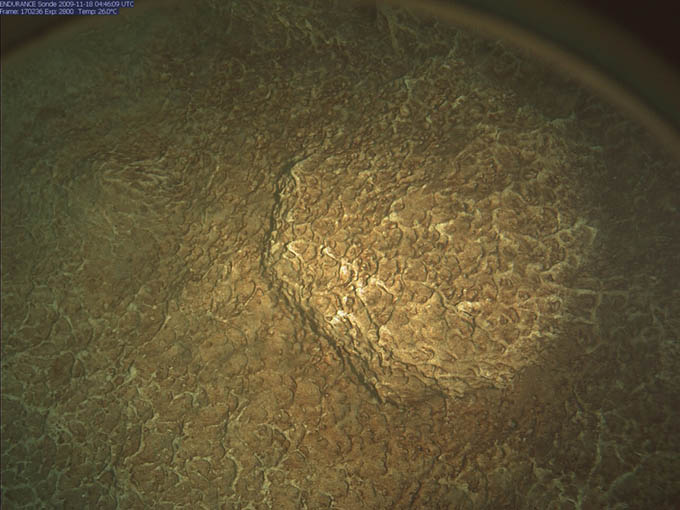 The sonde camera bottom image at station NR2, showing what appear to be dendritic microbial mats. 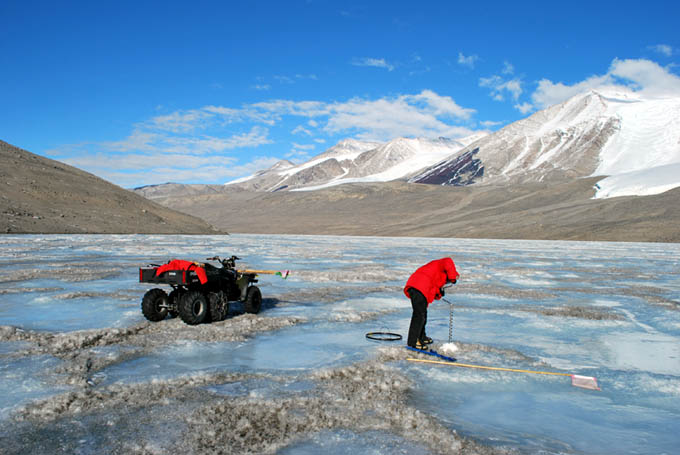 Looking out into East Lake Bonney from sonde point NR8. 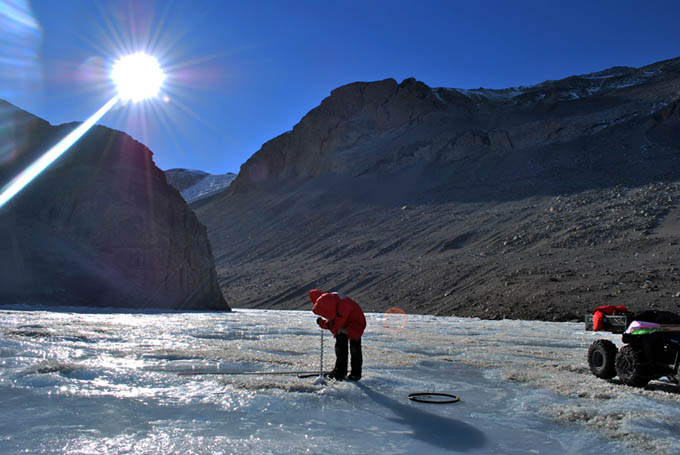 Today’s mission was of some historical interest. In 1903 Capt. Robert Falcon Scott’s party passed through the narrows at Bonney Riegel. In addition to taking several black and white photographs they also measured the width of the narrowest portion of the ice at that location. This was a crucial measurement that, together with the high resolution multi-beam measurements just acquired by ENDURANCE, enabled us to demonstrate that the water level in Lake Bonney had risen more than 16 meters since Scott’s team was there. We wondered what they would have thought had they known that 106 years later a robot would be hovering beneath where they had stood.

Lake Bonney water levels: 1903 vs 2009. This computer-generated plot shows a slice through the 3D sonar data acquired by ENDURANCE as it navigated through the narrows. Scott’s party, whose ice width measurement is plotted to scale here in red, almost certainly stood at this location, about halfway between NR2 and NR3. The top horizontal line represents the surface ice cap level today; the second horizontal line represents the measured underside of the ice cap today. 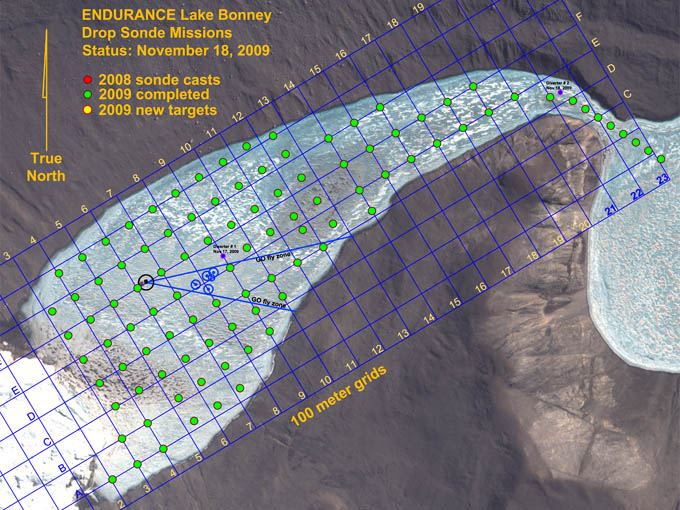 With the December 18th mission the entirety of West Lake Bonney sonde grid was completed, plus the additional 8 casts made through the narrows.