With the sonde casts completed for 2009 we turned our efforts today to the more complicated task of exploring beneath Taylor glacier. We completed a 3D map of the entire face of the glacier (and its north and south lateral moraine areas) in 2008 but in the central portion of the glacier it appeared that the glacier was floating on top of the super saline chemocline at 14 meters depth. Below that, we had no 3D imaging returns (due to acoustic bounce off the denser water). So our next objective was to go through the chemocline, neutrally ballast the vehicle at a depth that would split the difference between the beginning of the chemocline and the lake bottom (at approximately 28 meters in that location) to give us the best chance to enter any sub-glacial caverns, if they existed. The problem with this scenario is that there is a dramatic increase in buoyancy at the chemocline. Earlier measurements from the LTER project predicted a water density of 1090 kg/m^3 at 20 meters depth and 1110 kg/m^3 at 40 meters depth, thus a precise ballasting would be required to achieve neutral buoyancy at the desired depth. With a vehicle displacement of approximately 1.5 cubic meters estimates for ballasting the vehicle at 21 m depth ran as high as 160 kg of additional lead that would have to be added to the vehicle—otherwise it would bob like a cork on top of the chemocline.

We were operating under further, administrative, restrictions imposed by the environmental impact statement (a 3 cm thick document) that the project had to file in compliance with the Antarctic Treaty (the Dry Valleys are in a specially protected locality). This allowed for no powered flight below the chemocline except for limited forays permitted immediately adjacent the glacier. This presented a logistical problem: we had to fly almost half a kilometer from the lab to reach the glacier, yet the vehicle did not have sufficient vertical thrust to maintain itself within the fresh water lens if ballasted to operate neutrally below the chemocline. The approach that evolved over 2009 was as follows:

The second and third steps required a second portable gantry at the auxiliary melt hole and a means to quickly attach and remove the lead. Bill and Vickie spent today transporting lead to the bot garage from the helo drop zone and working up a rigging system for quick attachment of the lead. The solution was low-tech: eight heavy duty contractor open-top haul bags were connected to four sets of double 11 mm PMI rope harnesses that could be looped over the four auxiliary lift eyebolts between the four syntactic flotation blocks (see figure). The ballast calibration test would take place tomorrow. 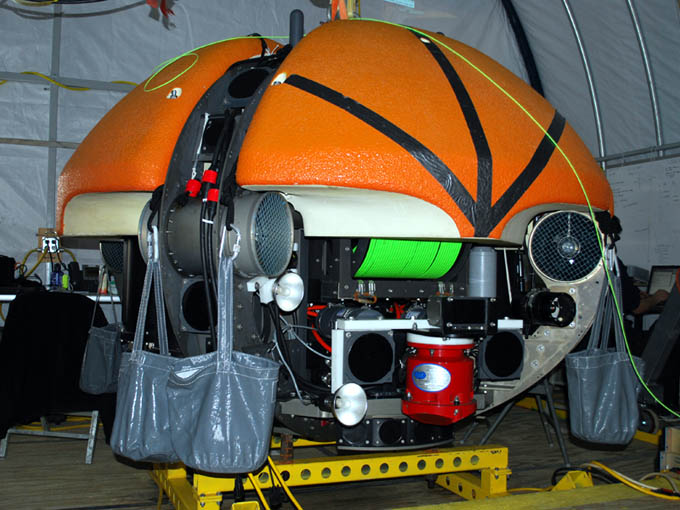 View of the vehicle with the sub-chemocline ballast carrier test rigging.

Meanwhile, Kristof, Shilpa, and Chris performed several hours of short range calibration runs with the vehicle out to 200 meter radius from the melt hole to test the sensitivity of the iUSBL navigation system. These suggested that the melt hole transponder battery was dying. We subsequently disassembled the transponder and replaced the power pack.

The team returned to basecamp at 8pm. At that time John Priscu announced that the sonde data were indicating a potentially exciting discovery of an anomalous, very cold water entry near Blood Falls at cast G3. He and Peter Doran had discussed the findings and requested that we develop a mission plan for a refined sonde cast matrix in that area to localize the source. Everyone was in bed at 12:20am.