This was planned as an extremely long day. The team was up and working early and by 10:30am a pulley system was installed over the melt hole and the first test load of lead had been loaded into the carrier bags located about the circumference of the vehicle. Three tests were conducted with the following resulting data acquired: 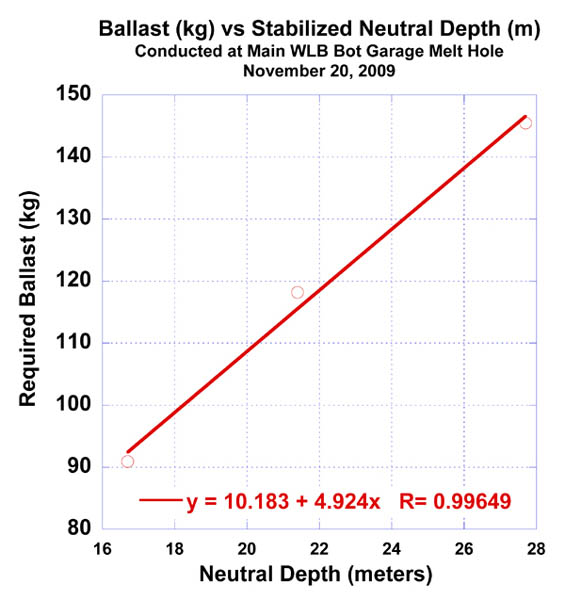 The recorded sub-chemocline ballast data at the main lab melt hole showed a near linear fit. The team planned for initial ballasting to 21 meters depth to explore underneath Taylor glacier.

No thrusters were used in these experiments and, because the overhead electric hoist only had 6 meters of range, we used a manual, 2:1 rope pulley system and ascenders to maneuver the vehicle passively down into the chemocline. 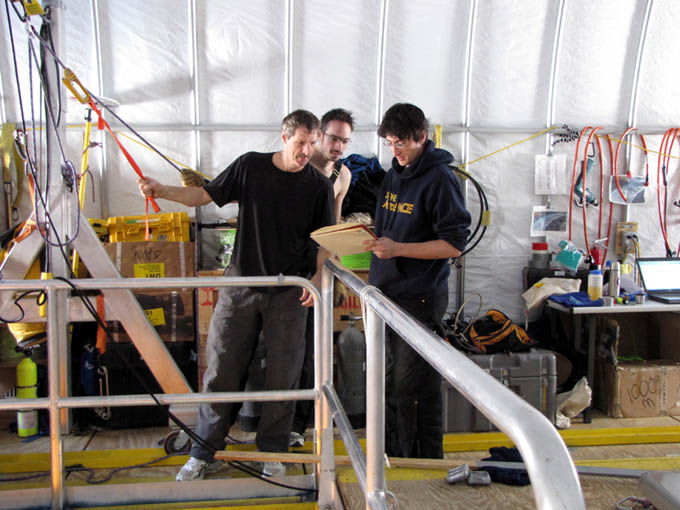 Kristof and Bill man the 2:1 haul system to retrieve the bot following a neutral ballast test. The vehicle was sequentially weighted and the neutral stabilization depth in the sub-chemocline zone was recorded. These were compared with numbers Chris (at right) had predicted based on free-release accelerations (which we could record very accurately with the onboard IMU).

Meanwhile, Vickie had re-acquired the GPS location for the glacier melt hole (now labeled GMH09), since the position had moved since our original fix several weeks earlier due to abnormally warm weather over a two day period sending runoff water ponding at the original site. By this time GM09 was 1.9 m in diameter—still too small to allow for the bot to surface there—and Maciej and Peter had two Hotsy coils running 24/7.

Although the original mission for today, following the ballast tests, was to scan the central portion of the glacier where the sub-chemocline mission would be run and thence make a trial approach and docking at GMH09, interest began to change amongst the science team to conduct a refined grid sonde mission near the glacier effluent source. A total of 39 sonde casts were being discussed with a predicted 9 hour run time. It was decided to forego the glacier scanning and docking experiment to get these sonde data. It was going to be a marathon mission, after which the team would sleep in late, take Sunday off and then return to the sub-chemocline mission on Monday. 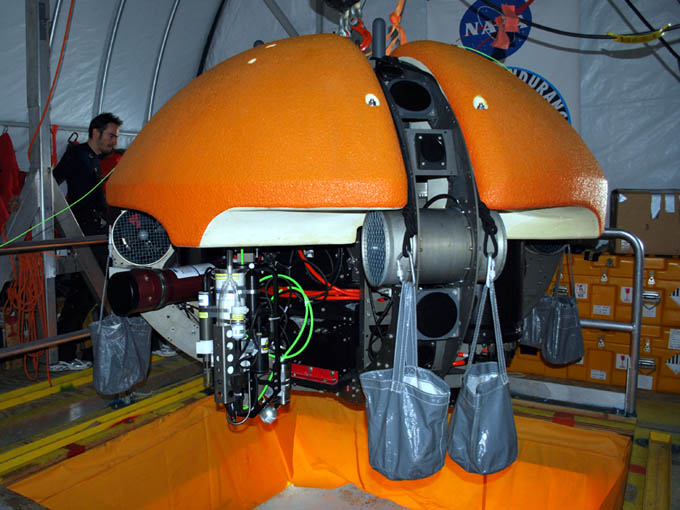 The ballasted bot: with 145 kilograms of lead distributed evenly in eight satchels around the perimeter.

By 2:44pm the vehicle charging had been completed and the mission plan was generated and loaded for the “Fine Grid” mission. However, at 4:30pm, not long after the bot had been released for descent through the melt hole, bubbles were seen coming out of the vehicle. The vehicle was immediately recovered and inspected and found to be in working order—the bubbles apparently having been from a captured pocket of air that did not get released during the normal “burping” exercise that we perform before releasing the vehicle. This false alarm pushed our schedule too far and it was decided to abort the mission and start early tomorrow.

At 5pm Vickie and Bill resumed the RTK GPS survey roundup of prior sonde cast location, completing all but six. Everyone was in bed by 10pm.