Everyone was up at 7am. The rumor today was that helo-ops was going to make an attempt to reach Peak 1882 today to repair the internet repeater link that has been down now for 11 days and counting… it’s only after you lose your high-tech link to humanity that you begin to realize how remote the Dry Valleys are. 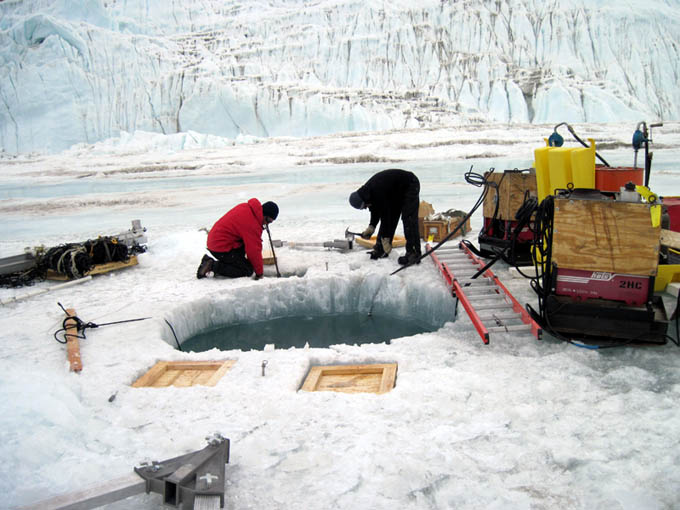 Jim and Maciek continue work on GMH09, the glacier melt hole. We are still at least a day away from being able to surface at this location.

By 10:13am the bot was in the water and being “burped”. This was usually accomplished with a boat pole, causing the vehicle to rock significantly in pitch and roll to encourage trapped air to come loose. Chris had implemented a text translator for the vehicle status monitor so that critical warning messages would be vocalized over the speaker system in the lab. Thus, hearing the computer-generated phrase “High Roll and Pitch” boom out over the speakers meant that you were rocking the vehicle sufficiently to purge the residual air bubbles. By 10:22am Sonde Mission 16 was underway to Taylor glacier. Shortly before noon the mission was aborted. The data feed from the sonde instrument payload was being intermittently interrupted. In normal operations the Sonde was an independent autonomous entity and it would relay data packets to the main System Executive that oversaw management of the mission. Today, the System Executive reported all systems operational but for some reason the data link to the Sonde would periodically drop out. Since the fine grid sonde mission was the objective, we could not continue with only partial data being recovered. Thus we issued an override causing the vehicle to return to the lab.

During the half hour return flight from the glacier we pondered what had happened. There was no question that whatever problem had arisen was not in the main vehicle but lay somewhere between the main power/data interface and the sonde. The key clue lay in the fact that the data drop outs appeared to be periodic. The only thing that was periodic about the Profiler system was the rotation of the drum that was spooling out the instrument package. Because the drum rotated and the data and power had to come in through a fixed cable connection we employed a device known as a “slip ring” to avoid twisting the cable. This is a rather complicated device that transfers all of the electronic connections through a series of rotating contacts, all contained within a waterproof housing. We focused our efforts there. At 2pm, with Vickie leading the investigation, we pulled the slip ring from the vehicle and found it to be flooded with highly salty water. Since we had maneuvered only in fresh water during today’s mission this could only have come from the previous day’s sub-chemocline buoyancy calibrations. As we carefully dissected the instrument we discovered something odd: a radial o-ring at one end of the sealing cover was not in its proper groove, but rather was compressed into a radial gap between two of the rotating cylinder core elements. The unit had been refurbished in mid-2008 and apparently the technician charged with the reassembly had mistaken the rotating clearance gap for the o-ring groove and installed the o-ring there. From a casual glance it would have looked correct. But when the system had gone to 27 meters depth the previous day the external hydrostatic pressure was enough to buckle a short section of the o-ring inward into the gap, thus creating a pathway for water to enter. Enough water seeped in to leave a quarter liter of the brine sloshing in the bottom of the slip ring. As the drum rotated, the contacts would periodically immerse themselves and short out, dropping the communications data for a short period of time. Fortunately, the contacts themselves had been robustly designed and had not corroded. Vickie completed the debug and rebuild by 4pm. During this time the vehicle had been placed on charge and by 5:30pm we were back in the water and headed for Taylor glacier. 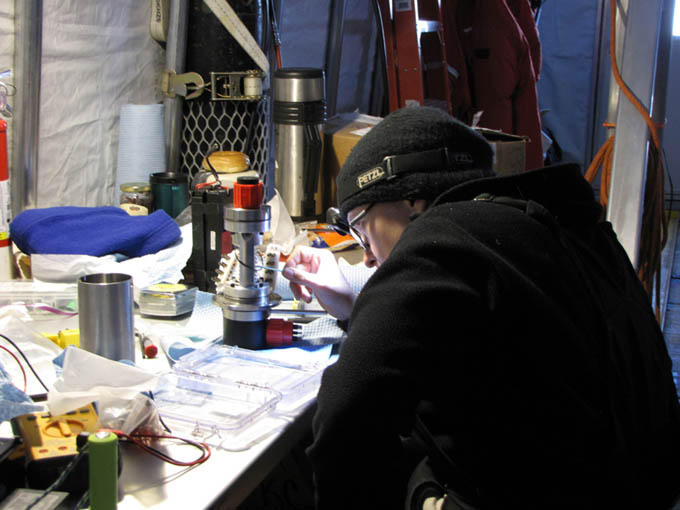 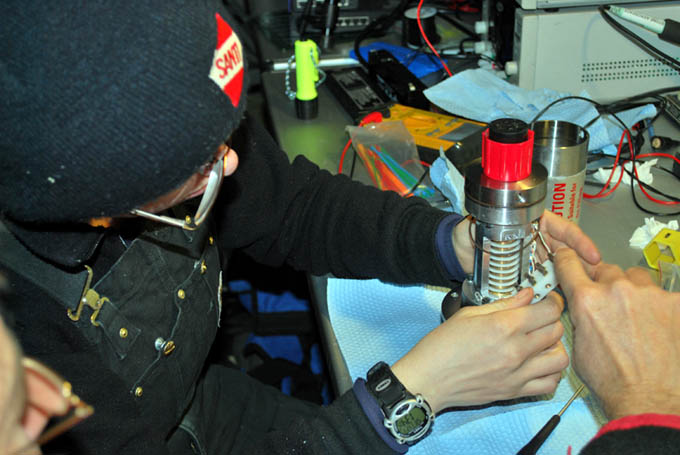 Re-assembly of the errant slip ring.

The mission proceeded almost flawlessly from that point forward, with the surface tracking team spending the next 8-1/2 hours on the ice keeping up with the bot as it maneuvered to the 39 pre-designated sample points. The live GPS fixes for the actual sample locations are shown as small dark blue dots within the red and yellow target circles. The majority of the navigational drift, where present, was due to the vehicle sliding on the ice ceiling during ice picking (when the thrusters were shut down for power conservation during a cast)—the ice cap frequently was not flat and given the very low friction of the ice picking contact hemispheres it would slide more than a meter on occasion. We were not able to reach point BF14 (see figure) due to the presence of underwater obstacles. We retargeted to a point halfway between BF13 and BF14, then moved on to BF16, then BF15, and BF15a (shown as an un-labeled blue dot under the glacier) before resuming the remaining as-planned sonde casts. During the cast at BF15 the floor sediment in the last few meters absorbed the altimeter sonar pulse and the auto stop system did not trigger. The instrument payload contacted the bottom momentarily before mission control caught it and ordered a retrieval. The sonde instrument readings appeared to be unaffected and the mission was continued to completion. The bot returned to the lab at 2am and the final crew returned to basecamp at 3am. 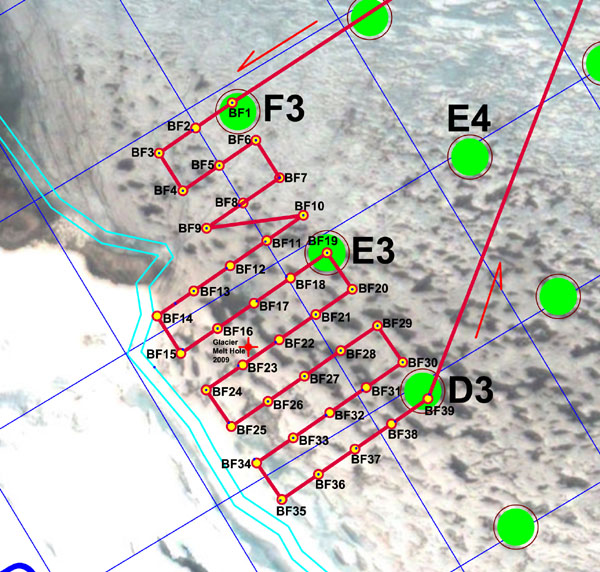 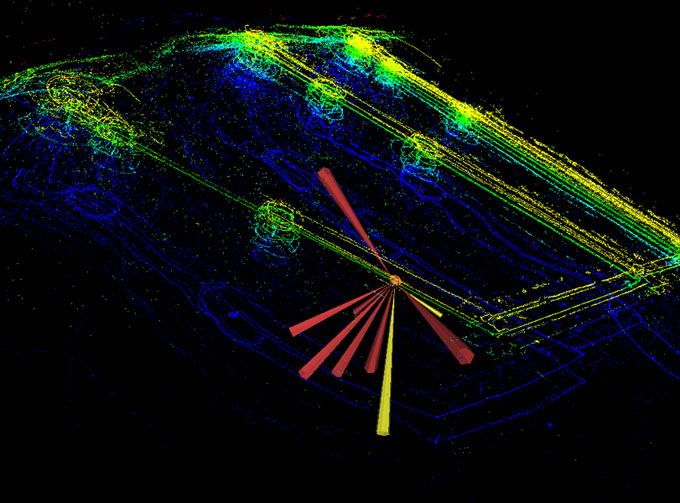 A portion of the mission trajectory. Yellow and bright green lines show the trace of the vehicle sonars on the underside of the ice cap; deep blue lines are bottom sonar returns from the lake floor. Circular clusters of activity show locations of sonde casts. The vehicle thrusters were shut down during these times and, if the ice surface was not flat, the vehicle could either slide, rotate, or both over short distances. Surface GPS recorded the final stabilized location of the sonde cast.

Although this mission was not targeted specifically at Taylor glacier, we were within multi-beam sonar range and caught several interesting glimpses of the underwater portion of the glacier. The bright red points show the underside of the ice cap and the beginning of the top of the glacier. The ice cap thinned as it approached the glacier. The shadows between the green and yellow points highlight the unknown region beneath the glacier we hope to investigate in the next few days.