The team was up at 7:20am discussing the mission plan. John Priscu requested a synoptic fine grid measurement, meaning essentially that we would need to re-run as much of the original 39-cast grid as possible. Given that at least 14 of the previous casts were good (BF1 to BF14) we decided to invert the mission trajectory and would target BF39 as the first cast for today (see figure).

The mission plan for November 23, 2009 involved a clock-wise repeat (in reverse order) of the November 21 mission to recapture the sonde casts between BF15 and BF39.

By 10am the team reached the bot garage and began working up the mission plan and going down the pre-launch checklists. We suffered a minor setback during the morning battery top-off charging when one of the parallel high power amp systems was connected to a battery with reverse polarity. The battery promptly shut down on that system (the protective circuitry worked). It was not software re-bootable. There was an immediate conference and the consensus was that the internal battery fuse had blown. Vickie and Rachel pulled the battery housing from the vehicle and disassembled it on the workbench. A 35 amp fuse solved the problem and both batteries were back on charge by 2pm. Labels were installed on the charging cables to preclude a future error. 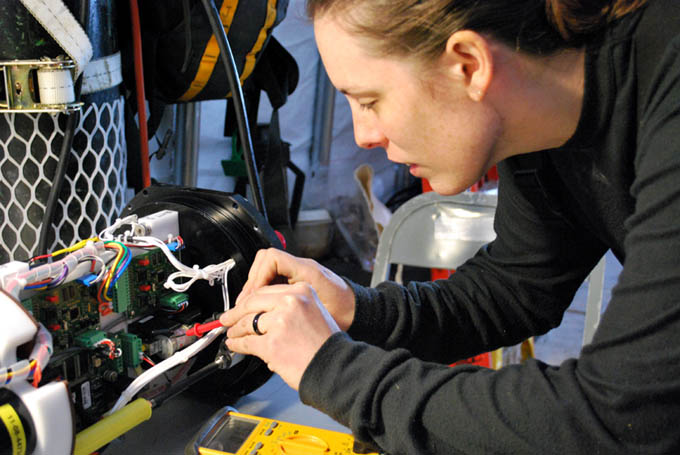 Rachel replaces the fuse on battery stack A.

Meanwhile an investigation of the SeaBird water pump used on the Sonde sensor suite proved that it had indeed been clogged, although it was not immediately evident from an external inspection. John, Vickie, and Chris disassembled it and found a small piece of gravel blocking the impeller. By 4pm the vehicle was down-hole and passed both the ice-picking (positive buoyancy) test and a sonde test cast at F6 that John reviewed and found to be delivering valid data. With that the vehicle began a half hour traverse to the glacier. The protocol for today was slightly different than two days ago. We skipped the surface PAR measurements (John indicated he already had what he needed from that area) and only performed GPS-tracking at the grid end points. The data from the previous mission had been reduced this morning by Bill and found to indicate a 1.7 meter CEP navigation accuracy, including the effects of sliding (up to a meter or more) that occurs during ice picking stabilization (due to the uneven, sloping underside of the ice cap). This was repeatable enough accuracy that we did not need to ground-truth all casts today, just the ends of each scan line for a spot measurement check. 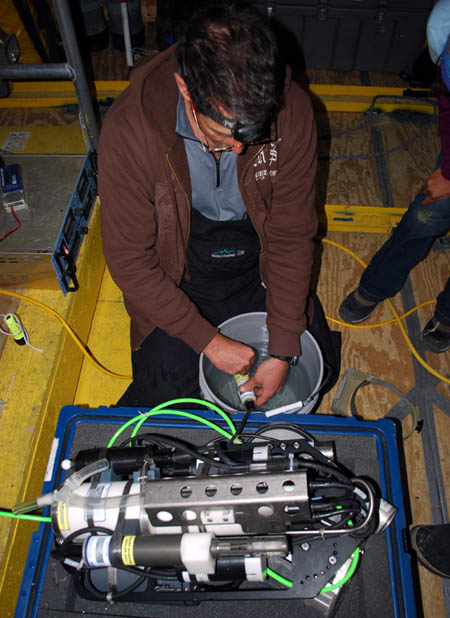 John Priscu begins the investigation into the clogged water pump on the Sonde instrument package.

Vickie and Bill left the bot garage at 4:15pm to lock in the starting fine grid position for the vehicle at BF39. However, at 4:30pm, with the bot only a few tens of meters away from the radio location team, the navigation system crashed. Chris immediately confessed that he had, unbeknownst to everyone on the team until that minute, re-written the vehicle status monitor the previous evening and installed it to see how it would perform. It took close to half an hour after leaving the melt hole before a bug in the new code manifested itself and dropped the navigation system. Fortuitously, the bot was not far from fixed Sonde cast station D3, for which we had solid GPS coordinates. Thus, Bill and Vickie talked the mission control team in to the known point by providing guidance vectors to closure. When the bot was directly beneath D3 the coordinates were uploaded via the data fiber and the nav solution was back on track. Chris purged the new status monitor and re-loaded the prior version and we were back on the job. 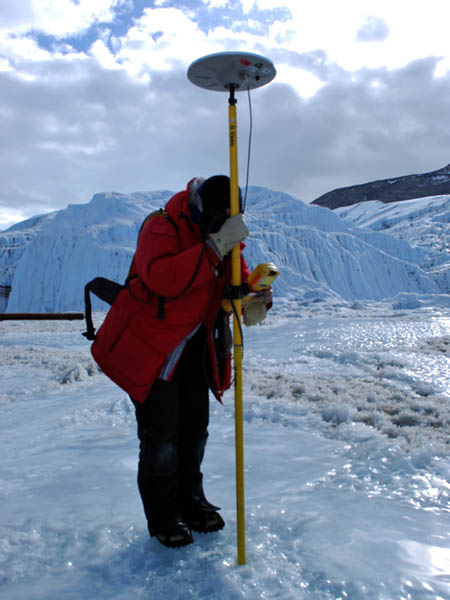 Vickie locks in the GPS coordinates for sonde cast BF39, start of the fine grid sonde casts for today.

Things proceeded smoothly for the next five hours until 9:20pm when the cast at BF10 again lost altimeter data in a particularly non-acoustically-reflective zone of soft lake floor sediment and momentarily touched bottom before mission control could issue an over-ride (they could see it happening on the sonde down-look camera). We discussed the portent of this in view of the previous loss of data update to those sensors (3 of them) that depended on the water pump and Peter made the call to end the mission. He had been monitoring the live data from the sonde instruments along the way and was pleased with the data. They had already indicated that the anomalous phenomena of interest (a previously unknown cold water source at -20 meters) was located further south and west from any of the remaining grid points (BF9 through BF1). Combined with the previous good casts from BF1 through BF14 Peter declared the data set to be complete and we issued the recall message to the bot. It returned at 9:55pm and completed autonomous melt hole detection and docking.

While conducting the sonde casts we also programmed in yaw-rotational sweeps of Taylor glacier in preparation for the upcoming sub-glacier exploration. This plan view shows the edge of the glacier (in bright blue) along with section lines for the next two profile images. All of these were created using the multi-beam imager mounted in the forward-looking position.

A multi-beam side-look view of the north Taylor glacier moraine under the Lake Bonney ice cap.

Multi-beam sectional image of Taylor glacier beneath the Lake Bonney ice cap. Note the undulation of the lake ice thickness and the thinning as it approaches contact with the glacier (due to warm water run off from the glacier as summer begins to arrive in Antarctica). The main object of interest is the dark gap under the ledge at 16 meters depth. To see further, the bot has to be ballasted to descend below the chemocline, and will be the subject of the next few missions, now that GMH09 (the glacier melt hole) is open.

In parallel, efforts at GMH09 (the glacier melt hole) continued, with Peter, John, and Bill setting up the gantry crane over the hole and mounting the second electric winch. The hole now appears to be large enough to permit the bot to surface there. 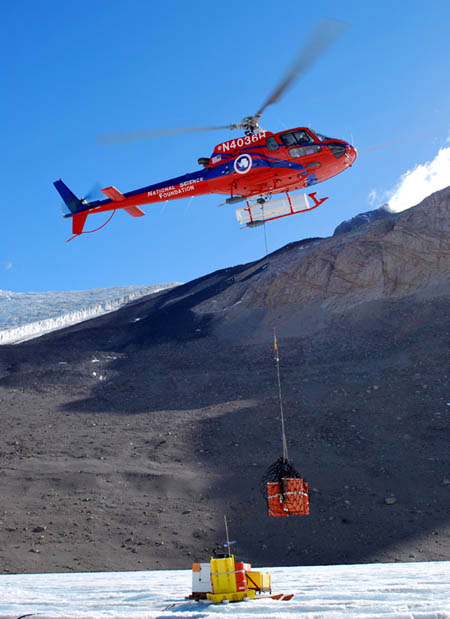 More diesel fuel for the Hotsies arrives to complete the melting of GMH09.

The long ride back to East Lake Bonney camp continues to get longer as the moat ice begins to crack up, in some cases leaving 10 cm gaps where none existed when we first arrived. By 11:30pm the entire crew was back at camp working on dinner. It had been a day of success mixed with small glitches. Today we concluded that an investigation into the (now repeatable) Sonde altimeter spoofing under certain sediment conditions on the lake bottom needed a better-automated solution. With the sonde casts now complete and upcoming sub-glacier exploration and lake bathymetry pending, however, this became a side project that we vowed to return to before departure.