The team was up at 9am. A little over a centimeter of dusty snow had accumulated over the night and it was dark and overcast, unusual for the Valley. The surrounding peaks were obscured in snow and clouds. The internet link was down. Helo ops were cancelled today. Neither supplies nor personnel would be making their way towards Lake Bonney. 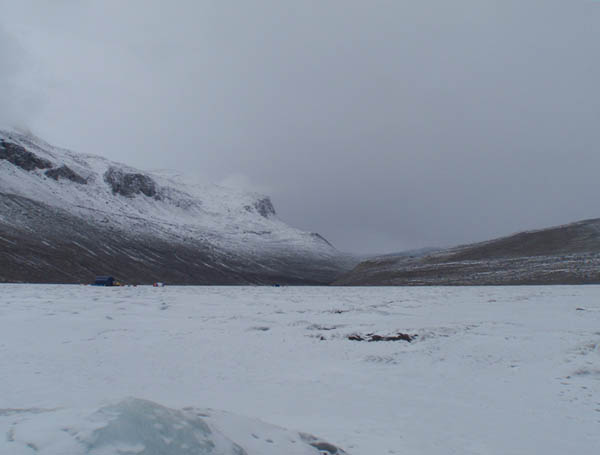 The afternoon view of the bot garage and the southern flank of Mt. J.J. Thompson from GMH09.

The plan for today was to run a horizontal sweep of auxiliary sonde drops at 25 m spacing along the glacier face from north to south at about 10 m standoff from the ice wall in order to obtain a more exact locality for the mystery source of cold water that had been detected in the fine grid. The grid casts of the last three days had indicated that a pronounced cold source was coming in at around 21 meters depth from somewhere south of the BF35 to BF39 line. The presumed source was from the glacier grounding line. Our job today was to find the low point in temperature along that line.

By 10am Peter and Emma were off to GMH09 to start the Hotsies in a final effort to assure the glacier melt hole would be ready for use later in the day. The main crew reached the bot garage at 11:10am and began work on the mission plan. By 4pm the Bot was in the water and the glacier melt hole team reported the site was ready for arrival. 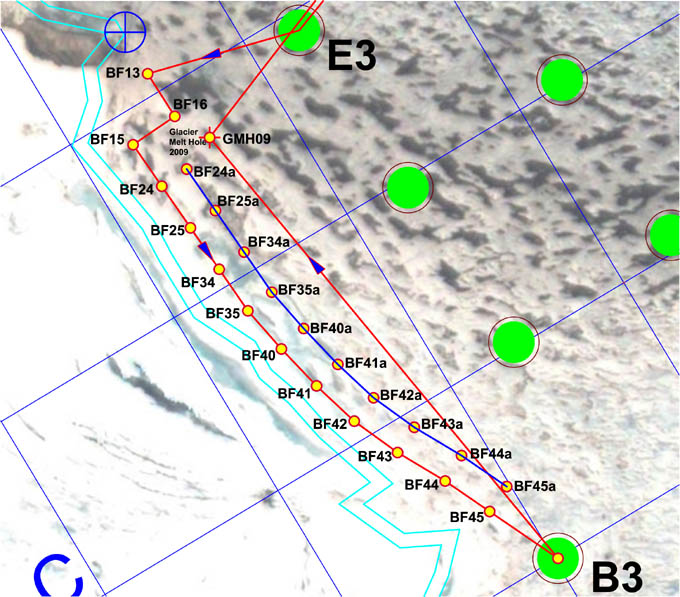 Mission Plan for November 24, 2009. The outbound trajectory goes through waypoint E3 as a tracking check then to the glacier face proximity points BF13, BF15, BF24… BF45. Because the anticipated stand-off distance was less than 10 meters from the glacier we constructed a fall-back trajectory (BF24a … BF45a) in case an unforeseen obstacle appeared. The vehicle periodically swept the forward and westerly (left) pathway with multi-beam to guard against any surprises. The vehicle never had to deviate from the red path, ultimately converging at GMH09 for the first underwater traverse and surfacing at West Lake Bonney.

The mission proceeded smoothly until around 6:39pm, outbound about midway between BF15 and BF45, there was an apparent fiber snag. This was rough terrain under the ice in this location, as we had learned last year. Shilpa momentarily over-rode the mission sequence and caused the bot to dive a few meters (still above the chemocline). This evasive maneuver was enough to free the fiber and we resumed the mission at 6:50pm. At 7:30pm an auxiliary sonde drop mid-way between B3 and BF45a produced the lowest recorded water temperature reading in West Lake Bonney:—5 C (23F) [at UTM N: 1370881.271; E: 435585.644 meters]. The navigation system was performing well. Real-time GPS acquired by Vickie and Bill had shown a horizontal error (including ice picking) of less than 1 meter at E3 on the inbound journey and 0.8 meters at B3 just before the low temperature measurement. 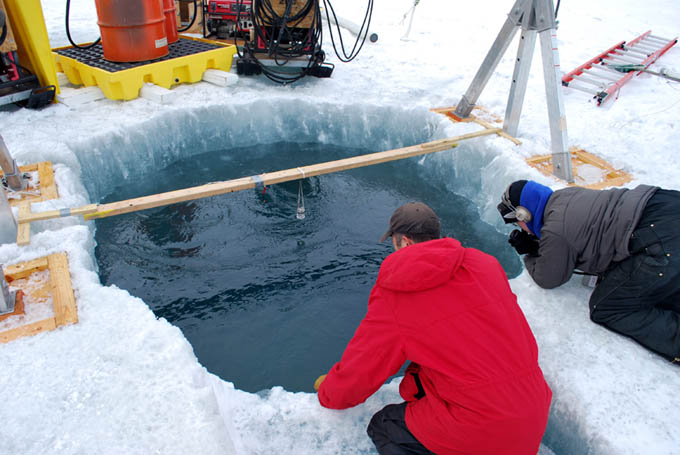 Peter Doran and Vickie Siegel anxiously await the arrival of the bot at GMH09, just 30 meters from the glacier face. The 2×4 across the melt hole supports the collimated alignment beacon. Shimmering on the water surface is from thruster centering action of the bot as it rises up through the 4 meter thick ice cap.

At 8:30pm ENDURANCE completed the first “through-trip” in West Lake Bonney and surfaced at the glacier melt hole, GMH09. By 10pm the bot had completed autonomous recovery back at the lab and the entire crew was enjoying dinner before 11pm, an early night. With the successful completion of the localization and auto-docking and with the melt hole completed we were now ready for the sub-chemocline exploration of Taylor glacier. 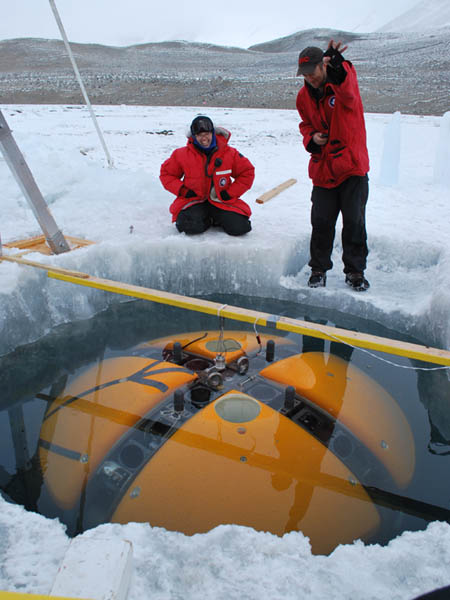 Peter Doran waves hello to the crew back in mission control (the upward looking machine vision camera has a wide field of view and can easily see both Peter and Vickie). 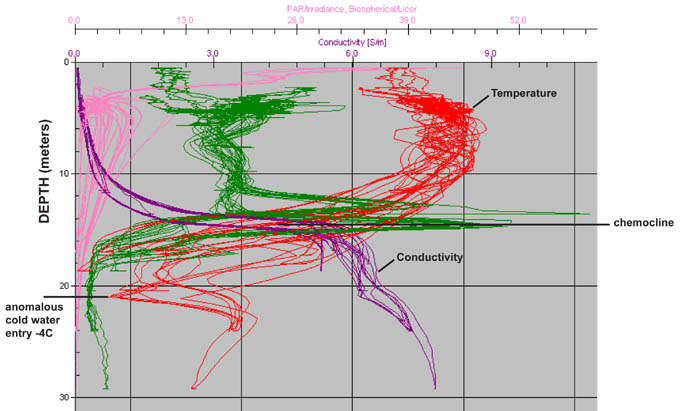 Chemistry profiles from the Sonde instrument package in the refined cast zone near the glacier. These indicate an anomalous cold water source originating somewhere along the glacier line at a depth of 21 meters. Later work would locate an even colder source at -5C near BF45a. 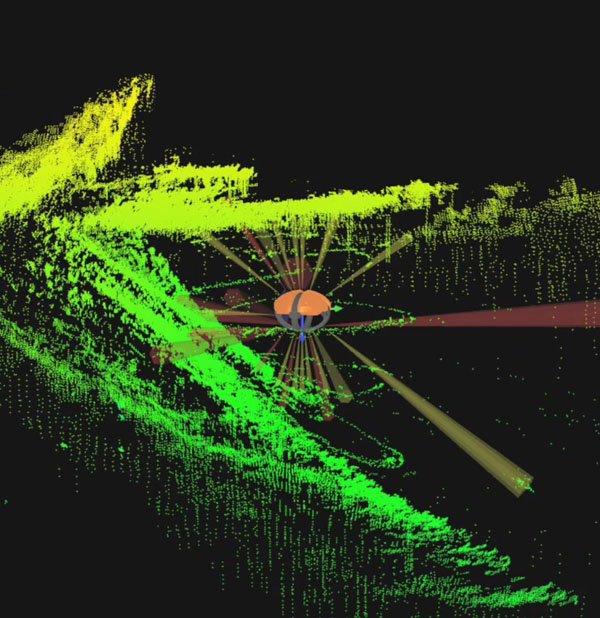 The bot scans the upper face of underwater Taylor glacier at its interface with West Lake Bonney. The lowest green returns to the right show the lip of the glacial under-hang at the chemocline. The next two missions will explore underneath this ledge.