We were up early at 6:20am catching up on data processing and planning for today’s mission under Taylor glacier. The internet remains down and the tops of the surrounding peaks are still obscured in fog and snow. The mission plan (see figure) was conservative, given the absolutely unknown nature of what lies below the chemocline and underneath the glacier. The bets amongst the team as to what the bot would discover ranged far and wide from “a continuation of the vertical glacial interface wall straight to the bottom of the lake” to “a vast sub-glacial tunnel” extending westward under Taylor glacier. 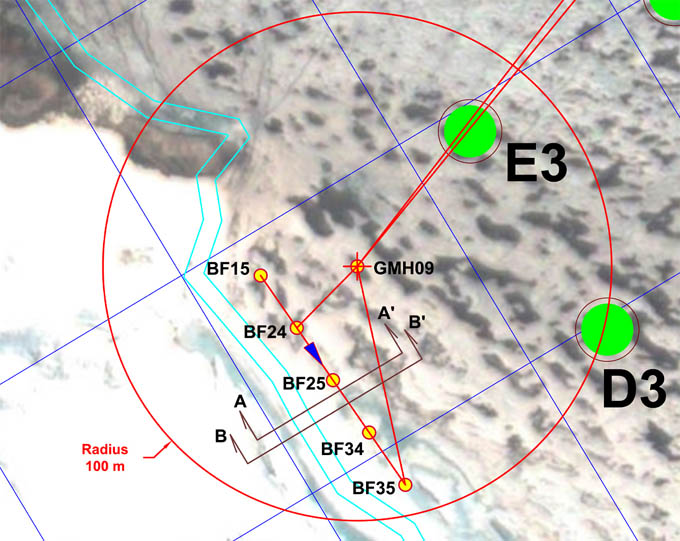 Mission plan called for the bot to surface at GMH09, load up on ballast, then maneuver to pre-points BF15 through BF35 and from there to make tentative perpendicular excursions under the glacier to the west, leaving a straight egress path to the melt hole. The multi-beam data from Sections A-A’ and B-B’ are plotted in the subsequent figures. 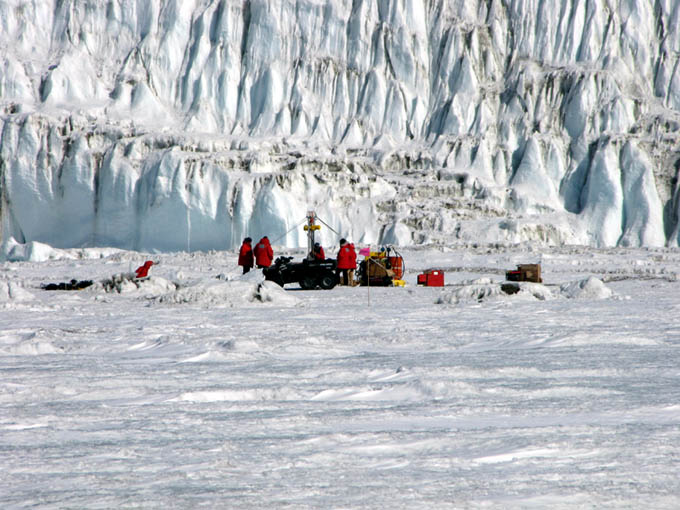 The ice team awaits the arrival of ENDURANCE for re-ballasting for the first sub-chemocline mission. Taylor Glacier forms the backdrop, just 30 meters behind melt hole GMH09.

By 2pm the bot had autonomously surfaced at GMH09 and the crew, led by Vickie, went to work adding a series of ballast test loads to the vehicle to confirm the previous calibration done at the bot garage melt hole several days earlier. The first measurements suggested that there was a problem—the bot was sinking further than it did at the main melt hole. We therefore set about running another calibration run since it was certain that the bot was going to have to be ballasted to a precise depth once we got the first multi-beam data that showed where the best approach depth would be to get under the glacier. Within the chemocline we had limited vertical excursion capability. Even at full upward or downward thrust we would be limited to about a 6 meter rise or descent, all the while potentially stirring up bottom sediments. So the concept was to precisely ballast at the depth of interest and set the bot free for horizontal exploration. Here are the data we acquired today: 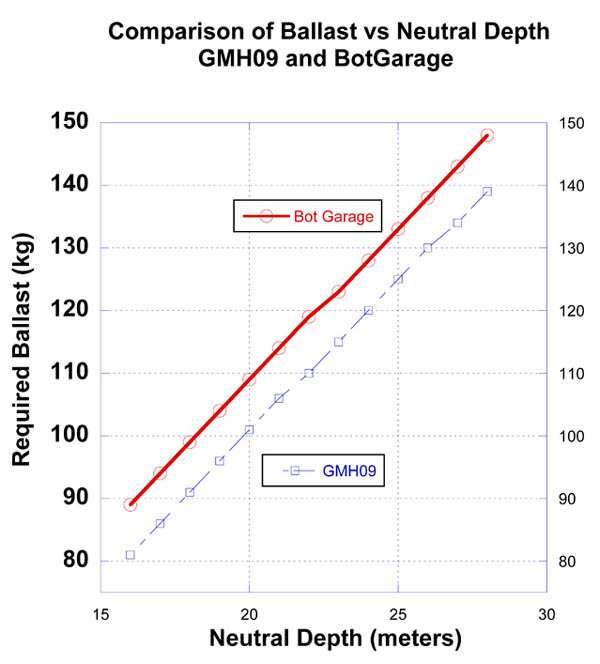 New ballasting data acquired today at GMH09 showed a striking offset from the data originally gathered at the bot garage melt hole several days earlier. The consensus is that fresh water entering from underneath the glacier is locally mixing and slightly reducing the salt content of the chemocline at this locality.

We finally ballasted at 105 kg of additional lead, which took us to a neutral depth of 21.2 meters. With all systems go the melt hole team radioed back to mission control that the bot was free and descending into the chemocline and they began a close approach to the original BF15—BF35 line (see mission plan). Because of the bot’s depth (at 21.2m) and the rising moraines to the north and south we were unable to reach BF15 without violating the ENDURANCE under-keep minimum depth. The deepest lake bottom depth recorded in this zone was 27 meters, so there was not a lot of maneuvering room. For the same reason we were unable to reach BF35. But, within that line we were able to sweep the face of Taylor glacier to the bottom with clean line of sight. 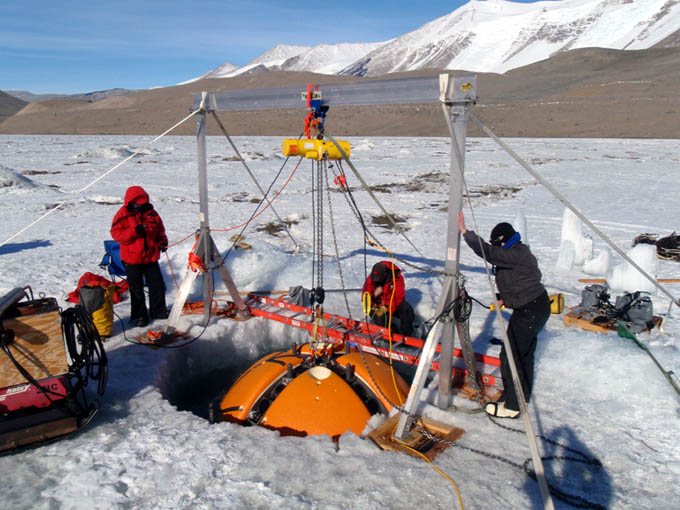 Getting down to the business of negatively ballasting the bot. The overhead 1-ton gantry is just barely strong enough to get the vehicle 2/3 out of the water—but high enough to add the additional 105 kilograms of lead to sink the vehicle to 21.2 meters depth, 7 meters below the chemocline layer.

ENDURANCE moved up close to the nose of the glacier at BF24 to try to get images of the grounding line. However, we were ballasted too heavy and the down-look cameras on the Sonde showed that we were beginning to stir up lake bottom sediment with the vertical thrusters attempting to maintain minimum standoff under-keep clearance so a retreat was ordered. We then cautiously moved southeast and again moved in close to the glacier about midway between BF25 and BF34, and midway between B34 and B35. The further southeast we went the shallower the lake floor / moraine deposit became. Based on this data it seemed clear that the ideal ballasting depth would be about 19.2 meters, and we made a note of that for tomorrow’s closer proximity explorations.

The bot’s multi-beam imager brought back a treasure trove of clean 3D map data (see Section figures A-A’ and B-B’ for a sample of some 2 meter slices of the data taken between BF25 and BF34). Unfortunately for those who had wagered on the presence of a vast sub-glacial cavern, there was no borehole leading off into the unknown. But there was plenty to be investigated further once we had the right neutral approach depth to minimize disturbance of the grounding line sediment. We auto-docked back to the melt hole around 9pm, removed the excess ballast, released the bot and it returned home for a second autonomous docking and ascent at a mission clock time of 7 hours and 26 minutes underwater. It had been a good day. We had pulled off a dangerous exploration mission and did not lose the bot. Tomorrow we will return for close-in visual imaging. 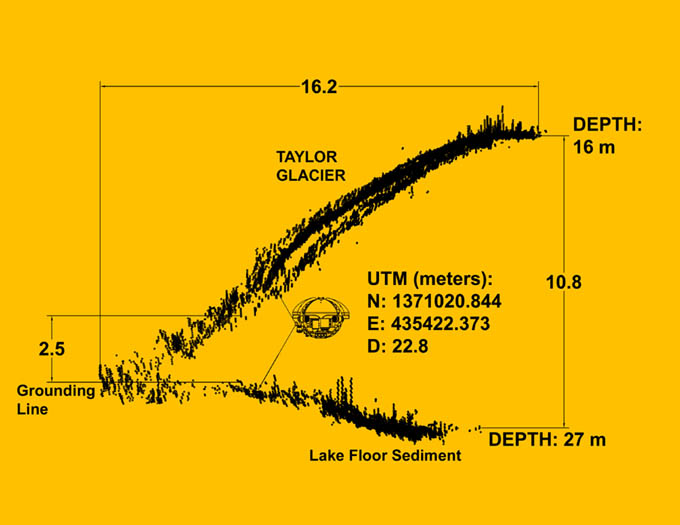 Section A-A’ (see mission plan above) shows a multi-beam 2-meter-thick slice of the underside of Taylor glacier, below the chemocline. Above 16m depth (to the right) the glacier face rises above the chemocline to the Lake Bonney ice sheet roof. Generally there is a concave cusp above this level (see the multi-beam image for November 26 that shows this well). The “grounding line” is where the glacier ice mass rests in contact with the moraine sediments. It is along this line that the anomalous cold water source localized yesterday is presumed to originate. 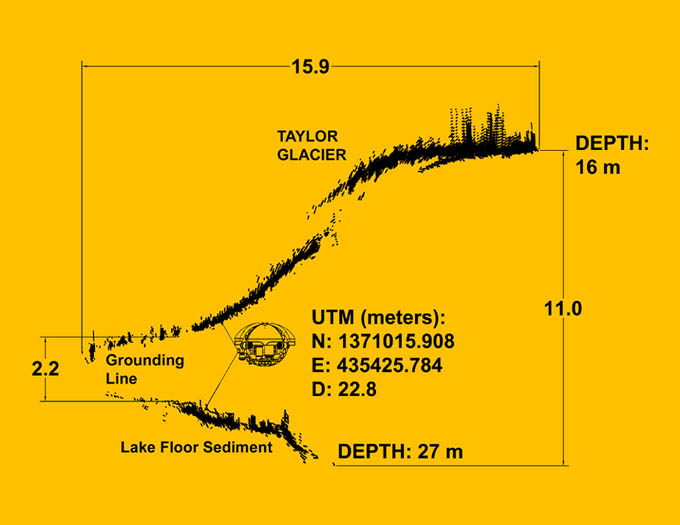 Section B-B’. Similar to the previous section but further south along the glacier face. ENDURANCE had a hard obstacle standoff limit of 1 meter of overhead space and 2 meters under keel for maintenance of navigation and image sensor reliability. The vehicle cross section is to scale and is located at the actual closest point of approach to the grounding line in this location.