Mission Objective: Investigate in greater detail the grounding line voids underneath Taylor Glacier and below the chemocline. Pending the early conclusion of the first mission, generate a second mission plan on the fly and run an autonomous shore bathymetry scan of the southwest quadrant of West Lake Bonney.

The crew was up at 7:20am and off to the lab by ATV at 9:15am. Kristof and Bill worked the 3D glacier geometry data from yesterday’s scans to select a target point for the start of today’s close-in glacier contact imaging. By 1:50pm the bot was in the water and on its way to GMH09. New ballast calculations performed by Chris and Bill using yesterday’s test data, combined with the geometry data from yesterday, indicated we would need to re-ballast to 85 kg negative at the surface to be neutral at 18 meters below the glacier lip at the chemocline. By 3pm the bot was at GMH09 and the trim weights were added and the vehicle released. 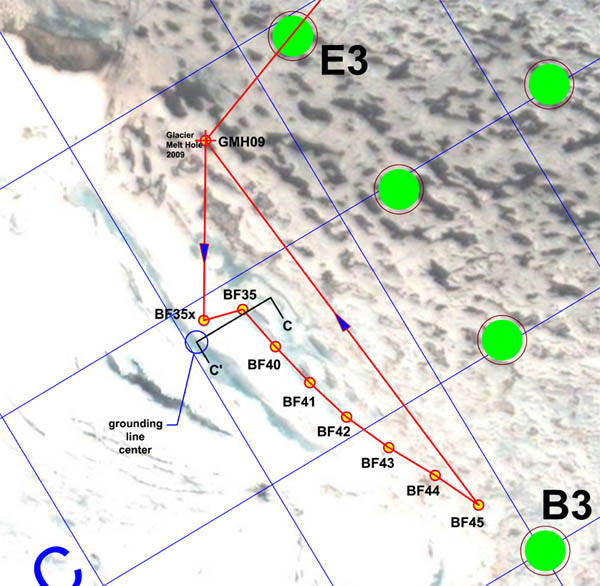 The first portion of the November 26 mission involved close-in exploration of the underside of Taylor Glacier, in an effort to locate the grounding line between the glacier and the lake sediment. The bot was re-ballasted to 85 kg negative at the surface at GMH09 and released to approach the underside of the glacier. The furthest penetration of the imaging sonar underneath the glacier occurred just south of BF35 at Section C-C’ and showed a 30 meter deep overhung recess.

At 4pm the bot discovered a cave going back under the glacier just south of BF35 for more than 30 meters (see Section C-C’ figure). It was too small to drive into, unfortunately. Similar investigations south towards BF45 indicated closure between the lake floor sediments and the underside of the glacier at less than 30 meters west of the main overhang at the chemocline, so it was apparent that no sub-glacial borehole existed. The multi-beam data from today and yesterday produced high-resolution imagery back to the grounding line across the entire central portion of the glacier (between the north and south moraines). 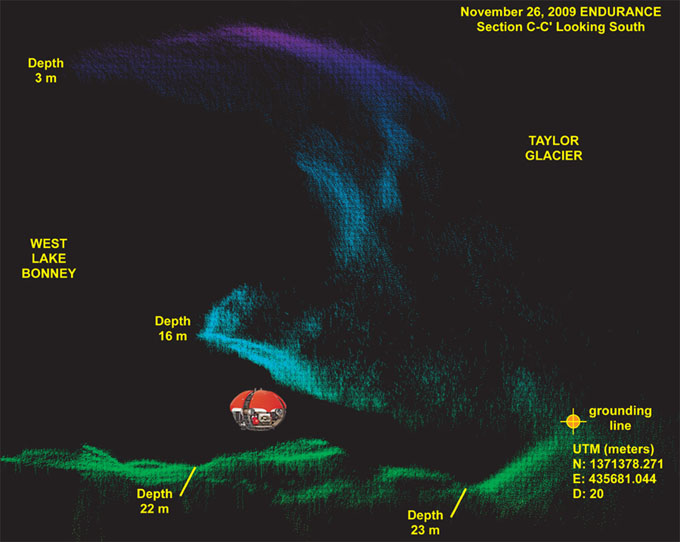 This is a plot of a 10 meter thick imaging slice of Taylor Glacier, looking south, taken along Section C-C’ (see the mission plot). East is to the left; west to the right. It clearly shows the grounding line beneath Taylor Glacier (which shows up mainly as blue and purple in this depth-cued plot). The lakebed and moraine sediments show up as green. The vehicle is shown to scale at the point of closest approach west of BF35. This figure also shows the presence of a concave ledge in the glacier face just above the chemocline (which starts at approximately 14 meters depth). This is typical along the central portion of the underwater glacier. 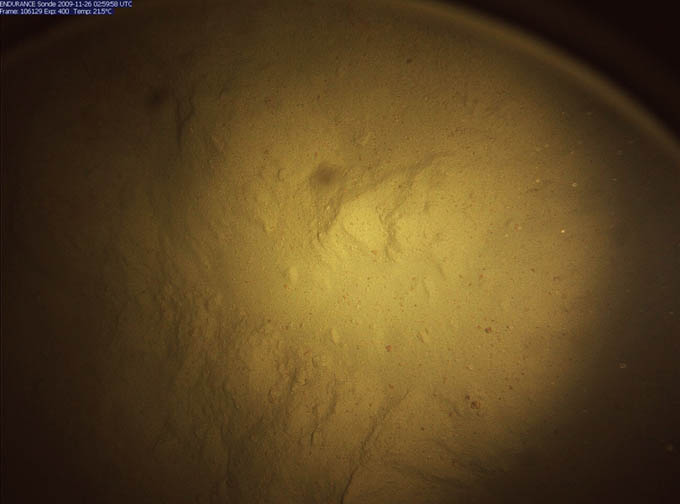 This high-resolution image of the moraine lake bottom sediment was taken by the Sonde down-look camera during an auxiliary cast of opportunity at BF35x. 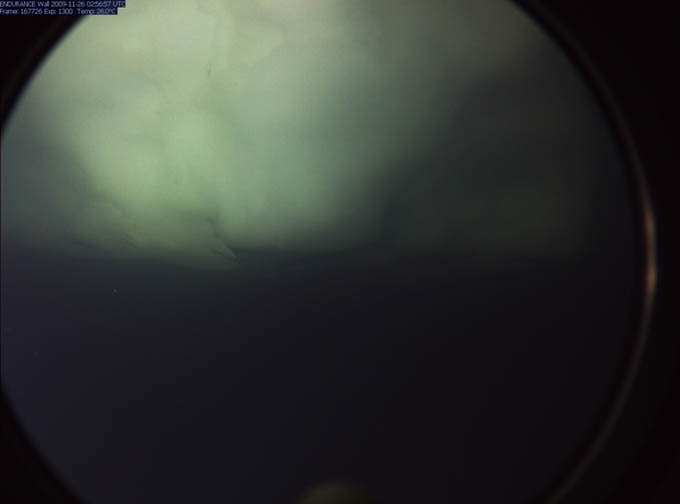 This is a close-up view—taken by the forward imaging camera—of the overhang beneath the glacier at a depth of -16 meters along Section C-C’. The overhang continues for 30 meters to the west before the lake floor sediments rise to meet the ice at the grounding line.

By 5:50pm the bot was back to GMH09 and the sub-chemocline ballast was removed for the final time. Given that fiber snag problems had occurred several times this year in the vicinity of B3 we plotted an evasive trajectory back to E5 before heading to the southwest shoreline for bathymetry scanning. By 6:10pm the new mission code was uplinked to the vehicle while it was enroute to E5. At 6:12pm the bot went fully autonomous for the remaining 3 hours of the mission. The standoff range was 80 meters from shore. The bathymetric scan proceeded rapidly and smoothly with complete coverage to the grounding line between the West Lake Bonney ice cap and the lake floor. The coverage was high definition with 4 multi-beam scans per second (480 measurements per scan) and the vehicle running at 0.29 meters/s. At 8pm the vehicle turned the corner at BA3 (see secondary mission plan figure) and headed towards home. We were receiving much more detail of the lake bottom than anticipated considering the side-look orientation of the imaging sonar. At 8:30pm the vehicle crossed within range of the LTER limnological test site and captured a complete 3D map of the location of all of the suspended cables there (see figures). Considering that most of those cables were only 6 mm in diameter this was an impressive confirmation of the obstacle detection system. At 8:30pm the bot autonomously located the melt hole and rose to a cheering crowd. We were packed up and headed home with another load of data at 10:30pm. 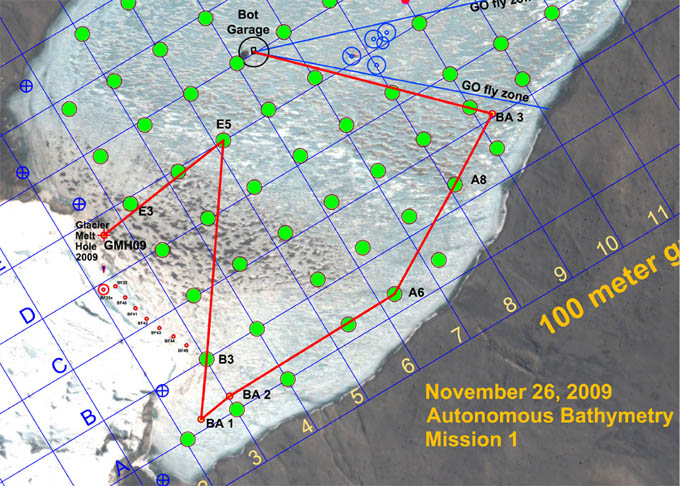 Bathymetry Mission 1 was uploaded to the vehicle while it was traveling enroute to E5 from GMH09. The bot went fully autonomous at 6:12 pm and conducted a scan of the southwest shore of West Lake Bonney, returning on its own to the main lab melt hole at 8:30pm.

Results of the lateral bathymetry scan, plotted at a decimation factor of 100 (that is, only 1 point in 100 of the actual data is plotted here to show typical patterns of coverage). The system acquired good bathymetry (lake bottom topography) data all the way out to the grounding line between the lake ice sheet underside and the lake bottom. Ice thickness remained approximately 3 meters all the way to shore. 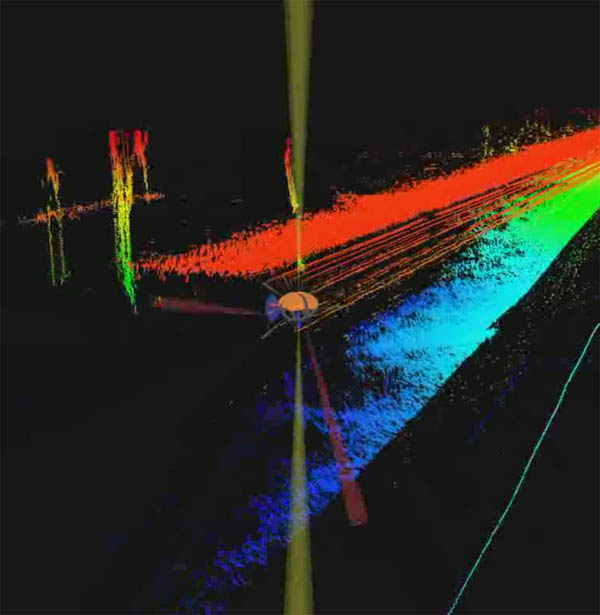 Frame capture from the situational awareness 3D visualizer shows that the bot cleanly imaged the locations for the existing permanent NSF LTER experiments (to the left of the vehicle track) located at the center of West Lake Bonney. The largest cluster is in fact a group of four 6 mm cables that suspend a series of sediment traps, used to monitor materials that may seasonally enter the lake, either through the ice cap through ablation and melting or from glacial melt coming in from the end of the lake and flowing atop the chemocline.