Mission Objective: complete the final section of lake edge scanning with an autonomous, fiber-disconnected mission (we will retain the physical fiber tether but the link will be broken at the bot house). Subsequently, perform several autonomous sonde casts at F6 to test new code that has been developed since the November 21 and 23 instrument pod grounding incidents; then a calibration of the sonde encoder.

The crew was up and eating breakfast at the Jamesway by 7:30am. A full team meeting was held at 9am to plan out the final 2009 missions. Most of these focused on the completion of the lake bathymetry and a notable re-run of the Bonney Riegel narrows mission—not because of data error but in order to gain a second, temporal, data set that would show how the chemistry measurements changed at the shallow sill separating East from West Lake Bonney (WLB) as a result of the now increasing melt runoff from Taylor glacier. The team agreed to the following remaining missions: 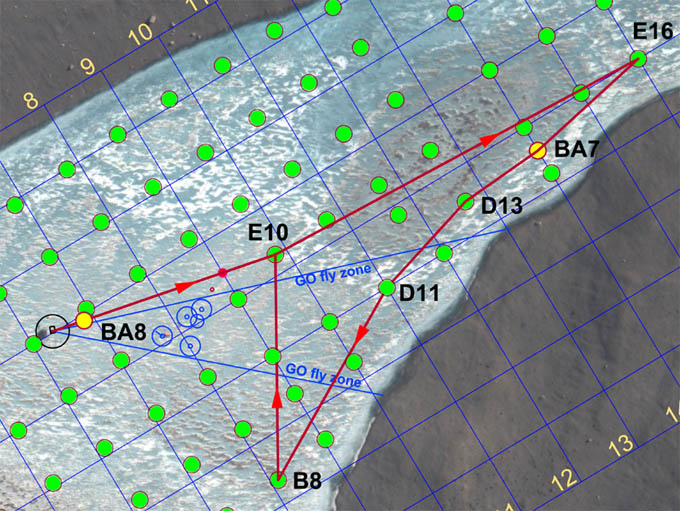 The mission plan for November 29th, 2009 was fairly straight forward—a bathymetric side-look scanning run at 80 meters standoff range down the southeast edge of the lake to stitch together the previous two lake edge scans. But it involved moving through the limnological LTER zone. For security we left the data fiber attached to the vehicle (but not connected to mission control), so we again used the pivot point (tube) west of E10 to ward the fiber away from the limno cables.

The entire crew was on the way to the Bot Garage at 9:45am. By 12:30pm the mission was underway and ice-picking positive buoyancy checks At 12:35pm Vickie disconnected the data fiber. The bot was on its own. In order to keep some measure of what was happening Kristof and Bill proceeded to follow the vehicle using the thru-ice tracking system. They proceeded directly to the E16 sonde cast location (using GPS to re-locate it since the flags had already been retrieved after the surface fix was achieved). The vehicle proceeded smoothly down the southeast shore to B8, which was well behind the prior limno “no fly” zone. We were again using the PVC pivot tube (small red circle about 140 meters southwest of E10—see mission plan figure). All proceeded according to the program and at 3:30pm the vehicle returned to the melt hole with sub-meter navigation error. 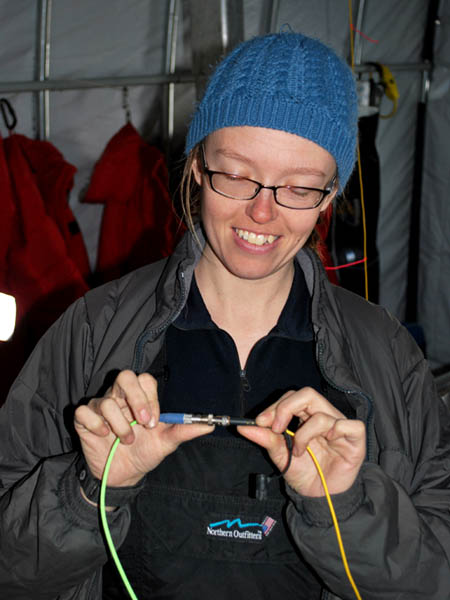 Vickie prepares to free the bot. 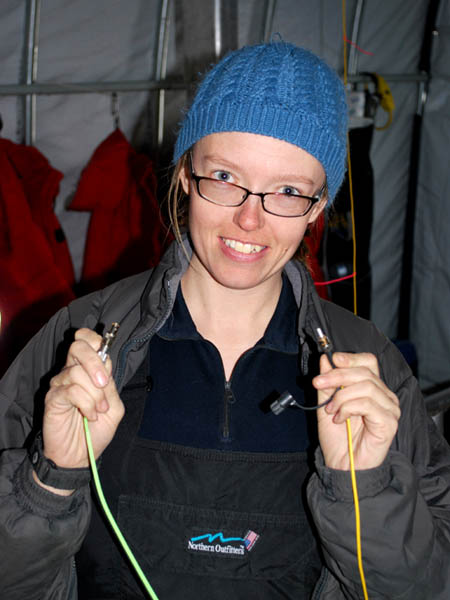 The deed is done and ENDURANCE is running fully autonomously, without supervision from mission control. 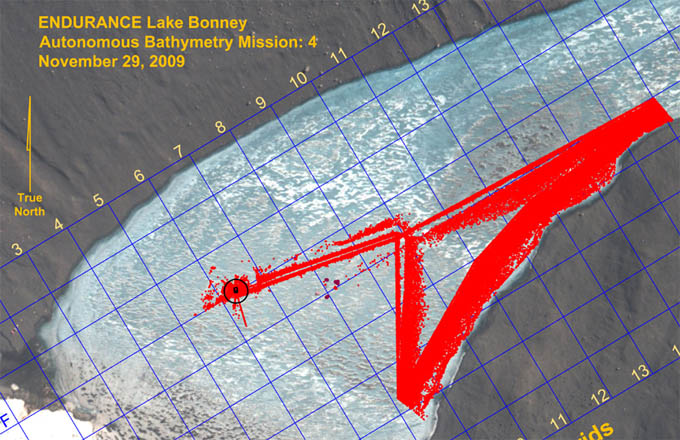 Results of the November 29th lake edge bathymetry mission. Only 1/100th of the points acquired are plotted here.

Chris subsequently ran a few automated sonde casts at F6 to test new code that integrated several auxiliary sonar systems to augment the altimeter on the Sonde instrument pod. The remainder of the time until 8pm was used to calibrate the Sonde depth sensor. Kristof and Shilpa read off the precise descent distance (using a metric fiberglass tape) while Chris stepped the Sonde downward via software commands. Bill recorded the encoder ticks and the pressure sensor readings. With these entered into a spreadsheet we were able to develop a very accurate compensation system with which the Sonde altimeter readings, and those of alternative sonar soundings from other instruments, could be correlated. We planned to test this new concept following the December 3 mission. 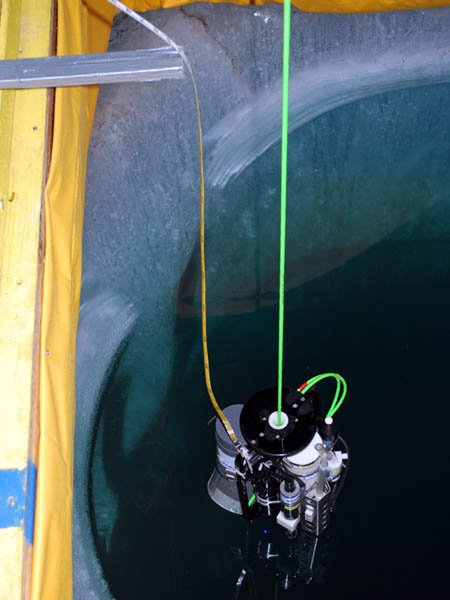 With the bot suspended out of the water, the Sonde pod is lowered to lake bottom with a metric tape trailing behind. This external reference provided an absolute scale against which to calibrate several onboard sensors including the drum encoder for the spooler, the pressure sensors on the Sonde, and the down-look altimeter on the Sonde. These would later be fused in a new filter for enhanced autonomous bathymetry tests.

The planning for the next few day’s bathymetry missions meant post-processing all of the prior data (scores of gigabytes, including that from 2008), importing those into the mission planner, and then developing paths to assure we had as close to 100% lake bottom and ice cap topography as possible. Chris wrote code to decimate the bathymetry data while Bill did the mission planning. Both were up past 3am.