To our delight, a large, irregularly shaped chunk of ice was floating on the surface of the melt hole this morning—the trombone melter had cut off the large flake Vickie had seen underwater yesterday. Removing this 1 meter long by half meter tall by 10 centimeter thick chunk of ice was a little tricky. We ended up screwing an ice screw into each end and lifting it out of the hole with the bot hoist.

This chunk of ice is all that remains of a large lump that was one of our problem spots around the bottom of the melt hole. We were able to saw it off with a trombone melter over night and it floated to the surface. 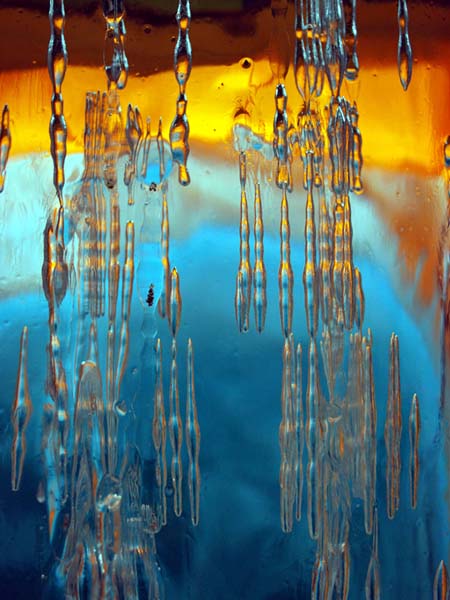 A close-up view of the ice chunk we sawed off, showing the elongated air bubbles that are present in most of the lake ice.

Once the rest of the morning ice crust had been broken up and hauled out of the hole, Rachel did some final adjustments with the syntactic mounts, Shilpa, Kristof, and Chris started going through the daily pre-dive procedures, and Bill and Vickie went out to get GPS coordinates of the Bot House for the programmers to use for the vehicle’s navigation. At some point in the middle of all this a helo landed and delivered our new, 2000 meter-long fiber optic cable.

A technician from McMurdo tests our new 2 kilometer long fiber optic cable. We will use this longer line for our missions to the far east end of the lake.

Our morning tasks completed, we regrouped after lunch and worked together to put the bot in the water and work on the ballast. Like last year, it was difficult to nail down how much lead we need to put on to achieve neutral buoyancy because of the microbubbles that form on the robot’s surfaces (see last year’s blog entry on microbubbles). Eventually we got it narrowed down and left the fine tuning for tomorrow.