The team was up at 9am (less than 6 hours sleep for Chris and Bill) and back at the mission planning task. At 10am Kristof delivered decimated data sets for the Narrows and the southwest quadrant shore scans. These were imported into the mission planner and work continued until 2pm. Bathymetry Mission 4 was a complicated, “gerrymandered” trajectory designed to accomplish the dual tasks of filling in the gaps in the 2008 bathymetry data in the northwest quadrant and, as well, to acquire data that would be used to calibrate local yaw, pitch, and roll for various critical mapping instruments. The main multi-beam imaging system was moved from its forward-looking mapping and obstacle avoidance position to a down look orientation for swath bathymetry mapping. 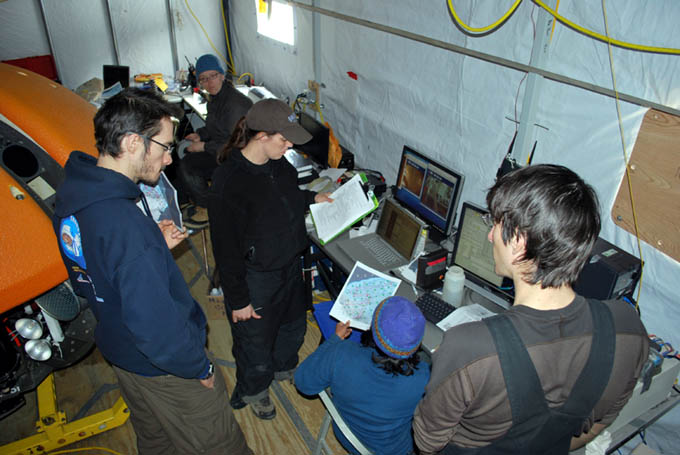 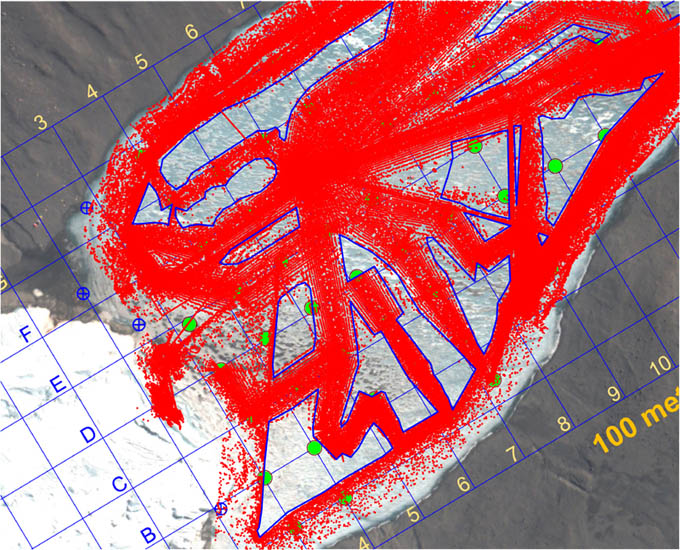 Prior to November 30, 2009 this was the plan extent of the bathymetry that has been acquired for West Lake Bonney and represents a composite of all 2008 and 2009 missions to date that collected bottom topography information. The blue polygon-enclosed areas represent gaps in the data set. Our goal was to fill these in to the maximum extent and leave no gap greater than 25 meters. 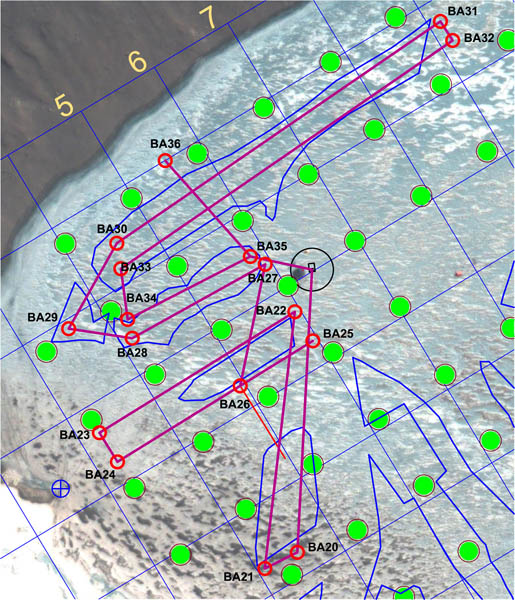 The gerrymandered mission of November 30 was meant to sweep out all of the blue polygon gap areas shown and, as well, to conduct calibration tests that would acquire data needed to align the critical mapping sensors in yaw, pitch, and roll relative to the vehicle coordinate system. The “patch” test used segments BA22-BA23 and BA24-BA25; the “crossing” test used segment BA35-BA36 in conjunction with BA30-BA31 and BA32-BA33.

By 2:40pm the bot was down hole and on its way. As soon as it cleared the positive buoyancy test Vickie disconnected the fiber and the next fully autonomous mission was underway. Kristof took a turn out on the ice with tracking the bot in real-time. Five hours later, having run the maze-like mission, the bot found the melt hole, locked onto the light beam and surfaced on its own. The entire mission had proceeded flawlessly with a run time of 3.8 hours underwater (4.8 hours total in-water mission time). The total underwater traverse was 3,481 meters. We had, using the mission planner, conservatively predicted 27% power reserves at this point; the actual reserve was 35% at surfacing. 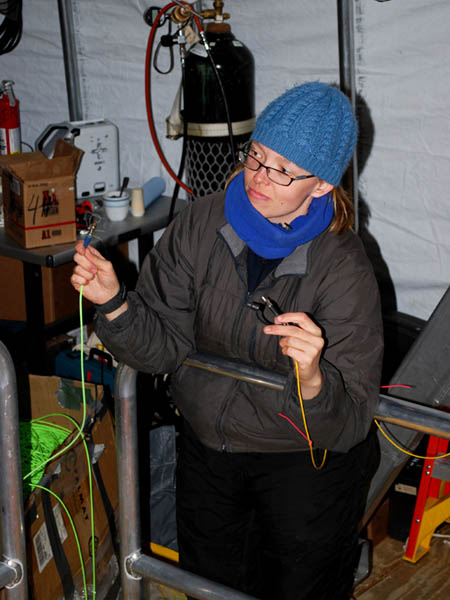 Vickie breaks the data link to the vehicle for the second day in a row. From this point forward the vehicle was fully autonomous.

Given that we still had substantial power remaining, the vehicle was re-ballasted for neutral running at 5 meters and sent to station F6. A series of cast tests were conducted there (fully automated drops) using a simple control filter comprised of the Profiler encoder, the Sonde altimeter, and the Doppler vertical ranging. We will later include the following additional auxiliary sensed data to the control filter: bot depth sensors (meters); sonde depth sensor (meters); nadir obstacle avoidance sonar (meters to bottom); and central multi-beam range (meters to bottom).

At 8:54pm the bot returned to the melt hole, locked onto the guidance light beam and rose up the hole. The bathymetry data were downloaded and subsequently plotted later in the evening. These revealed some curious behavior in the data. In the central portion of the lake we obtained nearly 100% of the intended topographic fill content we were seeking. However, in the shallows along the northwest shore the acoustic reflectance characteristics of the lake bottom were significantly different, and the valid range returns from the multi-beam comprised a narrower swath than was originally expected. The instrument in question had software selectable range gating and signal gain adjustments, but these are frequently sensitive and too much gain, which would have led to a wider return swath, would have resulted in noisier, less accurate measurements unless the range gates were appropriately set. This process, currently, is something best done by a human while observing the data feedback. It would have been caught immediately had this been a human-supervised autonomous mission, as we had until now been running. It pointed to the limitations of a robotic system in a purely autonomous setting. Silicon intelligence only responds to that which it is programmed to perceive plus a few simple behaviors driven by direct sensed and derivative data. 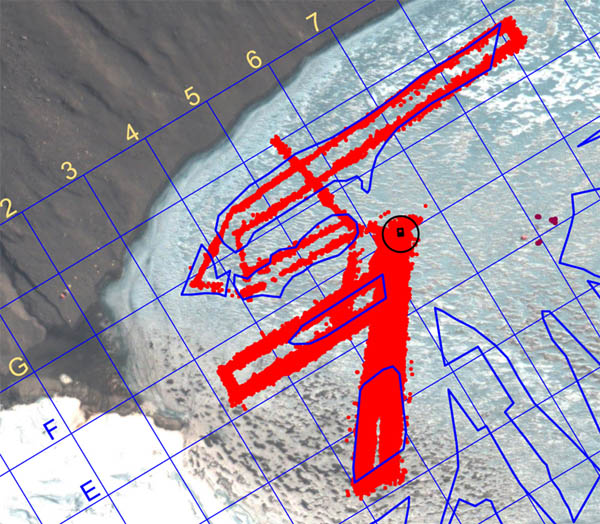 Bathymetry fill results from the November 30 fully autonomous mission. Nearly complete fill was achieved at the center of the lake; less coverage (but still acceptable) was obtained in the shallows towards the northwest shore, largely because of a reduction in the acoustic reflectance of the material in that area. 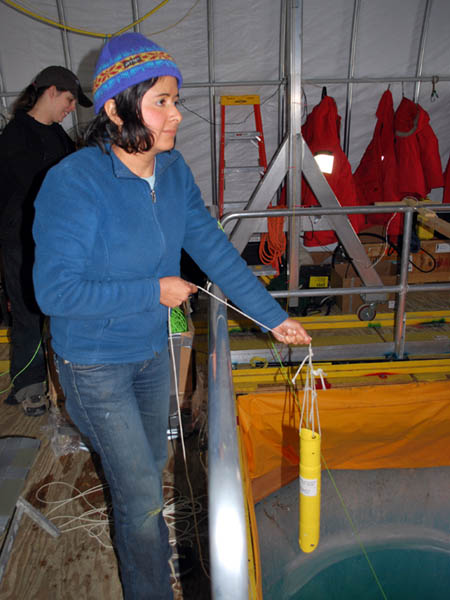 Shilpa retrieves the iUSBL transponder prior to arrival of the bot. Since the data fiber was disconnected, we tracked the bot position using the through-ice emergency beacon. Kristof, who was on duty, radioed the message to Shilpa who pulled the beacon just as the bot arrived under the melt hole.

Returning home, image 1 of 3: the bot crosses the melt hole at a depth of 5 meters. 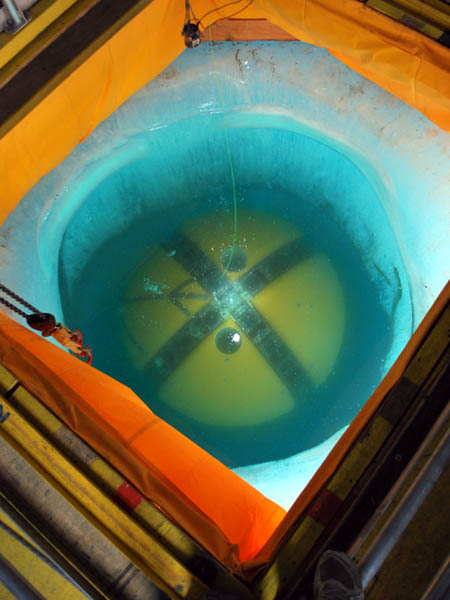 Returning home, image 2 of 3: the bot locks onto the central guide light beam. 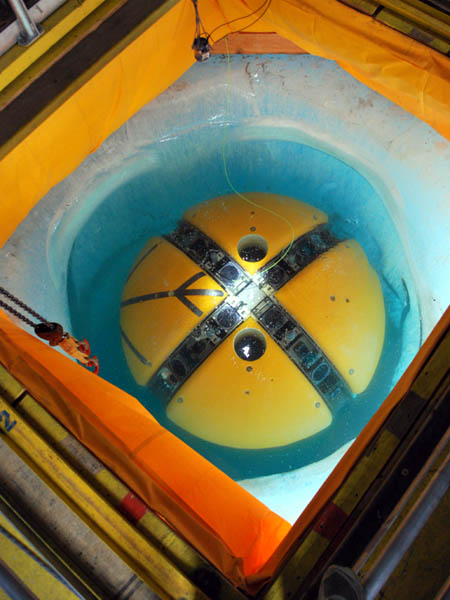 Returning home, image 3 of 3: the bot surfaces, still locked onto the central beam.