Today we tested the obstacle avoidance system. This year we have the high resolution Delta T sonar pointing forward for our sonde drop missions to identify objects, such as other science projects, hanging in the lake that may snag our fiber optic link to the bot. This is a change from last year, where had the Delta T facing down to map the lake bottom, so we wanted to see just what kind of objects the Delta T could resolve. Below are some of the results from our tests.

In this augmented reality visualization (part of the newly developed “situational awareness” system for ENDURANCE) the forward looking multi-beam sonar is swept under the ice cap at West Lake Bonney in the vicinity of the melt hole. We lowered three test “obstacles”—a steel ice chipper bar on a 10mm diameter rope; a 50 mm diameter pvc pipe; and a sack of lead weights on a 10mm diameter rope. At 15m radius we were easily able to detect them. The overhead red points are reflections off the underside of the ice cap. Interestingly, we also got returns from the surface of the super-saline chemocline at -14m depth (the yellow vertical lines near the bottom). 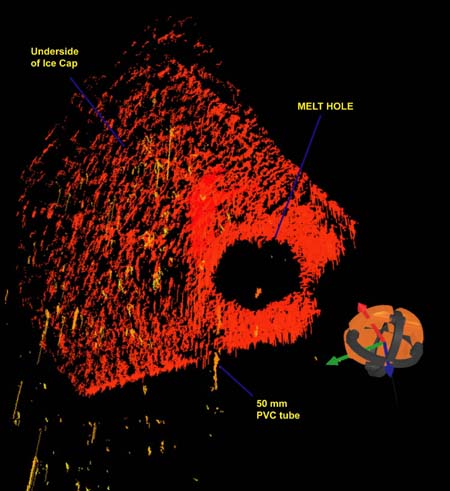 In this oblique image of the underside of the ice the bot is about 7 meters east of the melt hole—the underside edge of which can be clearly seen along with a long yellow vertical line on its west edge. This yellow stripe is the sonar return signature from a 50 mm diameter pvc tube that we lowered to a depth of 5 meters below the melt hole—so ENDURANCE is also able to detect plastic materials. 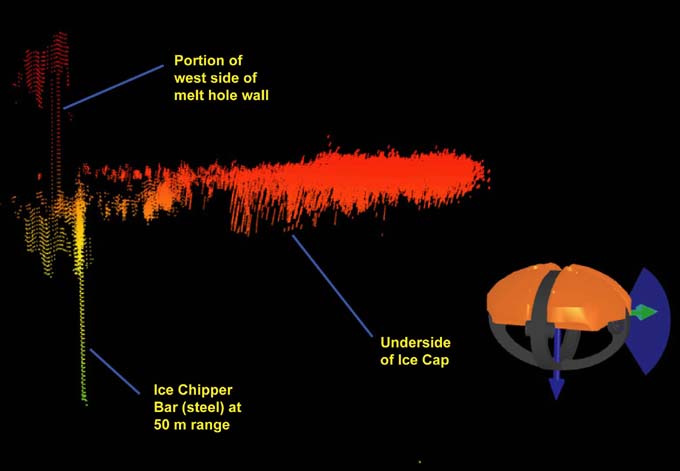 In this final test of the obstacle avoidance and detection system for ENDURANCE we maneuvered the vehicle to 50m radius and 7 meters depth. We removed all obstacles but the steel ice chipper bar (to simulate cables) and the vehicle was able to clearly detect it, along with the western side of the melt hole (the beam pattern from the vehicle was able to “illuminate” the back side of the hole and hence obtain ranges which show up as red vertical lines to the left of the image). The chipper bar shows up as the bright yellow vertical line projecting below the ice cap at the left of the image.