The morning started off auspiciously enough with bright sun and no wind. We had the bot in the water by 11:30am (getting the pre-dive checklist and nav system alignment completed in under an hour) and successively drove to the navigation waypoints established yesterday. This time Bill tracked the vehicle using the magnetic beacon while Vickie took a GPS fix as the vehicle reached each waypoint along the course (we knew where the bot was going this time and were waiting for it to arrive at each point). The GPS points (the second set in two days) would be used to verify that the navigation system was working correctly (it was). 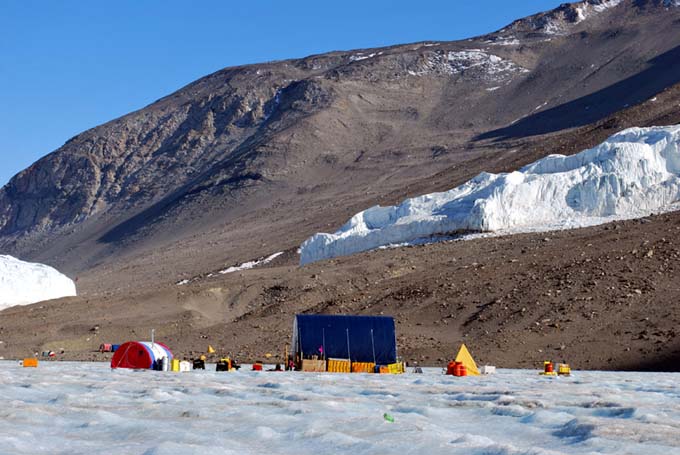 Sunshine and no wind can sometimes make life outside our remote lab seem pleasant. 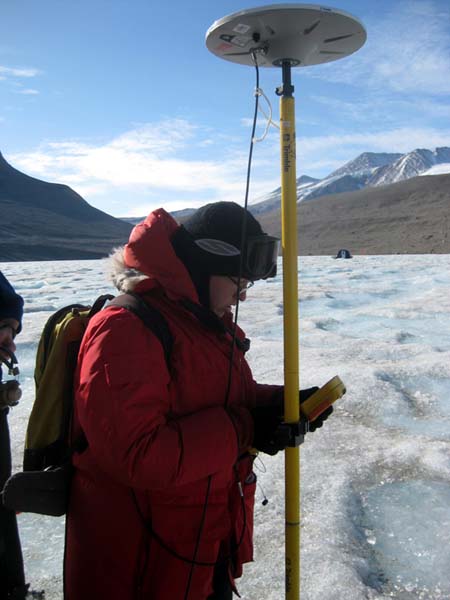 Vickie gears up for GPS tracking of the vehicle at the conclusion of the navigation calibration tests. The differences between the actual locations reached yesterday and the originally targeted locations were used to create an adjustment matrix which compensated for any instrumental scaling and rotation errors. 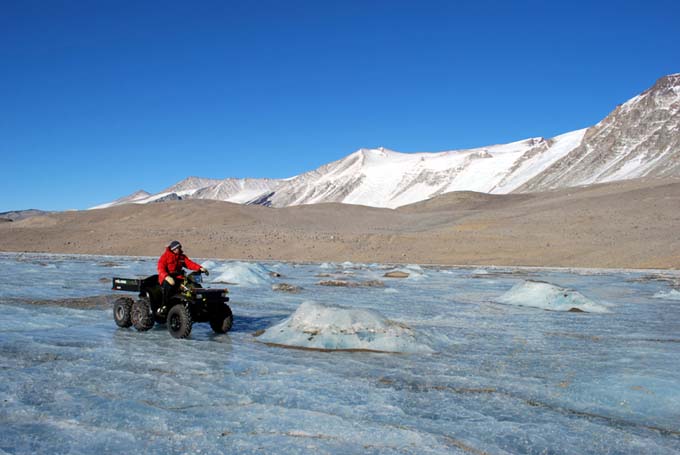 Pressure ridge remnants near Taylor glacier pop up from the ice cap—underneath, we suspect cracks and bulges that snag a data fiber.

When we reached the conclusion of the navigation re-calibration course Emma Steger (our camp manager) met us with a “banana” sled laden with bamboo flags pre-labeled for the upcoming sonde cast mission planned for today. From there we branched southwest to re-target sonde locations achieved in 2008 (each of which was GPS-located in 2008 and these coordinates were then entered into today’s onboard mission so that both year’s data could be geo-registered to the same location). We proceeded swiftly along to points E5, E4, D4, C3, and E3. Before reaching F3 mission control reported a fiber snag somewhere in the loop—probably due to under ice cracks or bulges associated with pressure ridges near the glacier. We then began a series of lengthy evasive maneuvers ending with a return to C3, then to D4, then back to F3, successfully. By this time, having started with only 80% charge on the batteries and having maneuvered an additional 500+ meters we were beginning to run low on power and decided to return home, stopping at F4, F5, and F6 on the way. We got the sonde drop at F4 but as the vehicle was slowing down at F5 all communications went dead. All attempts to resurrect it electronically failed so we resorted to reeling it in—slowly—using the data fiber. The vehicle is designed for “ice picking”, using rounded posts for contacting the underside of the ice sheet, so it has very low friction resistance to horizontal motion. Provided we encountered no further ice cracks or bulges recovery using the data fiber is straight forward, but slow… about 5 to 10 meters per minute. 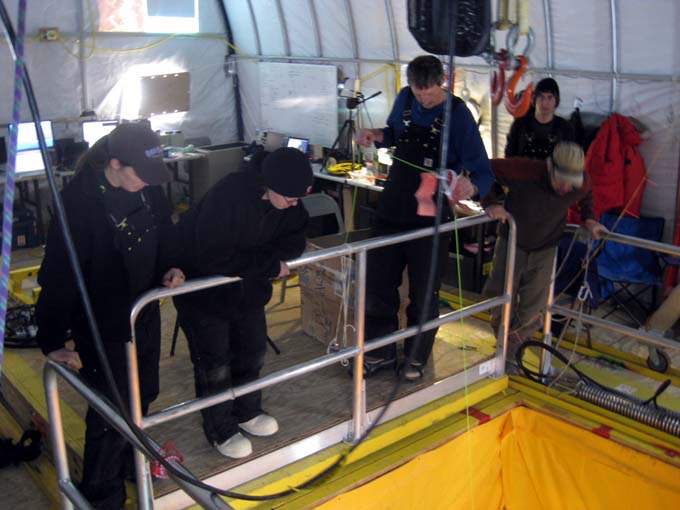 Following a non-recoverable communications link failure to the bot the team slowly retrieves it by tugging on the data fiber. 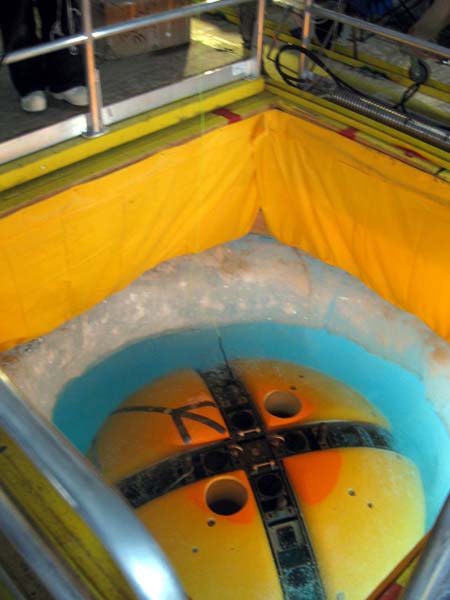 With the vehicle back we began a post-mortem and discovered that the redundant batteries had both tripped around 20% power reserve. An analysis of the time-domain response of the voltages, however, showed the cause: we had been moving at high speed (twice that of last year) and the sudden stopping to acquire a sonde cast caused a current spike to the thrusters which depressed the battery voltage… enough that one cell in each of the large lithium stacks went below its safety threshold and the auto-disconnect kicked in. By 11pm we had diagnosed the problem and had developed a plan for resolving it. By 12:30am we were packed up and ready to head home… and into an approaching snow storm. 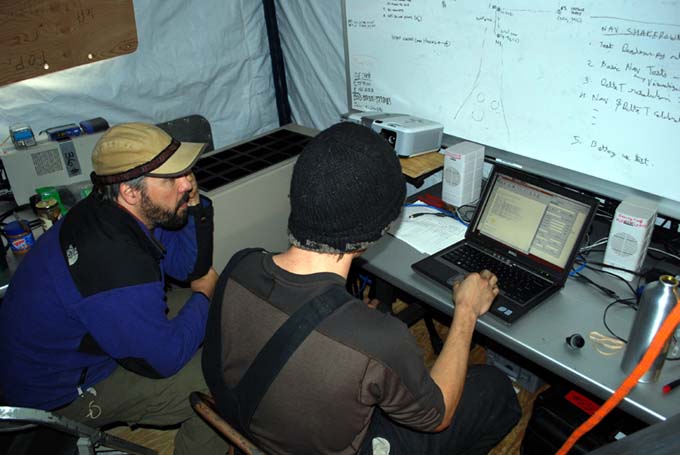 Chris and Bart ponder the power-time history of the mission, looking for clues.

As if the stars were completely mis-aligned this day, the Hotsy melter system—which we had to run in the melt hole each night in order to keep the hole from re-freezing—died, and another hour was spent in the cold. Post-mission discussions lasted till 3:30am. It was a long day in Antarctica. 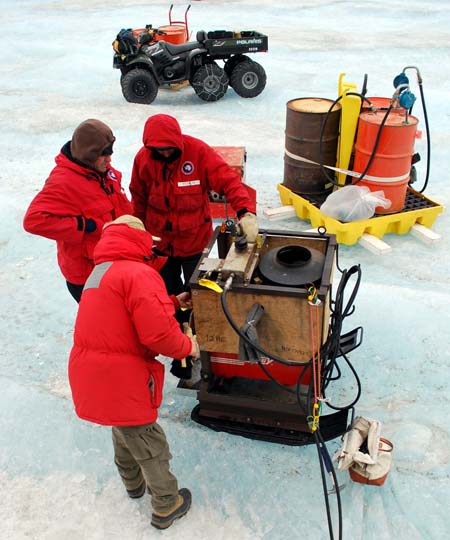 Bart, Maciej, and John Priscu work on the dead Hotsy. Repairing equipment in the field is the nature of work in Antarctica. 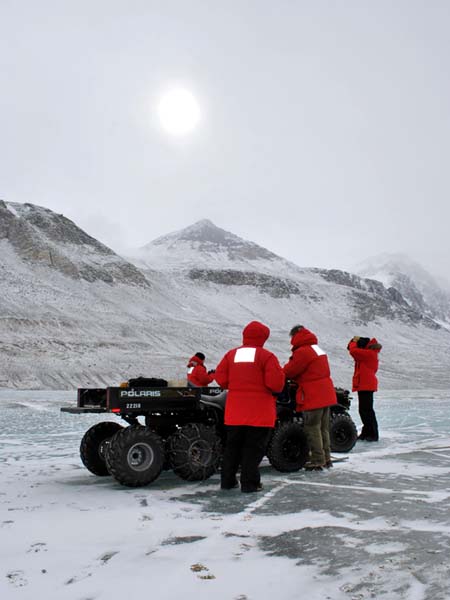 And then the storm hit… 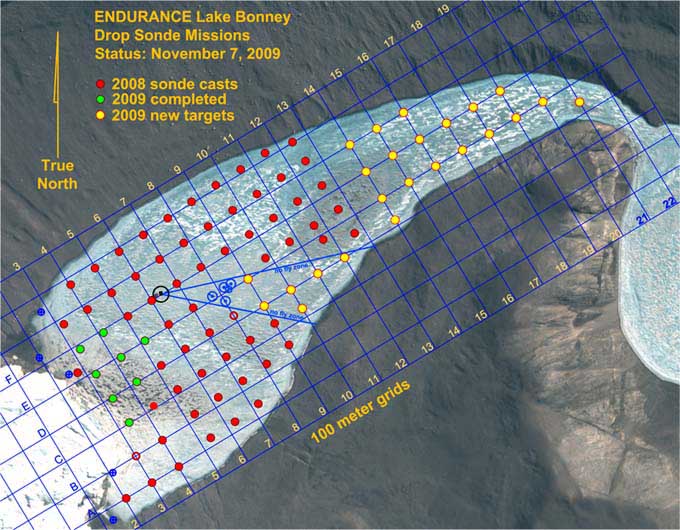