The snow storm went on through the night and into mid-day on November 8. Helo flights were grounded and areas around McMurdo reached Condition 1.

Given the very late finish the previous day most people slept until around 1pm. We left for the lab at 2pm to begin a detailed assessment of the situation that had caused the battery system to shut down at the end of yesterday’s mission. A team meeting was held—always with everyone standing to get to the point—and tasks were assigned. 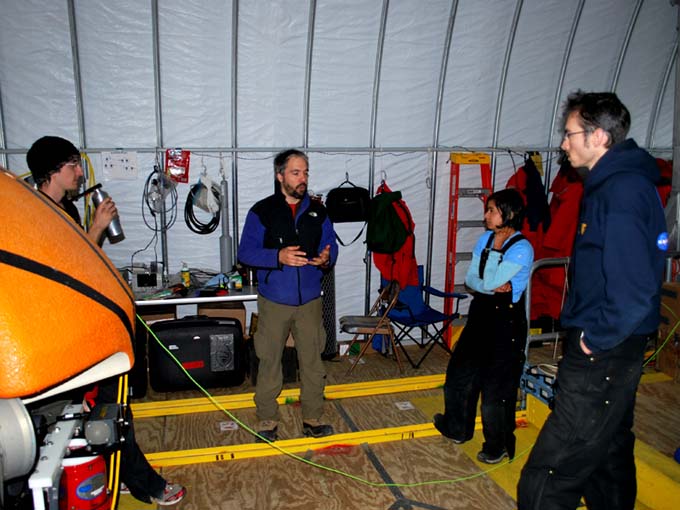 Chris (left), Bart, Shilpa, and Kristof discuss the chronology of the previous day’s mission. The team holds its meetings standing up—so everyone gets to the point of their thinking swiftly. We hold these meetings as needed, mainly in the morning to define the mission objectives and roles, but as needed for brainstorming and debugging.

Vickie and Bill headed off on an ATV with the GPS equipment to locate all of the surface fixes obtained during the tracking of the vehicle. Bill then reduced these data to calculate circular error probable (CEP) for the re-navigation to the 2008 grid points (the main purpose of this year’s mission is to duplicate last year’s data set to observe temporal change in the lake chemistry). The CEP was 1.92 meters, meaning on average the bot navigated to within that radius of the exact GPS point reached last year for the sonde grid points. Some (perhaps the majority) of this error was related to the method by which sonde points were acquired: the vehicle navigated to the grid point coordinates where it then went into “station keeping” where the thrusters maintained that position horizontally while allowing it to rise until it stabilized against the underside of the ice cap (the vehicle was always ballasted about 400 grams positively buoyant for this purpose). This condition is referred to as “ice picking”. At that point the thrusters would shut down. The vehicle is equipped with ice picking stand-off posts with rounded ends with very low friction resistance. So if there is any gradient to the underside of the ice (which is not uncommon) the bot can slide a meter or more on occasion before coming to rest. Even with this variation, the re-location navigation error was well within the five meter radius defined by the science team (Peter Doran and John Priscu) as being good enough for a match to the previous data set. So yesterday’s data set was good, both from the chemistry information acquired as well as its geo-spatial position.

Meanwhile, Bart, Chris, Shilpa, and Kristof went through a detailed review of yesterday’s onboard data log files to reconstruct the incident. The conclusion, as Bart had hypothesized yesterday, was that the batteries had automatically shut down just as the bot was stopping for a sonde point. The data logs showed clearly that the current draw on the power stacks reached 30 amps on fast stop—this depressed the single cell voltage of the lowest cell in the lithium stack and tripped the first battery safety latch. The second battery, similarly already reduced in power, was then tasked with all the remaining vehicle power load and it also then tripped—at an apparent 20% remaining power. Why there would be additional “stranded” power is a separate issue we will investigate in the coming days. In the meantime, Kristof began writing a current-limiting behavior for starting and stopping on high speed transit. Theoretically the voltage depression spiking will be reduced if we limit the thruster current draw and allow us to utilize closer to 100% of the battery. With the batteries now re-charged the system came up normally with all communications re-established and all sensors working normally. We are planning current-spiking tests following the conclusion of tomorrow’s long sonde mission. 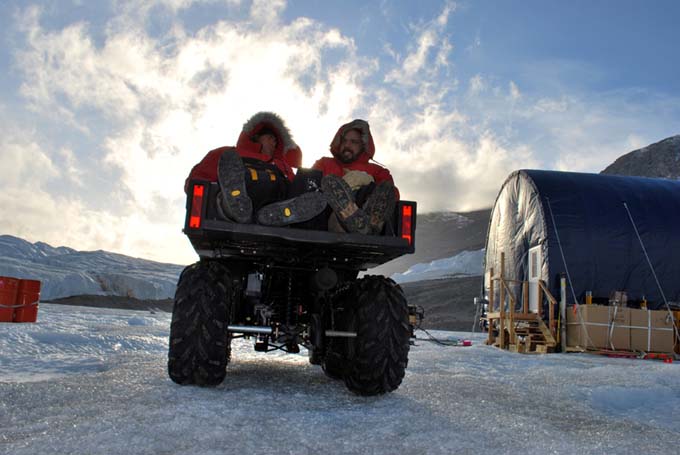 John Priscu (left) and Bart Hogan are bundled up for the drive home after work at 10pm. 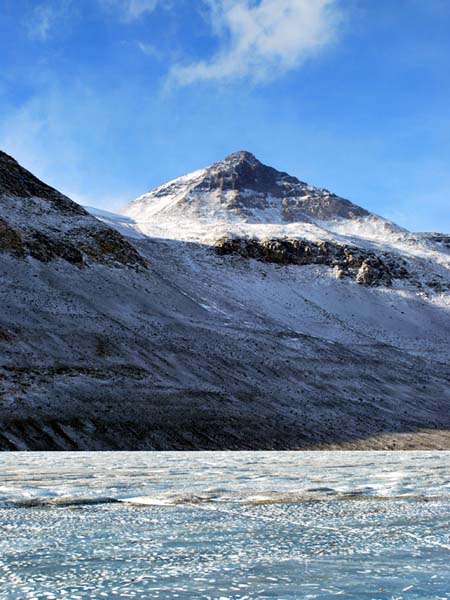 The view out our back door—the Matterhorn peak on the north side of Taylor valley,taken from main Bonney camp.