The past week has been a blur. Bill Stone shipped out to East Lake Bonney main camp on Friday October 22 to guide the assembly of the Bot Garage foundation while the remaining SAS crew continued bot checkout and assembly at the incinerator building at McMurdo. Ten carpenters (“carps”) from McMurdo led by David “Mombok” Story had already flown out to West Lake Bonney the previous day and were camped in an array of small tents on the ice around the melt hole. They had also constructed two “Jamesway” huts (3 x 4 meter half-cylinder habitats made by Weather Haven) and were using those for a mess hall and work shop—environmental regulations do not allow any kind of contaminant to be released in the Dry Valleys so wood sawing has to take place indoors and be vacuumed up. About this time bad weather set in again with strong winds (katabatics) coming down off the Antarctic ice sheet, hitting 30 knots in Taylor Valley, driving wind chill down below -35F. Helo ops stopped for close to two days and the bot did not arrive until Tuesday morning. By that time the overall crew of 15 (in addition to the carps there were Maciej Obryk, Jim Olech, Emma Steger, Loralee Ryan, and Bill Stone) had worked two days to get the lab foundation set out and leveled. Then came the heavy lifting of getting all 16 segments loaded and bolted up, with around 300 connections to be made. 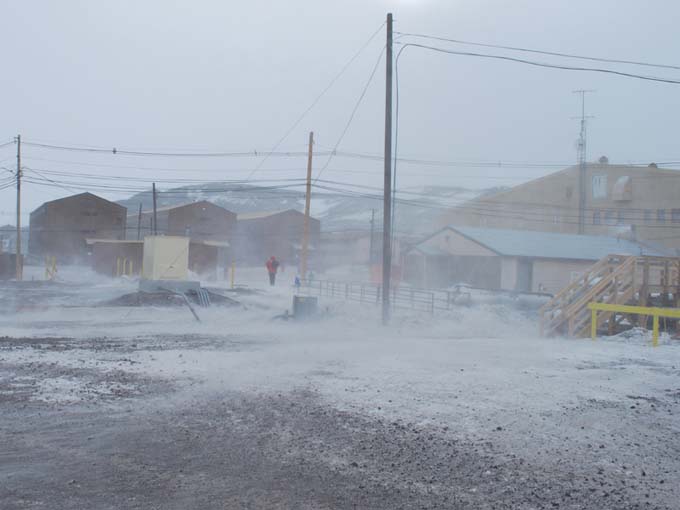 Condition 2 storms grounded most of the team in McMurdo for several days. 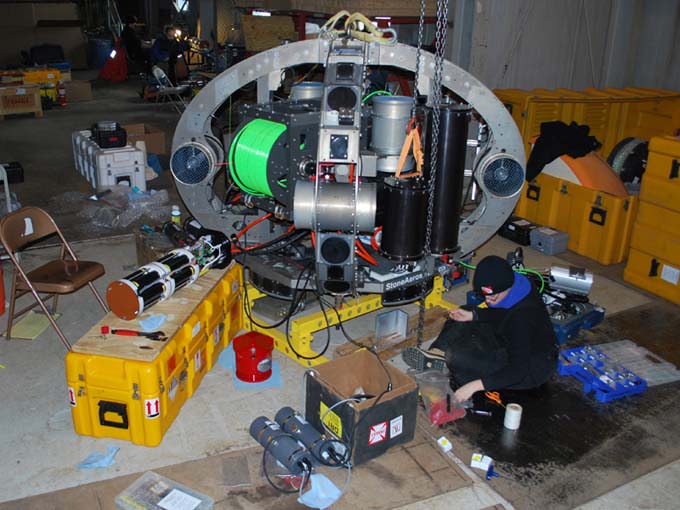 Work continues in the Incinerator. Vickie installs a new mount for the Delta T and the bot is plugged into the new batteries (on orange crate, left) for the first time. 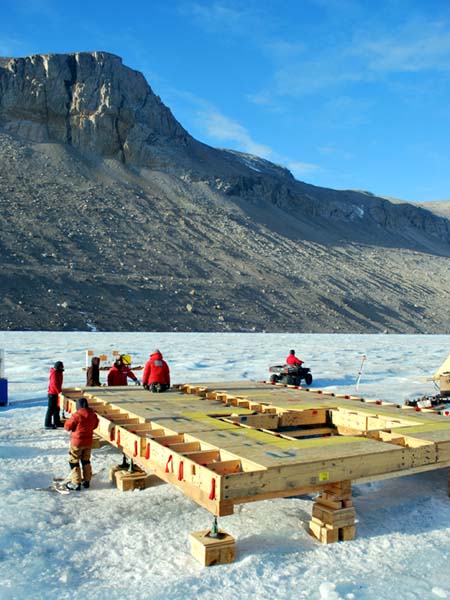 Bill and a team of carpenters work to assemble the floor of the Bot House on Lake Bonney while the rest of the team is wrapping up work in McMurdo.

Life in Taylor valley is cold. Each morning we have to commute 20 to 30 minutes by six-wheeled ATV from ELB main camp to the melt hole (the previous year’s camp at Blood Falls is occupied this season by a small team of glaciologists). The coldest it has been, counting wind chill, was -58F. So you have to layer up and cover every square centimeter of exposed skin and wear goggles. Even with all that the ATV driver’s thumb controlling the throttle will get painfully cold unless you place a heater pad inside the thumb of the glove. The fastest route between ELB and the ENDURANCE melt hole is by following the “moat” ice — a rim of smooth ice surrounding the edges of the lake about 5 to 10 meters in width. The rest of the lake is a series of up to 1 meter high wind blown ridges and troughs that make cross-lake traffic tedious, slow, and bumpy even in a six wheeled vehicle. The moat ice is frequently a criss cross of crack patterns (not unlike the moon Europa’s surface), some of which are up to 15 cm wide and demand attention while driving.

Maciej and Jim have spent the past week running up to four “Hotsy” melt systems—complicated and noisy devices that burn “mogas” to heat glycol which runs through a spiral shaped stainless tube that hangs in the water, slowly enlarging the hole through which ENDURANCE must fit to gain access to the sub-ice lake. Each Hotsy also requires a large generator to power its electric pumps to push the hot glycol through the tubes, so at times the cacophony is the only thing you can hear near the melt hole. These two have been putting in a relentless around the clock effort since the heaters require recharging every four hours, day and night. With some luck the hole will be finished tomorrow. 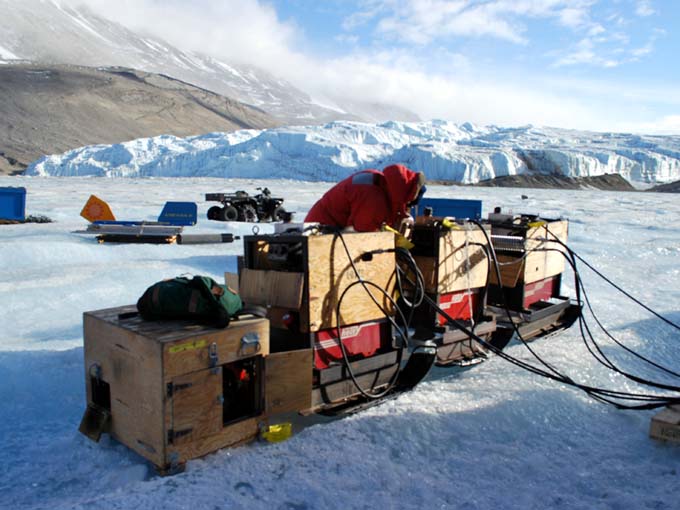 Jim maintains the Hotsy devices that are melting the bot’s hole in the ice.

The morning of October 27 was clear and almost dead calm. Helo ops was back up and delivered the bot with pin point accuracy, landing it on top of the completed platform. A few hours later the remaining six SAS crew (Vickie Siegel, Bart Hogan, Kristof Richmond, Shilpa Gulati, Chris Flesher, Rachel Price) arrived on a Bell 212 at the melt hole. By this time half of the large Weather Haven hemisphere frame was up and in place. By 5pm we had the frame complete and began pulling up the multiple layers of over shell—first an inner layer, then 18 overlapped insulation layers and the final exterior weather layer. Each of these required ropes to be tossed over top of the 8m high arch in order to pull the sheets over and tie them down. By then the wind was picking up again and just managed to get everything tied down before gusts were back in the 15 to 20 knot range coming up the valley. 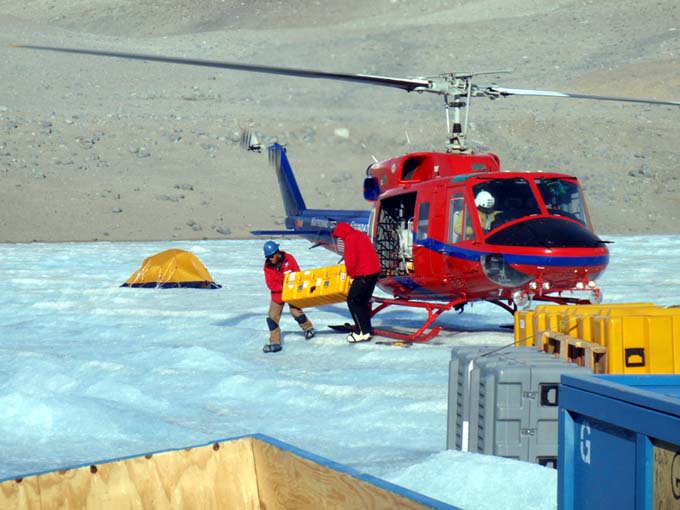 Our new batteries arrive at West Lake Bonney as an internal helo load.

The next two days (October 28 and 29) were spent finishing off the interior of the bot house (getting heating up and running, getting the electric power installed—a 10 kW diesel generator this year) and beginning the unpacking of ENDURANCE gear. By the evening of October 29th most of the vehicle sensors were installed, the profiler servo motors were in place, and one of the new upgrade batteries was completed and loaded into its waterproof housing.

Scheduled for tomorrow: initial power up of the bot for a full systems and sensor integrity check and scouting the location for the sub-chemocline glacier face access melt hole.