The “morning” (we now have 24 hour light—just some hours are dimmer than others because the surrounding peaks shadow the valley) brought the clearest blue skies we’ve yet had this year. It was somewhat warmer, only -14C, and the sun shone brightly as we commuted to work. We found the center of West Lake Bonney considerably more empty than yesterday—all of the carps but Mombok had helicoptered out early this morning. Maciek and Jim continued work on the melt hole—it is now an oval approximately 2.5m x 2m. It needs to reach a circle 2.5 m in diameter before we can send the bot down.

The morning was spent cleaning up the bot house and reorganizing following the arrival of a dozen tables from McMurdo along with a telcom team that installed a solar powered internet link to the Bonney Riegel repeater station. Mission Control was set up and projection screens installed for the main vehicle status, situational awareness, and science instrument displays. The last of the sensors were installed on the vehicle and the second battery was loaded. Around 6pm the vehicle was put on charge while Kristof read off a checklist of all electrical connectors for inspection. Several of us went around the vehicle and checked over a hundred connections while Vickie performed the final assembly of the science payload sonde sensor suite. 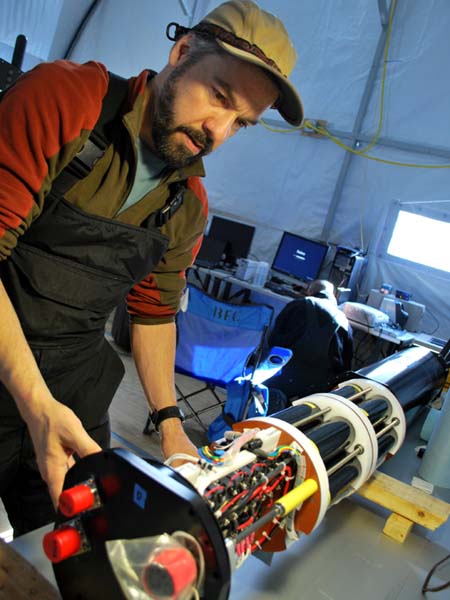 Bart gives the new batteries a final once-over before closing them up in water-tight housings. 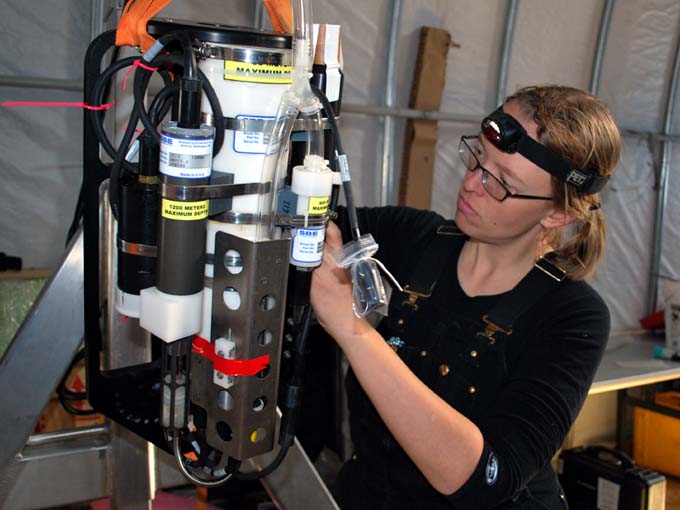 Vickie ties up loose cables on the sonde.

Around mid-day Bill and Maciej drove 400 meters over to the edge of Taylor Glacier to determine a suitable location for an access hole for the vehicle. The idea is complex and will be described in detail later as the mission unfolds, but basically we will drive under the ice to this auxiliary hole and re-ballast the vehicle so that it is capable of exploring under the hypersaline chemocline at 14m depth. The water density shift at that point is so pronounced that the current vehicle would bob like a cork on water at that interface and only an additional 250 kg of ballast will allow it to submerge. We have a permit to take the vehicle beneath the chemocline only at this location. The plan is to then lower the vehicle into the chemocline (using a portable hoist) and release it, at which point it will map the bottom of the lake leading into the glacier. We believe that there is a possibility of a substantial cave under the glacier at the center point of the lake but only an actual exploratory mission will prove this out. 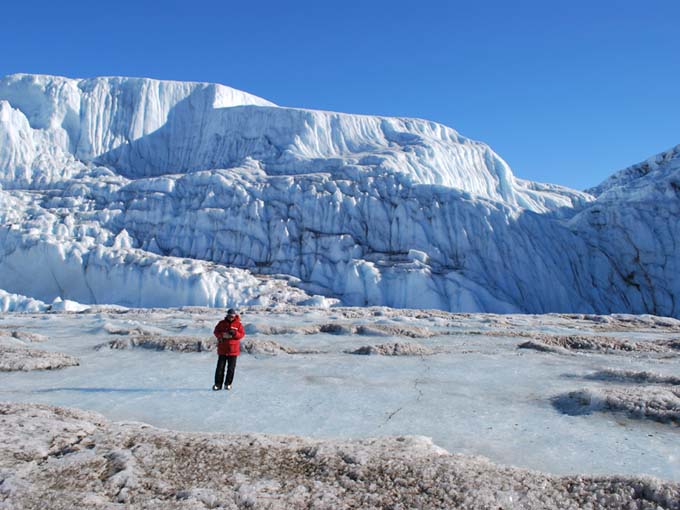 Maciej notes the location where he and Jim will start melting a second hole, about 30 meters from the Taylor Glacier.

With some luck the bot house melt hole will be large enough by tomorrow to perform the traditional “dunk” test to check out vehicle integrity.