The Endurance 2009 mission is underway!

Chris Flesher and Vickie Siegel left the States on Friday night and arrived in New Zealand on Sunday after a twelve-hour flight (ponder that one for a second…). From there it was on to Christchurch, the city on New Zealand’s south island where the United States Antarctic Program (USAP) stages the logistics for running the McMurdo and South Pole research stations.

The next day we went to the Clothing Distribution Center and were issued ECW (Extreme Cold Weather) gear. This is all of the stuff that keeps one alive in Antarctica—things like long underwear, thick socks, snow goggles and so on. The two most important items are the voluminous parka, fondly referred to by all as “Big Red”, and the super warm “bunny boots” (more on those later). We received the requisite flu shots (disease spreads quickly in Antarctica’s close indoor quarters) and sorted luggage for the flight to the ice the following day.

On this CDC visit we were reunited with Maciej Obryk, good friend and Endurance teammate from University of Illinois at Chicago. Boisterous greeting and catching up followed and Maciej introduced 3 new folks we would be working with at Lake Bonney this year: Jim Olech, who will be assisting Maciej with his Long Term Ecological Research (LTER) at the lakes this year; Loralee Ryan, who, after a brief stint of helping the Endurance team, will be working on John Priscu’s Limno team; and Emma Steger, who will be the East Lake Bonney camp manager this year.

After a group dinner we were off to bed, excited to be heading back to the Ice the next day. We all awoke around 4:30 am to a chilly, dark morning and hopped on the shuttle back to the CDC, where the C-17 military jet leaves for McMurdo. We groggily finished sorting our luggage for the flight, weighed ourselves and our baggage for the flight manifest, sat through some briefings, ate breakfast and generally milled around before the flight. Despite the early hour, there was a festive air in the crowd of 130 support personnel and scientists heading down to the Ice. Chris likened the scene to a really big family reunion, one where you don’t know everyone but you recognize many faces, do a lot of gabbing and catching up, and find that everyone is generally ready to enjoy the times ahead. 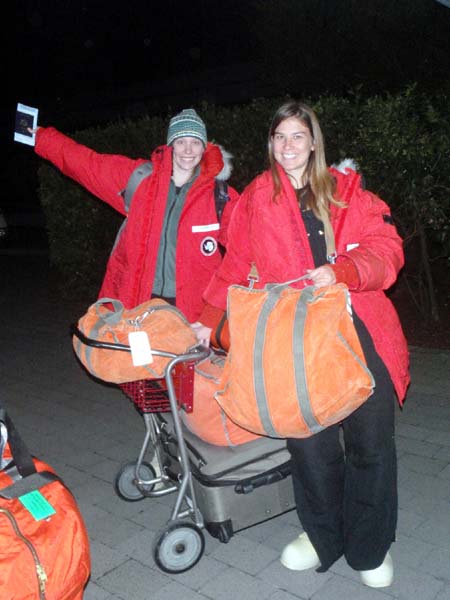 Emma and Loralee break in their Big Red parkas while waiting in line for flight check-in.

As of this writing, we are about halfway through the 5 hour flight. About a third of the group is snoozing. Others are reading, rocking out to their mp3 players, or pursuing half-shouted conversations over the engine roar. More briefings await us this afternoon and there are trainings to attend tomorrow. That done, we will be reunited with the Endurance robot, which has been safely stored away in McMurdo over the Antarctic winter, and work will begin! 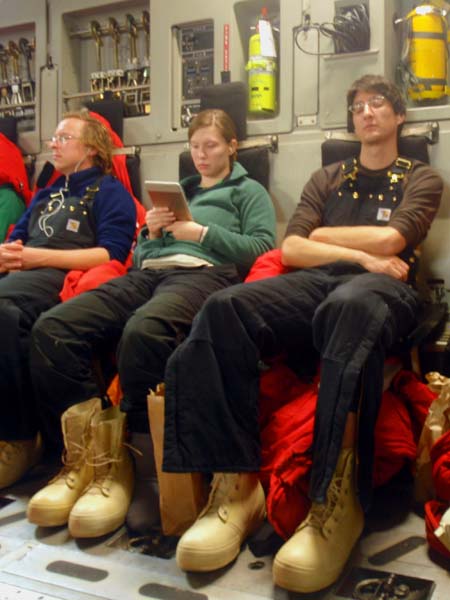 Jim, Emma, and Chris employ different strategies to pass the time on the 5 hour flight. 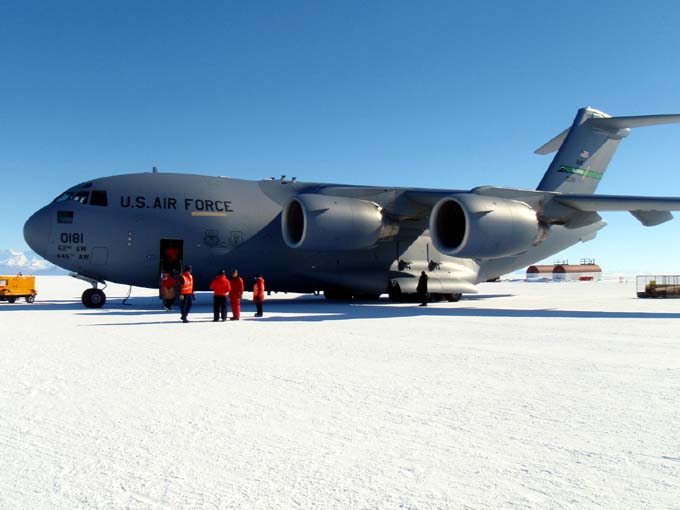