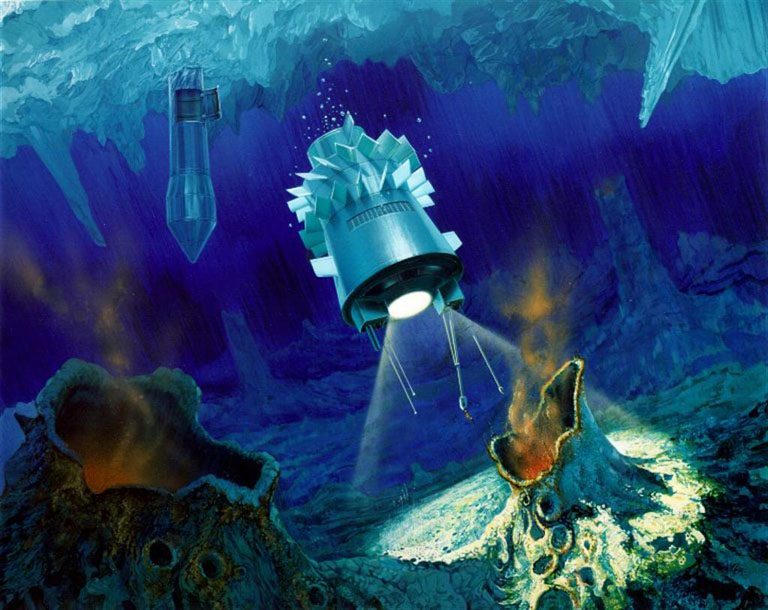 Artist’s impression of a cryobot breaking through Europa’s ice shell and deploying a marsupial rover for exploration. Photo Credit : NASA/JPL

This post is actually a bit old, but here goes:

In a nutshell, you can think of VALKYRIE as a big, slow melt-torpedo. The nose is heated, and melts the ice in front of it, and the robot sinks downwards through gravity. Heat-based cryobots have several design advantages over drill-based penetrators because they are mechanically passive (less moving parts to break), and can be more sterile (more on this momentarily). On Europa the best way to provide the heat energy for both melting and powering the vehicle would be though a radioisotope thermal generator, but here on Earth procuring the radioactive element is a bureaucratic near-impossibility because of nuclear non-proliferation treaties needfully locking down the manufacturing and distribution of such isotopes because of potential weaponization. With VALKYRIE, we’ve side-stepped the problem by using a high-powered surface-based laser shot down a fiber optic cable to heat the robot. It is truly an underwater robot (Stone Aerospace’s specialty), because as the robot tunnels downwards, the melt-hole will fill with water. Not in Alaska, but in colder places where we plan to go in the future, such as Antarctica and Europa, the melt-hole will actually refreeze behind the robot, sealing it in its own “melt-bubble” as it travels downwards. Unlike with a drill, where if the bore-hole ice refreezes, you risk bit breakage, with a cryobot the refreezing is actually a feature. 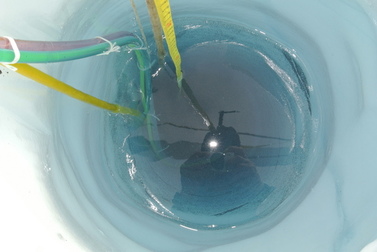 One of the greatest concerns for any Earth-based or extraterrestrial ice-penetrating robot is bio-contamination – whether tunneling into a sub-glacial lake or Europa’s ocean the penetrator risks carrying chemical and biological contamination into these pristine environments that have often been sealed off from the surface world for millions of years. Because the melthole refreezes behind a cryobot, there is never a direct link between the target environment and the surface. Furthermore, because a cryobot is an underwater robot, it is hermetically sealed, and much easier to pre-sterilize by dunking it in a sterilizing bath that can work its way into all the nooks and crannies of the machine in a way that a a regular cleaning could not.

One downside of a heat based penetrator is that if you are not in contact with ice, you cannot make forward progress. This could happen if there are sediments trapped in the glacier, which, as you melt through the ice, settle to the bottom of the melt-hole. Soon enough, the nose of the robot is resting on a pile of dirt, not ice, and you are stopped in your tracks! With VALKYRIE, we use water jets to address this problem. As the vehicle descends, it actually sucks up the melt water, runs it pasts the super-heated laser “beam dump” to heat it, and shoots the hot water out the front as a series of jets. The jets serve to blast any sediments back into suspension in the melt water, and also allows us to melt though the ice more quickly. The robot can also slowly turn by directing its jets at an angle. 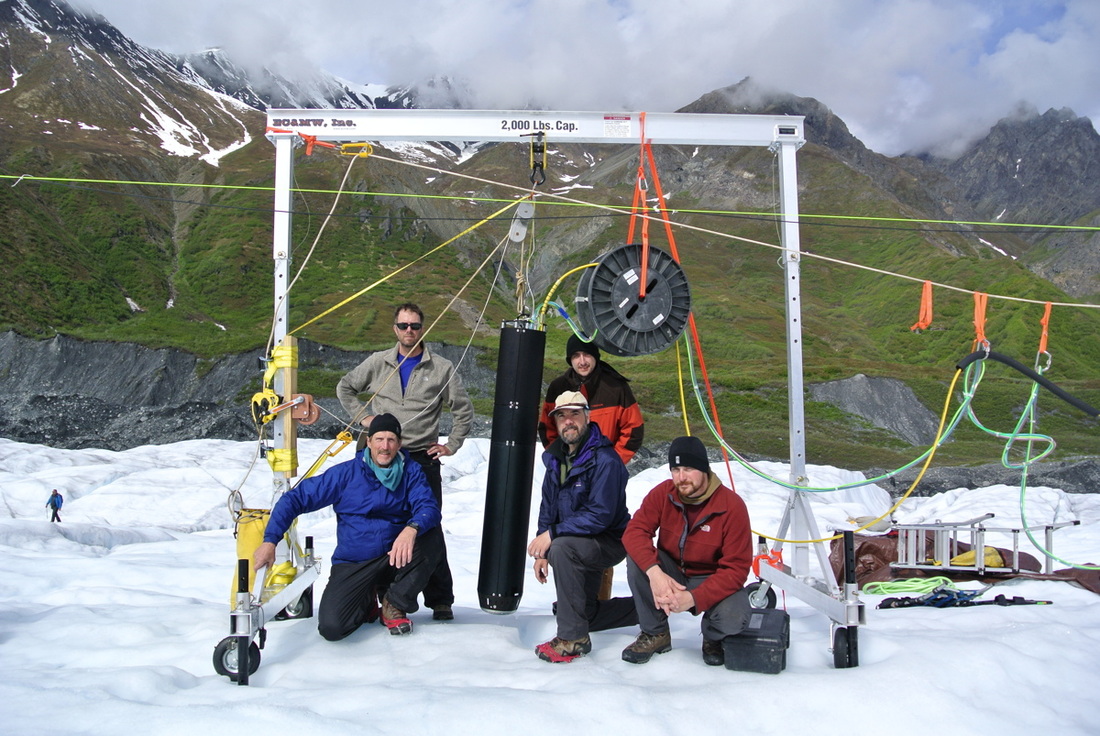 Last year’s mission (also on the Matanuska, I was not present) was all about proving the basic physical concept of VALKYRIE. The Stone Aerospace team was able to show that the concept works well, penetrating 30m down into the ice, with nothing stopping going deeper except that we came to the end of our fiber optic cable for the laser. Importantly, the hot water jets dealt effectively with the problem of sediment buildup at the bottom of the hole, and we were even able to try some basic lateral maneuvers using the side jets, although it didn’t work as well as we’d hoped (we ended up cutting “mickey mouse ears” using the side jets, instead of one side channel we could turn into). But with some reconfiguration of the side jet geometry, in the future we should be able to turn in ice to avoid obstacles or angle towards targets of scientific interest that will be identified by ice penetrating radar incorporated on the robot. We did not have any major science instruments aboard VALKYRIE last year, as the expedition was about physical proof of concept.

This year, the primary objective is to test the brand-new “science package” aboard the vehicle – a water sampling system that can redirect the melt water into sample bags or filters for the glaciologists to analyze upon return to the surface, and a flow cytometer, which analyzes the florescence spectrum of contaminants in the melt water and can determine the amount of minerals, bacteria, and chlorophyll proteins that are encased in the slice of glacier ice the robot is traveling through. The flow cytometer can also be used to autonomously trigger the water sampling system if it sees something interesting – a very early precursor of decision-to-sample and autonomous intelligence a penetrator robot on Europa will need, where no group of scientists can look over its shoulder to give directions in real time (it takes 30 min – 1 hour just for radio waves to travel from Jupiter to Earth, depending on the alignment of their orbits). These new instruments are encased in their own separate pressure vessels, and were added to the top of the robot, so VALKYRIE is now getting quite tall! 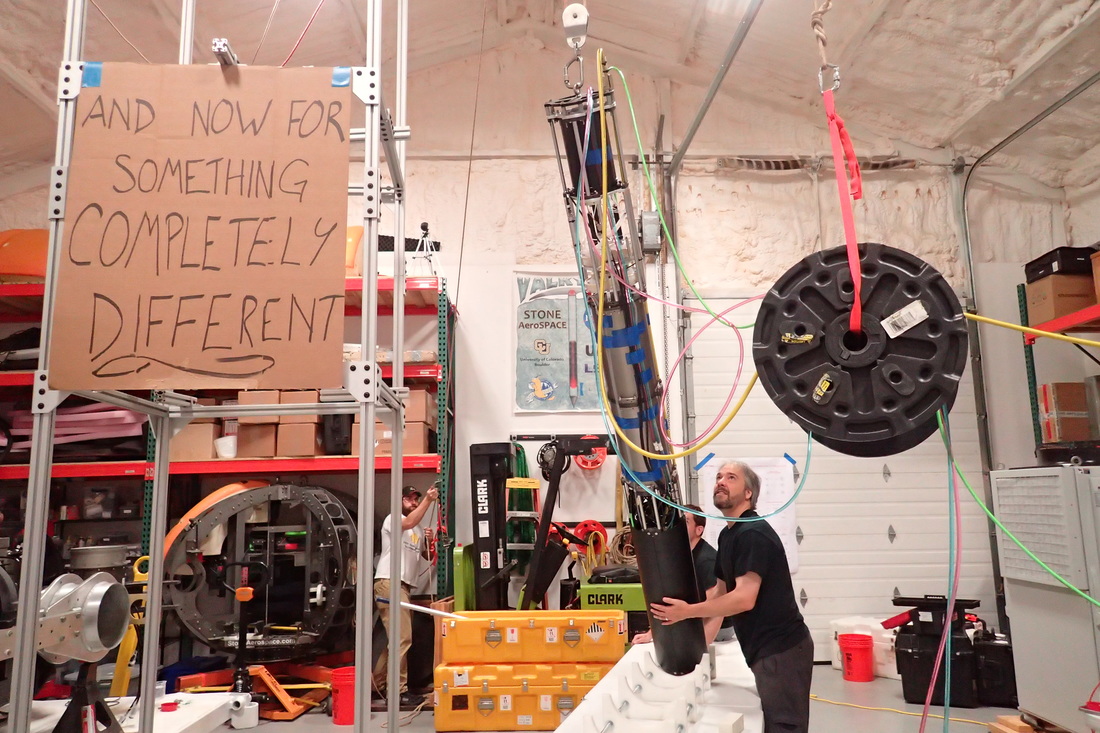 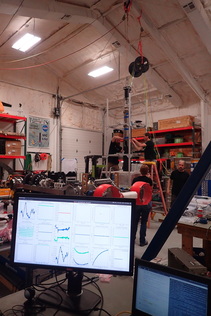 The view from mission control

I am able to do most of my software work remotely from California, but a few weeks ago, I made my ~tri-weekly trip back to Stone Aerospace headquarters in Austin with two goals in mind: to assist the final hardware/software integration of the “science package” onto the robot, and to simulate a VALKYRIE mission by melting the robot into a big block of ice in lab. The simulation served three purposes: to make sure that all the hardware systems that worked last year still work now (and will not lead to a nasty surprise on the glacier), to test the new systems, and to get me up to speed on the quirks of last year’s software, so I can operate the robot and fix any bugs that may arise on the glacier. Although I have been the main software developer for the new science package, I did not have a hand in creating the previous VALKYRIE software, so Chris “Bacon Boy” Flesher imparted to me his wisdom. 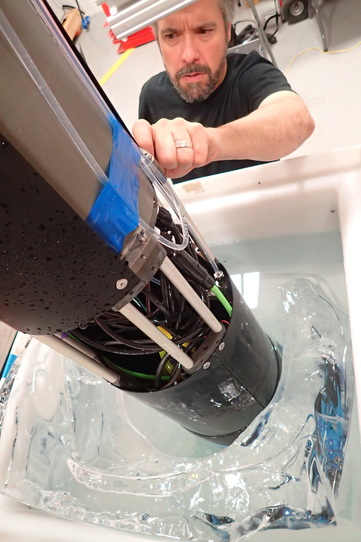 The tests went well. We integrated the science package on to the robot, everything worked (old and new), and we were even able to fix a long-standing electrical problem where the jet pumps were injecting high-frequency noise into the robot chassis, causing some of our sensors to sporadically and temporarily stop streaming data. In the middle, we weathered out a tornado warning in Bill’s basement, and I saw more rain than I’ve ever seen before, due to the historic Texas flooding. When I left, the rest of Austin-based team was packing the robot and the final items into the U-haul bound for Alaska. Josh and Vickie will drive it North, and several other team members will fly up to assist with basecamp set-up and logistics. Some other Stone engineers, scientists from various universities, and I will fly up to join them on June 15th. The next time VALKYRIE will touch ice will be on the Matanuska! 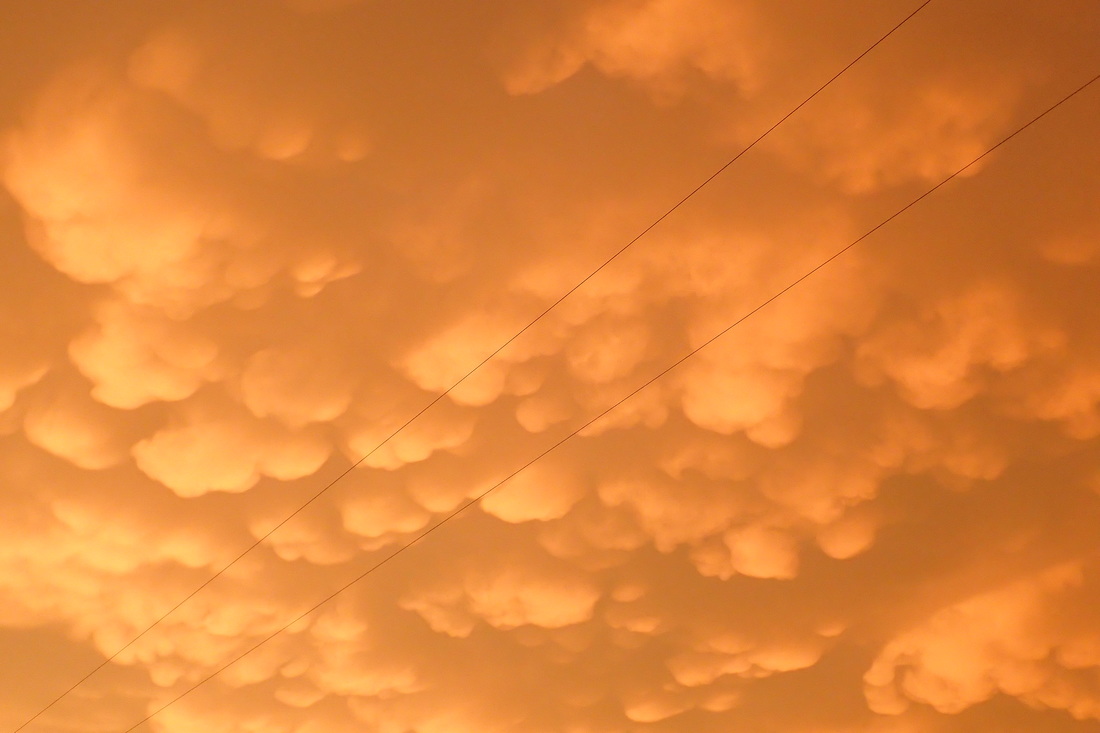 Beautiful clouds over Stone Aerospace headquarters after the storm had passed.

Also, a new article about the 2015 VALKYRIE expedition has come out on Space.com! You can check it out here.