Conditions Throughout Our Field Season

Eight of us are headed to McMurdo Station (sans ARTEMIS) on August 26 (weather permitting) as part of ‘Winfly’ (Winter Flight), the first grouping of flights to go to McMurdo since winter began. Our Winfly crew will work to select the best site to establish our base camp on the sea ice, and to set up as much of our gear as possible before ARTEMIS and the Mainbody crew arrive in October.

The amount of daylight we see will change drastically during our time at McMurdo. When the Winfly crew arrives in late August, the length of day will be changing very quickly, but the sun will only actually be above the horizon from 10am to 4pm. By the end of September, the sun will still set each day, but only briefly, and it will never be completely dark. In late October, the sun will quickly dip below the horizon for the last time, leaving us in round-the-clock daylight for the rest of our time at McMurdo (we leave when the sea ice becomes unstable in early-mid December). The figure linked below illustrates how lighting conditions vary at McMurdo throughout the year.

Lighting conditions at McMurdo throughout the year. (image: Ethan Dicks)

The temperatures we’ll experience will vary quite a bit from August to December as well. The figure linked below shows NIWA data for Scott Base (a Kiwi base next-door to McMurdo) plotted by the folks at metservice.com (check out their blog!). Note that the mean daily Maximum temperature is -23.4C in August, and rises to -1.2C in December… but cold days can be very cold, and high winds can be extremely dangerous. We fully expect to lose multiple working days to extreme weather conditions, especially early in our season. 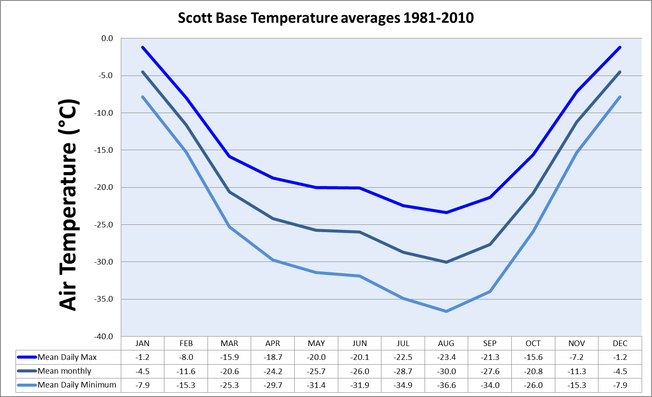